Today’s title is slightly inaccurate. Although last night was another race in the Summer Series, there was somewhat of a twist. The sky had opened up all over Charlotte, dropping buckets of rain in random spots across the city. According to the race promoter, the trails at Colonel Francis Beatty Park were in good shape. In spite of some pot-stirring riders posting on the Tarheel Trailblazers website saying that it had rained down there, the race was still on.


I hurried from work to the B-43 Worldwide Headquarters to pick up Lunchbox and our gear, and we headed down the road to Beatty. It started raining as soon as we got on the road, but that wouldn’t stop us. The storms were so scattered that it was entirely possible that no rain would fall at the race location. We kept going in an attempt to get in a race. When we arrived on the scene, we noticed that the promoter was indeed correct: the trail and surrounding area was in pretty good shape. I unloaded the bikes and proceed to spin around for my warm-up.


When it looked like the race was still gonna happen, I quickly put on my riding attire, complete with a new addition. I mentioned yesterday that I would be unveiling something new, so here it is: 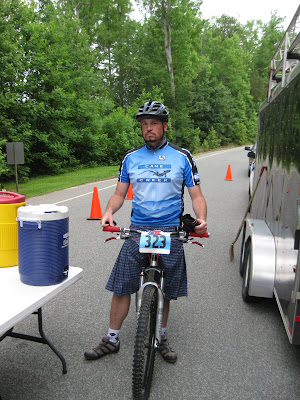 What the hell? Is that guy wearing a skirt?

No dumbass, it’s a kilt. We like to do things differently here at B-43, and this is just another example. While I may never be the fastest rider out there in these races, I can still be the sexiest. Riding in a kilt is a symbol of our commitment to being different, and to do things that no one else will do. Little Miss Sunshine whipped this thing up in her sweatshop, and I am proud to wear it. The freedom you feel while riding a bicycle in such a garment is awesome, but the added weight will probably slow me down. Who gives a shit, since I can’t get much slower than a turtle’s pace anyway. You know you want one.


So while it takes a real man to wear a kilt in a bike race, I wouldn’t get the chance to show that last night. Just as I completed my warm-up lap, the sky opened up with a torrential downpour. It rained cats and dogs, complete with thunder and lightning. The race promoter was forced to call off the race, so I was left standing there in my soggy kilt. No worries though, I’ll just rock it at the next race. You have been warned.


Since I was a little scatterbrained yesterday, I seemed to have forgotten about a product review I promised you da udda day. When we went on our ride at Warrior Creek last Saturday, the Dirty Party Cycle brought along a new (to him) accessory. Yes my friends, the DPC has jumped on the Awesome Strap bandwagon. He unveiled his little bundle of Awesome to me just before the ride, and after a few adjustments, we had it firmly secured to his seatpost. He was immediately impressed with how tightly it held onto his bike, and couldn’t wait to see how well it worked on the trail. After completing the whole loop, we stopped to check out his new little bundle of Awesome. 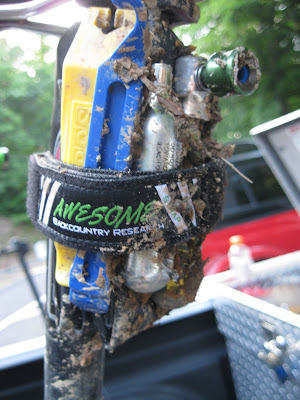 Although it got a little muddy out there, it stayed put. In fact, I don’t remember him even checking to see if it was there while we rode. He didn’t seem to notice that it was on his bike until we finished, so I would call that a success. The Dirty Party Cycle has made his new little Awesome Strap dirty as well, so why don’t you go out and get one? Everyone’s doing it.

Oh yeah, another local Charlotte rider has joined the Awesome revolution (thanks to my review), but I didn’t get a chance to get any photographic evidence last night. I’ll probably get his take on the new little bundle of joy in the near future, but for now you will have to wait. Are you tired of me talking about the Awesome Strap? Well then, go out and buy one and maybe I’ll shut up about it. Nah, I’ll probably not ever quit talking about one of the greatest bicycling inventions I’ve ever seen. It looks as if you’re stuck with it (and me.) See y’all tomorrow.
Posted by TheMutt at 8:50 AM