Since we pretty much got shit on by storms on Friday night here in the Charlotte area, I started to wonder if we could even get out on the bikes over the weekend. With all of the local trails closed due to the onslaught of rain, my previous plans of a trip to the mountains started to look like a sure thing. Well, not too sure since they also received a nasty storm in Wilkesboro, the site of the Burn 24 Hour Race. After checking the internets and finding out that the race was still on, we figured we would head up for a visit, and also partake in some of the other trails at the Kerr Scott Trail System.


I called up the Dirty Party Cycle to let him know that it was still on, and he made his way from the other side of town over to the B-43 Worldwide Headquarters. We loaded up our crap, stopped for a quick bite to eat, and we were on our way. After an hour or so of driving, we arrived in North Wilkesboro. We decided to visit our racing friends first, so we headed across the dam to check out the Burn pit area. This is what we saw: 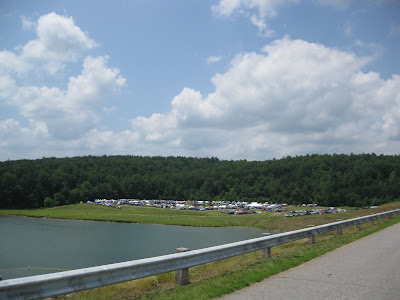 Since it was a 24 hour race, the pit area looked more like a campground. We parked, grabbed our bikes, and made our way through the crowd to find our peeps. First up was the Dirt Diva team, where we would find the MadSS, his Mrs., and a slew of other local Charlotte riders. We happened to catch the MadSS and his significant other getting ready to head out for a lap, so we got to hang out with them for a while. The MadSS was planning on hitting the trail to give his wife some on the trail support, so we didn’t get a whole lot of time to chat. This would mean that he wouldn’t ride with us on one of the other trails, but he sure was being a good husband. I wonder if Little Miss Sunshine would let me push her around during a race. Hmmm. 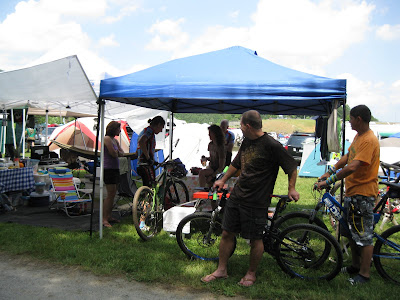 I wonder what the DPC and Lunchbox were looking at. Maybe they were contemplating doing a 24 hour race. You never know.

We hung around a bit, and I hoped to gain some insight into how someone can ride a bike for 24 hours without falling over dead. I soon discovered everyone’s secret, when a lone rider came up to refuel: 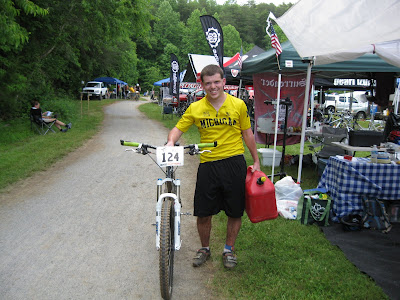 Apparently, this guy ran out of gas, and had to scrounge up some fuel to continue the race. I originally thought that the people that race these super-long endurance events were superhuman, but I realized that they have some kind of engine on their bikes, fueled by petroleum products. And you thought that using performance-enhancing drugs was cheating. Well, I guess it’s not cheating if everyone is doing it.


After saying goodbye to our friends, we loaded back up in the truck and headed over to Warrior Creek so that Lunchbox and the DPC could see what all the fuss was about. I had heard that the trails around there were a little muddy, but they were open and we were gonna try it.


We hit the trail, and I tried my best to be a tour guide. Even though I had ridden several laps there in the last month, I still wasn’t very familiar with the trail. We couldn’t go as fast as you normally would, since some of the corners and downhills were a little slick. Even the climbs were a little more difficult since they were muddy. We pressed on though, and stopped along the way to see some of the trailside features. 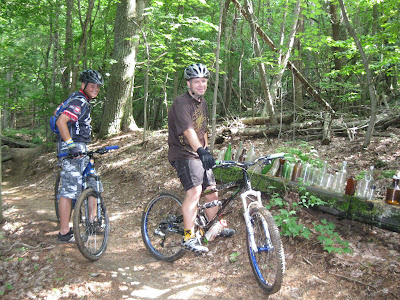 Even though Lunchbox isn’t old enough to drink, we stopped at the bar.

I managed to get up ahead of Lunchbox to setup for a photo, but this really only happened once. He’s so much faster these day that I can’t whip out the camera fast enough to catch him. I got lucky this time though: 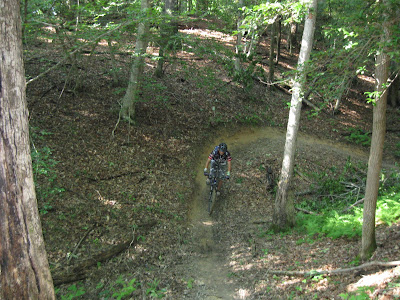 In keeping with the spirit of the coincidence number, we noticed our good friend 43 when we were heading out: 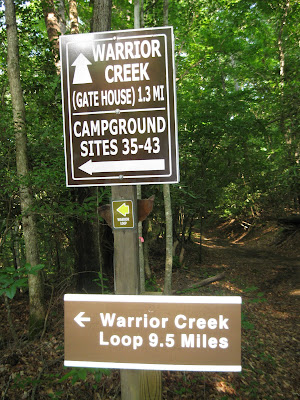 When we finished the loop, we were a little muddy, but not too bad. The bikes would need a little love when we got home, but I wouldn’t call it a totally muddy ride. Here is the proof that it wasn’t that bad: 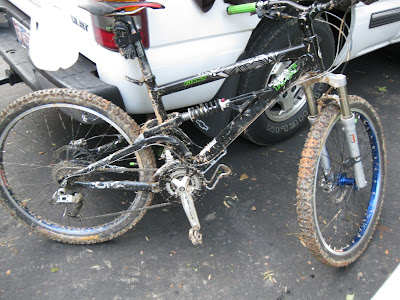 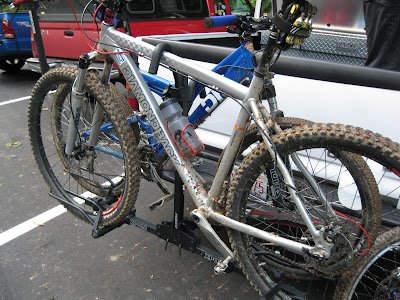 The Big O and Clark are Dirty Cycles too, but without all that partying.

I guess that’s about it for the recap. The fellers had fun, but I felt bad that their first time out there was in not so perfect conditions. Hopefully we can make another trip back there when it’s dry, so that they can experience the full on hell-speed you get on those super-fast berms and downhills. It was a good day of riding, but it could have been better if it wasn’t slippery everywhere. Oh yeah, there will be a product review tomorrow, thanks to the Dirty Party Cycle. He finally came around, so I’ll tell you all about it.
Posted by TheMutt at 8:36 AM