Virginia Is For Lovers 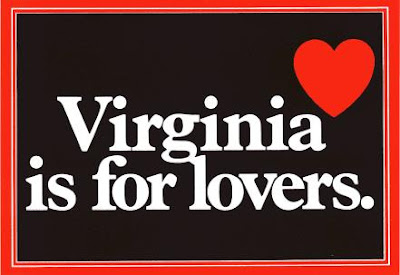 Well, sort of. I know that’s the official logo of Virginia and all, but I didn’t get any love from the trail during the Shootout On Anglers Ridge yesterday. Even though showing up to race on a course I’ve never ridden on is against my better judgement, I did it anyway. While it wasn’t disastrous by any means, it was a tough, tough day.


Lunchbox and I left the B-43 Compound at about 6:45 yesterday morning, headed to Danville, Virginia. My race started at 10:00, so I wanted to be there about an hour early so I could sign in and get a proper warm up. The warm up would never happen, due to reasons beyond my control. We arrived on the scene around 9:15 or so, and one of the kind volunteers directed me to park along the road. We got out of the truck and looked around, and it wasn’t real obvious as to where to sign in. There were official-looking tents everywhere, so we walked over to the one that housed the start/finish line.


When we got there, no one said a word to us. Luckily, I ran into one of my pals from our local Summer Series, and he told me where the registration area was. We walked up to the tent, and they asked for my name, USA Cycling license, and gave me my goodie bag. No instructions whatsoever. I headed over to the start/finish line and got ready to race. 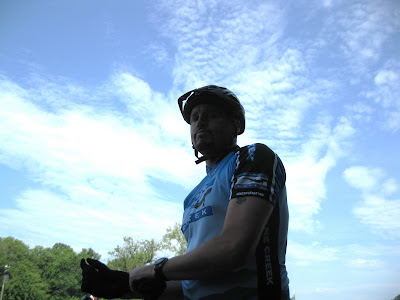 With all of the time I wasted trying to find the registration area, I realized that I would get zero time to warm up. This was confirmed when I saw this Tyler Durden-acting guy walking around shouting instructions through a megaphone. You couldn’t really hear what he was saying, but you could tell he was trying his best to be authoritative. I was able to snap a picture of him after the race, since he continued to shout orders at us through the megaphone after it was all over. 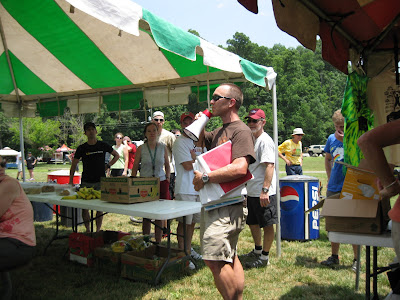 So yeah, I was a little annoyed. Not a big deal I figured, since I had to do two laps. I would get good and warmed up on the first, and put the hammer down on the second. A brilliant strategy indeed. I saw a mass of racers gather around the start/finish line, so I headed over there. After trying my best to listen to the pre-race announcements (his incoherent babbling was difficult to understand), we all headed over to line up for the race. As the different classes were taking off, I strained to hear him call out who was up next. Finally, some guys in my group edged closer, and we all realized that we were getting ready to go. After the signal was given, we took off. Everyone took off pretty slowly on the paved road, and I wondered why. I decided to sprint a little bit to get up to the front of the pack. 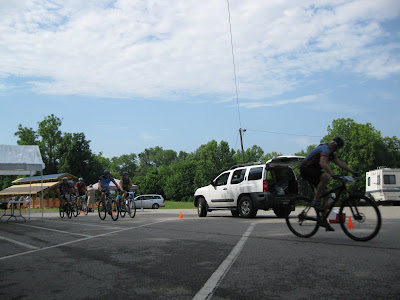 I entered the trail in second place, with the rest of the pack close behind. I stayed on the wheel of the guy in front of me, and the guys behind me slowly started falling off. The pace wasn’t crazy at all; in fact it was manageable. Eventually the guy in front of me told me to pass him, so I obliged. Wow, I thought, I am in first place. All I had to do is keep up that steady speed and the race would be in the bag.


As the first two miles went on, the last few guys in the back of the pack were out of sight. Suddenly, out of nowhere, one guy in my class took it to me on a long climb. I was started to feel the effects of my non-warm up, so I gladly let him by. I would get him later, or so I thought. A few minutes later, another guy went by. We weren’t flying down the trail at all, but we were moving along rather quickly. I was in third place, but that all changed in an instant when yet another guy overtook me. The hills were starting to get to me at this point, but I tried not to let it affect me mentally. I was still within striking distance of the top three, so I still wasn’t worried.


When we approached mile marker 3.5, I knew I was in big trouble. My legs didn’t want to work properly (thanks to a ride the day before), and my breathing was horrible. It was hotter than Satan's ass crack out there (95 degrees), so the heat was wearing me down as well. Another rider went by me like I was standing still (I almost was), so now I was in 5th place. First through third were long gone by now, so my only hope was to recover during the rest of the lap so I could catch up. I watched as fourth place disappeared into the distance.


I maintained my 5th place throughout the rest of the lap, but I wasn’t getting any faster. When I hit the ½ mile to go marker, I shifted into the big ring and let ‘er fly. I crossed the start/finish line after about an hour, and I found Lunchbox waiting for me with a fresh water bottle full of Cytomax for my refueling pleasure. The exchange took less than three seconds, and I was on my way.
Since I’m a little long-winded today, I’ll stop here. Tomorrow’s episode will be the conclusion of the Shootout On Anglers Ridge (my version anyway), along with a course review and a summary. Doesn’t that sound exciting? Sure it does. I like to keep you in suspense, so why ruin it? 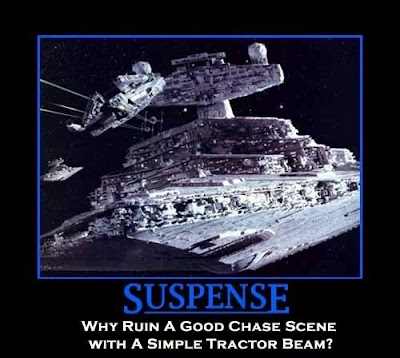 You are not a beautiful and unique snowflake. You are the same decaying organic matter as everyone else, and we are all part of the same compost pile.

I am the all-singing, all-dancing crap of this world.... I am the toxic waste by-product of God's creation.