Let’s talk about my “other” bike, TK421.  You know, the geared one.  Lately I’ve been talking about taking the gears off, but I had a hard time uh, finding the time.  Some people might think that I’m chickening out.  I get that.  Others might even think that I just plain forgot.  Well, it was a little bit of both I guess.

But, the time has come to get rid of that shifty shit. 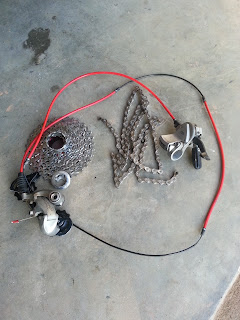 It took less than one beer to remove the shifter, cable, derailleur, chain, and cassette.  The rest of the beer was spent putting on a 20 tooth Endless cog and lining up the spacers I got from MisfitPsycles.  Somehow, I put them in the right spot on the first try.  And when I put the SS chain on, I had the perfect chainline. 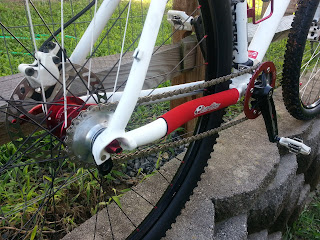 What’s with the bash guard and N-Gear Jump Stop on there?  Well, for one I was too lazy to take them off.  The most important thing though, is that it will be just fine for me to leave them on there.

Also, I was able to get good chain tension without the use of a tensioner, or even a half-link.  I are happy.

Anyway, I guess now I have another “new” single speed. 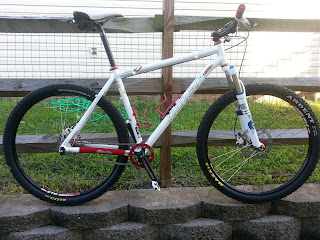 So other than the road bike I take out about twice a year, I won’t have a geared bike to ride.  I’m pretty damn excited about that.

In fact, it makes me want to do a little dance.