As soon as I hit the trail after aid station number two, I knew I could finish the race.  A short climb over some railroad tracks and I was heading towards the steepest trail on the course.  After a creek crossing (which I almost fell in due to mishaps of the riders ahead of me), I saw a wall that signaled the start of Star Gap.  Rather than let that break my spirit and slow me down, I threw my bike over my shoulder and practically ran up the first climb.  After that I would have to climb up switchback after switchback, passing several more people on my way to the top.  You know what made it even more difficult?

Trying to take a photo while I climbed. Nearing the top, I slipped on a root and almost tumbled down the side of the mountain.  I decided that I was too tired to ride so I hopped off my bike to start walking.  I wasn’t that tired though, because there was no way in hell that I would stop moving forward.

Well, except to take a quick photo after I almost fell to my death. 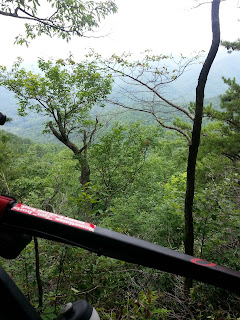 Being a little familiar with the course now, I knew that I only had one more small climb to go after that.  I got back on the bike and mashed my way up to the top of Star Gap.  There is a clearing where the trail intersects with Heartbreak Ridge, and I saw a course marshal waiting there to point us in the right direction.  It was my man Mike P., and he wished me well as I prepared to collect my reward for all that silly climbing.

Still without a working rear brake and less than ideal rear tire pressure, I slid back off the saddle and took off.  I passed several people as I flew down the steep descent; navigating the tricky switchbacks much better than the last time I was out there (it was raining back then.)  I even managed to crack a smile from time to time, because I knew that the most difficult part of the race was behind me.

After blasting by one guy resting on the side of the trail (on a downhill for some reason), the trail opened up and I knew I was almost at the end.  It spit me out on pretty fast, and I suddenly had plenty of energy.  The fire road that is Jarrett Creek is really wide open and mostly downhill, but there are a few climbs in there.  Normally they wouldn’t be a big deal if I hadn’t just climbed Star Gap.

On the first climb I put my head down and mashed my way up.  I passed a few people once again and I was feeling good.  The downhills were tricky since my tire pressure was so low and I nearly washed out on a few high speed turns.

“Oh shit”, I thought, “Don’t let me crash here and mess up everything I’ve done so far.”

On one particularly steep climb (relatively speaking of course), I had to stand up to make the last few feet.  That’s when the cramps finally hit me.  My left calf locked up, and I couldn't even move my foot.  I hopped off my bike and screamed out loud in pain, massaging my leg to make that shit go away.  I tried like hell to get my foot clipped back in, thinking that if I started pedaling again it would go away.  I finally got my cleat locked in, and although the pain was awful it eventually subsided enough for me to keep moving.  I rode downhill again and tried to massage it out, and for the most part I think it worked.  I just had to make sure I didn’t get off my bike again until the finish…

About nine miles away.

On the next climb, I settled in and make easy work of it.  I knew that if I kept up my momentum I would be okay, but I was afraid of a mishap that would force me off the bike.  Just as I started to crest the hill, I spotted my man Ritchie  on the side of the trail messing with his tire.

“Do you need anything?" I asked (knowing damn well that I couldn’t stop to help.)

“I could use some CO2” he admitted.

While I was grunting up the last few feet of the climb, I reached into my pocket and grabbed two CO2 cartridges that I had taped together.  I tossed them back over my shoulder, hoping that they didn’t roll down the side of the mountain.  I apologized and told him that I couldn’t stop for fear of falling over, and he understood.  I hoped that he would be okay, but I had to shift my focus back on making up one more stupid climb.

When I got to the top, a familiar sight from the ride that TomTom and I had out there let me know that it was all downhill from there to .  I took a couple of spins to get up to speed, tucked in, and flew down the hill.  Before I knew it I was at rest stop number three, which I politely blew by because I still had one full bottle.  I took off down and headed for town, knowing that there was no way I would die out there in the hills.

I was relieved for sure, but I wasn’t really looking forward to the last few miles.

Once the road leveled off, I made a right turn and headed towards town.  That part was really flat, and my big, spinny 32X21 really sucked.  A couple of people with gears went by me, and I have to admit that it frustrated me a little bit.  If I had a geared bike, I would’ve been able to shift into the big ring and let it fly.

Screw that, I’m a single speeder now.  Run what you brung, as they say.

I found myself wishing for the road to go up so I could at least stop spinning so much.  Out on the open road, in the hot sun with no way to speed up made me feel like I was wandering across the desert dragging a dead horse.  After what seemed like forever I saw a police officer at an intersection to guide me towards the finish line.

My spirits lifted, I sped up and headed for the end. 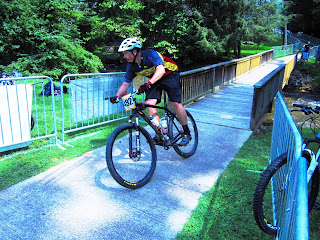 I did it.  Even though I don’t quit when I race, when I signed up I really didn’t think I would finish this one.  Instead of barely dragging my ass across the finish line, I rode through with my hands in the air, not feeling at all like I had just ridden a single speed in Pisgah for three hours and thirty seven minutes.  I wasn’t really that tired, which surprised the shit outta me.

Another surprise came a little later when I saw the results:  4th place in the single speed class. 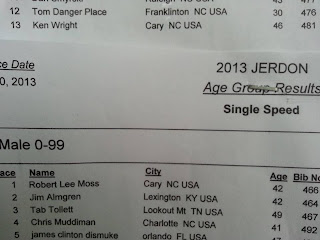 Not bad when the best result I had hoped for was DFL.

You know, if I even finished at all.

I ate a little food, drank a little beer, and cheered the rest of the racers coming across the line.  Some people did it in a little over two hours, and some took almost seven hours.  The only thing that mattered was that they were out there and they finished.  The “real” race would take place the next day, but for most of us at the Jerdon Mountain Challenge it was the most important event of the weekend.

Probably.
Posted by TheMutt at 8:23 AM