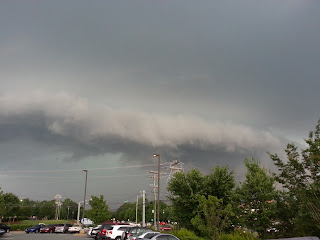 It puts me in a foul mood.

I was really glad to see my cousin while she was here.  She's from the side of my family that I used to be very close to, but we haven't talked much over the last few years.  I miss them, so hopefully soon I'll get a chance to see the rest of them.  I wasn't about to run off for a ride while she was here visiting, so when she took off back to VA Sunday morning I had to find a place to ride in a hurry.

Luckily, I got out to Backyard Trail early enough to beat the rain.  The sky looked shitty, but the trail was reported to be in great shape.  While I changed my clothes and got the bike ready, a group of riders hit the trail just before I did.  Since I was kinda grumpy from not riding, I wanted to make sure I didn’t go too fast and catch up with them.  I needed some alone time, especially after being out in public on Saturday without any kind of two-wheeled machine.

I hit the trail at a nice, steady pace, and the plan was to shake myself out of my bad mood.  Within minutes, I was smiling and enjoying the peace and quiet of being alone in the woods on my bike.  My addiction is riding bikes, and without my fix I had started to suffer from withdrawals.  I guess there are worse habits to have.

After about two miles though, I found the group stopped on the side of the trail to rest.  I politely said hello and kept going.  The next stop on the trail was the Poo Tracks, and I knew that would improve my mood even more.  I hit them at a quick pace without any issues, which is much different than the social ride last Tuesday when I fell in the poo-laden soil.  I think I forgot to mention that last week, but whatever. 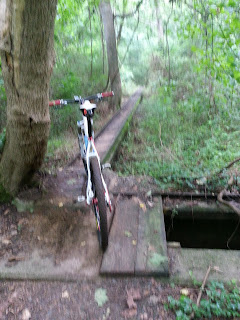 Blurry photos.  I has them.

I had so much fun on that section that I took the shortcut and did it all over again.  The group had resumed their ride though, and all I could hear was their loud conversations over my otherwise quiet ride.  I picked up the pace a lot to lose them, and before long I was back to riding all by my lonesome.  And again it was quiet… 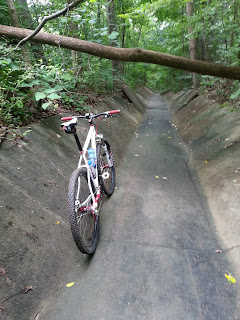 My bike was making funny noises, which I later found out was just the whole shifty bits and drivetrain combination.  I really need to hurry up and get back on a single speed before I go batshit crazy.  While I was examining my bike local SSer Eric Hagerty rolled up and we talked for a minute.  We discussed my frustration of being on gears, and then he quickly rolled away on his one-geared machine.  I felt a bit of jealousy for that particular moment in time.

Even though my legs were a little tired from not using them to pedal all week I had a great ride.  I was drenched in sweat from the humidity, and I was satisfied that I got off my ass early in the morning to beat the rain.

Even my new and improved TK-421 trooper was happy that he didn’t have to sit around the house anymore. 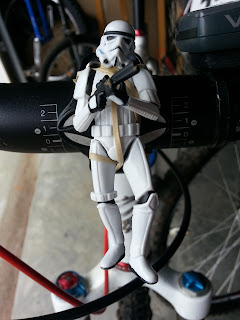 It’s not looking good for the rest of the week.  There may be a ride tonight, but right now it's looking like it might be on the pavement.  Yuck.

Last night I got out to do some trail work though at our "secret" local spot.  Maybe I’ll get into that tomorrow if the ride report is kinda sucky.