Although I was happy with the bike I had (other than the creaking), I’m really pretty excited about my latest build.  With a new Niner One9 frame in my possession, I grabbed a few beers and went to work.  It didn’t take long (approximately two beers) and I’d assembled my newest toy. 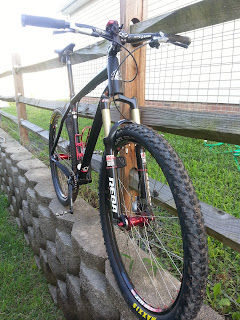 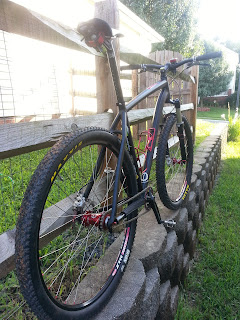 What’s with the squishy fork, you ask?  Well, since my only current rigid fork is white, I thought it would look ridiculous on there.  And let’s face it:  looks are all that matter.

Okay really, it is all that matters, but I’m working on that.  The rigid fork will be painted to match (because I’m too cheap to buy a new one) and it will be back on there shortly.  For now, I guess I’ll just go all soft on y’all.

Now, we move on to the name.  The old One9 was called The Falcon (as in Millennium Falcon from my favorite movie), and I just didn’t feel right recycling that moniker on a totally different bike.  So, after standing around staring at my new build I came up with something else.

This is my apprentice, Darth Maul.

Shitty movie I know, but Darth Maul was still pretty badass.  Well, until he got chopped in half.  They should’ve chopped Jar Jar Binks in half instead.  Bastards.

Anyway, I think he fits nicely with my new bike. 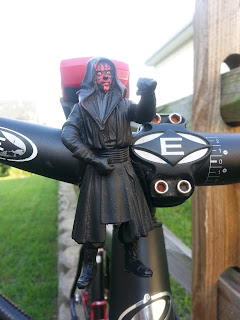 Now there’s no turning back from the Dark Side.

And so I won’t be a complete Star Wars nerd on y’all, here’s the first sticker I put on the new ride. 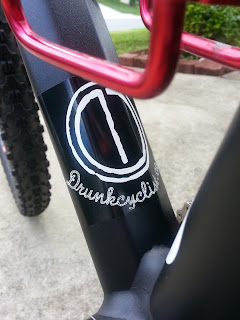 Of course I’m still a Drunk Cyclist.  You know me , right?

I freaking love this bike so far, even though I didn’t really plan on getting a new one.  The maiden voyage was last night after work at BYT and it sliced through the trail like a double-edged lightsaber.

Big thanks to Niner for a painless warranty process and even bigger thanks to The Cycle Path for taking care of me during the whole thing. 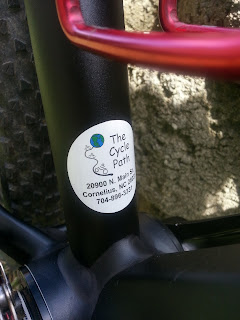 Yes, I have a new single speed, but I didn’t stop there.