Pieces Of The Puzzle

This past Saturday I had the opportunity to attend a bike parts swap meet. A couple of local guys decided to hold a huge bicycling yard sale in front of one our local shops, The Cycle Path. People from all over the area showed up to set up tables, truck beds, and even picnic blankets full of bike parts they no longer needed. I didn’t really think much about going at first, since I figured it would either be a bunch of crap, or a bunch of expensive crap. I’ve acquired most of the parts I need for the 29er build I’m working on, but I am still in need of a fork and a big wheelset. After scouring the Internets for forks, I was starting to think that I would never get one at a reasonable price. I decided to take my chances and head up there anyway. 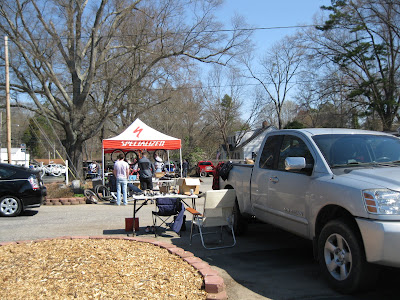 When I arrived on the scene, I was pleasantly surprised. There was a shitload of people in the parking lot, both buyers and sellers. The prices seemed pretty reasonable, probably since most people just wanted to get rid of stuff they no longer needed. While this would translate into deal for me, most of the stuff was 26-inch wheel specific. Meh. I know, I still ride a 26 inch-wheeled bike, but I was in search of 29er parts. Maybe this whole 29er thing isn’t a fad after all.


After my initial pass-through, I headed into the shop to talk to the HMFIC of The Cycle Path, Mark. After briefly shooting the beeze with him, I suddenly started running into people I actually knew. I made my way around the sale tables again, talking to everyone I knew and also paying a little more attention to the items for sale. I found a nearly complete 29er bike for sale at one stop, and I noticed it had a nice squishy fork on it.

“Sure thing, what do you need?” asked the kind shopkeeper.


I asked about the fork, and he proceeded to remove it form the bike. I looked it over and found it to be in satisfactory condition, so I made the deal. He held it for me for a few minutes while I ran to the ATM for some cash money. I handed over the dough and I had a nice squishy front end for my 29er project, er build. 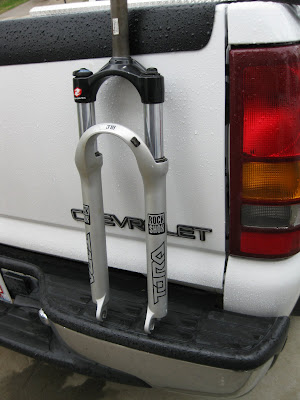 I know, it’s not too fancy, but it will work. Since I thought I would never find a reasonably priced fork, I thought I would end up ordering a RockShox Dart 3 for my new build. Yuck. I’m glad I was patient, because this fork is much better. It’s the Tora Air, so it’s a lot lighter than the fork on Lunchbox’s bike. I said goodbye to my cycling swap meet friends and hurried home.


After installing the Cane Creek 110 headset, I installed the fork and spacers. I put on a temporary stem to hold it place, and I was more than happy. While I’m not in a giant hurry to finish this bike, I am still pretty excited to see some progress. It sure beats having the frame and a bunch of random parts lying on the shop floor. I took some photos of my soon to be new ride: 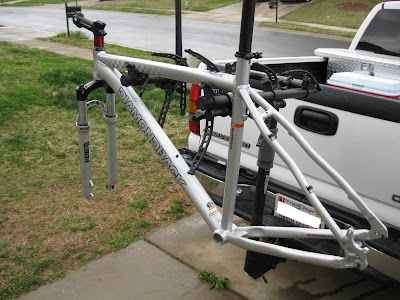 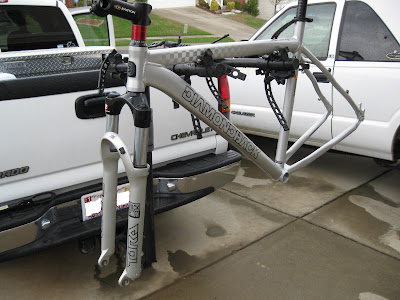 I still have a long way to go, but at least this is a start. The only things I need now are some tires and wheels, and some brand spankin’ new shifter cables. I have some parts set aside, but there is still a little bit of a hold up on the building process. A few of the parts I need (bars, stem, and seat) are still on the Greatest Short Track Bike on Earth, which is currently out on loan. It seems that The Chili Man liked riding it so much that he’s going to borrow it for a while. Cool.


Since The Chili Man is itchin’ to ride, I also decided to spend a little time on Sunday gathering up stuff to build a better bike for him. Initially I was going to take his bike and make it better, but that turned out to be a bad idea. There wasn’t a whole lot I could do for his bike, since it didn’t really have any quality parts to speak of. Sure, I could have added a few things, but it really wouldn’t have made a difference in the long run. Quality parts on a not-so quality bike just wouldn’t work. Just because you pour syrup on shit doesn’t make it pancakes. I had quite a few bike parts that were gathering dust, so I started building his “new” bike. 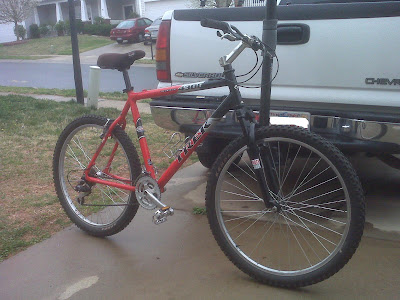 This should be a pretty nice bike for him, and hopefully he will enjoy riding it. It’s not the best, but it’s the best I could do with spare parts. I still have a few minor things left to do before it hits the trail, but that shouldn’t take much time or effort. Maybe I will have it completed just in time for the next schedule Kids Ride. I probably should hurry up though, because The Chili Man informed me that I am being rewarded for my efforts with some of his culinary delights. Hell, I’ll build him a bike every week for that kind of reward.
Posted by TheMutt at 6:38 AM