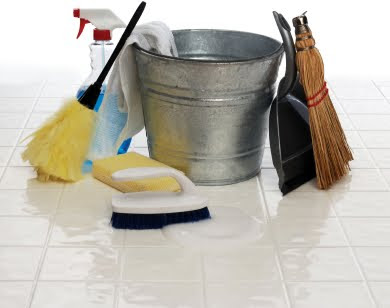 If you read the title of today’s post, you would probably assume that I didn’t make it to the Kerr Scott Trail System this past weekend. Well, you would be correct. After checking the weather report several times a day up until Saturday, the forecast was less than promising. Sure, I knew the weather here wasn’t great, but I was hoping that the rain would miss that area (or at least they would only get a small amount). That turned out not to be the case. I didn’t think that it would be a very good idea to make the trip from Charlotte to Wilkesboro and take a chance on riding in shitty conditions. I’m not sure if the trails actually “close” up there, but I didn’t want to make the hour and a half drive to find out. With my out of town off-road adventure pland thwarted, I chose to head out to the B-43 shop to do a little cleaning.


First, I decided to do something I had been putting off for a long time. Let me elaborate. You see, I’ve been riding motorcycles since I was pretty young. Friends, family, and even strangers would let me ride their two-wheeled machines, and I developed a love for a motor on two wheels. When Lunchbox was still in diapers, I bought myself one of those fancy crotch-rockets, and I rode the shit out of it. Many years later when I met Little Miss Sunshine, I found that she too liked to ride a steel horse on the open road.


We rode together a lot at first, but my love of pedaling eventually took over again. I became less interested in the hassle of motorcycle maintenance, and more concerned with hitting the trails on a less-complicated steed. So, a little less than a year ago I decided to sell my beloved Yamaha FZ-750. Although I never regretted it, I did miss it from time to time. Little Miss Sunshine also lost the love for riding motorcycles, and her trusty steed remained parked in the garage for nearly three years. Sure, I road it from time, but there was no use in keeping something that we really didn’t use.


With that, we decided that it was time to sell it. At first I resisted, thinking that I would ride it every once in a while (enough to justify keeping it I thought.) I tuned it up about six months ago, and took it for a spin around the block. After that, it sat around, unused again. We decided that enough was enough, and that it should be put up for sale. I brought it out of the garage on Saturday morning, and I took it for one last ride. I headed out on a nice windy country road, and I have to say that I really did enjoy it. However, this time it wasn’t enough to make me want to keep it. I would rather pedal one of my many bikes than let a machine do all the work for me. So with that, I parked it in the driveway and decided that I would no longer be a motorcycle rider.


I grabbed some cleaning supplies and got to work. I wanted to get it nice and shiny so I coulod take some photos. There would be no turning back this time. Every time I thought about how much fun it was to ride a motorcycle, I quickly realized that the love was finally gone. No more leather jackets, helmets, or twisting the throttle on an old country road. My two-wheeled adventures would be on a human-powered bike from now on. After I got it all cleaned up, I snapped a few photos: 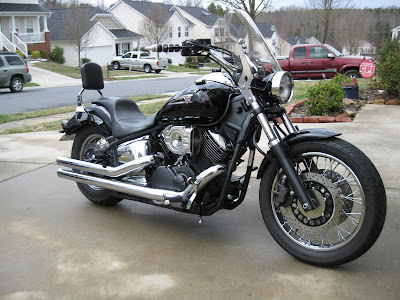 Yes my friends, it will be put up for sale now. I’ll probably stick it on Craigslist for now and see what kind of interest we get. It is a 2005 Yamaha V-Star Custom, with only 5,561 miles. Yes, that is the real mileage. Most of those miles were accumulated in Florida, with only about 200 put on it here in North Carolina. Am I offering it up to you, my dear readers? Well, yeah, if you want it. That wasn’t really the reason for the blog post today though. I was just sharing my thoughts like I always do, but if you want to buy this beast, you can just shoot me an e-mail. It’s going up on Craigslist later today.


What else did I do this weekend? Well, I guess I’ll save that for tomorrow. I can tell you everything on the first day of the week. What the hell would I write about otherwise? See y’all tomorrow.
Posted by TheMutt at 9:14 AM