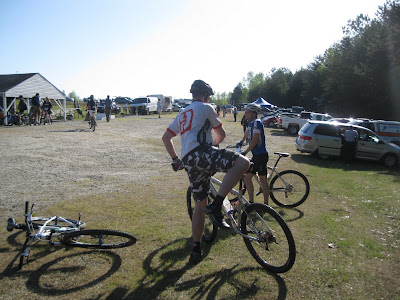 Sunday was race number five in the Southern Classic Series, the Stump Jump. I left the house at the crack of dark, and picked up the Dirty Party Cycle along the way. We didn’t get there as early as I would have liked, but I still had enough time to pick up my packet and warm up.


I had no idea what to expect when I got there. There was some shitty weather the day before, but everyone said that the trails were in fine shape. I didn’t bother to pre ride the course either, since I wanted the race to be my first time out there. Someone said that there was a whole lot of downhill at the beginning before you get to the singletrack, so the plan was to gun it from the start and hope for the best. As I lined up at the start, the DPC headed out on the trail to find a good spot for picture taking.


There were sixteen of us in my class, and I only recognized a few faces from other events. When we were given the signal, I took off like a fat girl after a plate of ribs. I worked my way up to second place, and my heart rate was already redlining from the sprint. I backed off a bit and down shifted, but my gears weren’t responding. As I fumbled with my shifting, a few guys went by. Actually, a lot of guys went by. There was a short climb, and then it was a long, fast downhill through a power line cut. I momentarily forgot about my gears and flew down the trail.


As we entered the singletrack, the group was still pretty tight. I had made up for some lost ground on the downhill, and now the trail was pretty flat. I somehow got into a gear that was good for cruising, and hauled ass through the woods. It was fast and flowy, with a lot of switchbacks. Luckily, my bike handling skills were working okay, so I was able to hang with the group.


I passed a few people, and a few people passed me. There was a lot of fighting for position in the first few miles, especially since the climbs were few and far between. Suddenly a bigger, rocky climb appeared, and I saw a lot of people off of their bikes, walking. The guy in front of me attempted to climb, so I followed him. He was in too high of a gear though, and bailed. I ran into his wheel and had to hop off and walk. I gained one spot though when I hopped back on my bike. The trail turned back into the relatively flat stuff again for a bit.


About halfway in, there was another one of those rock climbs. People were having trouble with this one too, and the DPC was able to photograph it since that’s where he decided to camp out. 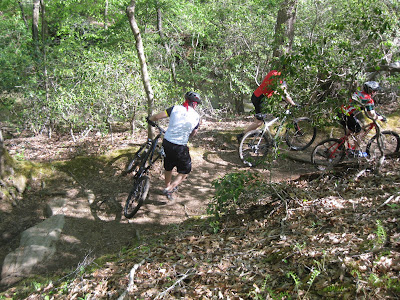 While he waited for me to come by, he took a picture of his bike for some reason. 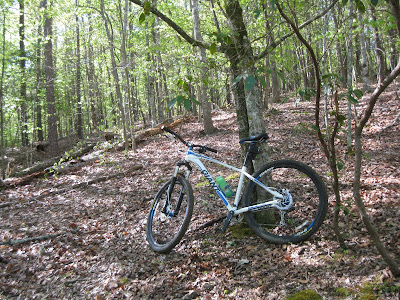 Soon, I came up to the climb. I saw him at the top, and I acknowledged him. He yelled words of encouragement as I muscled up the short, yet steep climb. 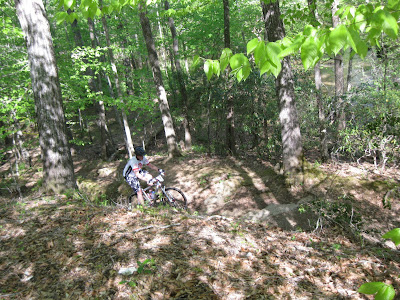 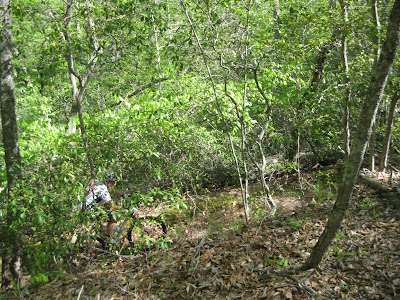 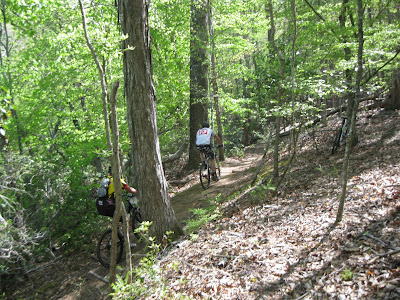 The guy behind me (in the last photo) wasn’t in my class, but he pretty much stayed on my wheel until the end of the race. I offered to let him by, but he seemed to be happy having me pull his ass around for the remainder of the race. Also (as I forgot to mention earlier) I was being chased down by local Charlotte rider Rodney B., but I somehow managed to fight him off…for a little while at least.


I was in the home stretch. The trail was back to the flat stuff, with some long, fun downhill action sprinkled in. I was having a blast, a “racing” a lot faster than I normally would. Since I though the course was only 7.5 miles, I started picking up the pace just before mile seven. This turned out to be a mistake, because when I hit mile seven someone shouted out, “Good job, only one mile to go.” I turned it on too early, and I was starting to suffer a little bit on the climb out.


Rodney had caught back up to me at that point, so when we exited the trail, him and the guy right behind me went around and put the hammer down. We made a sharp right turn onto a gravel road headed towards the finish, and Rodney slid out and nearly took out a barricade. Making contact with that probably saved him from falling down, and it did absolutely nothing to help me catch him. I managed to shift into a higher gear on the gravel road in hot pursuit, but he was still getting away from me. The guy in front of us turned into the field (not part of the race course we later found out), and we followed.


A race volunteer pointed us in the right direction, and we had to make another sharp right turn to get back on track. Rodney and the guy that wasn’t in our class lost some speed in the turn, but I swung out wide and slingshotted ahead of them. I gunned it to the finish line, ahead of both of them.


The race was a lot tougher than I though it would be, especially since the course was so flat. It was fun. I would definitely go down there again to ride. A lot of the trail reminded me of Florida trails, and I felt right at home. Where did I finish? 11th place. It wasn’t my greatest performance, but I had fun so that’s all that matters. It also gave me some points towards the overall standings. If I keep this up, I should do well when the series is over. Maybe I’ll discuss that some more tomorrow, or not. We had a pretty full day down there in Spartanburg, so I’ll probably talk about that tomorrow.
Posted by TheMutt at 9:42 AM

thats what i get for not preriding the course, ever...i blindly followed that guy...dumb, dumb, dumb...

We both followed him. I guess it could have been marked a little better though.