No More Race Report (For Now)

Now that I took three days to recap a six hour race, I’m done. It seemed like there was a lot to talk about, so spreading it out over a few days was the right thing to do. If it was too much for you, then you better hope that I don’t do any races longer than that in the future.


Speaking of the future, I’m racing again on Sunday. This time it’s another one in the Southern Classic Series. The Race To The River takes place in the Harbison State Forest down in Columbia, South Carolina. Just like most of the races in this series so far, I’ve never ridden down there. I hear it’s pretty flat too. I don’t know if that’s good or bad, but I‘m racing it regardless. It should be a lot of fun.


It’s not all about me this weekend though. My pal and neighbor, The Chili Man, is competing in his first duathlon. That’s right, his new found love for cycling has him attending the University City Duathlon right here in Charlotte. Lunchbox and I will be there to cheer him on, and also to heckle him if the mood strikes us. I’m excited to see him get out there and put his training to the test.

Last, but certainly not least, is an even that kicks off this weekend. 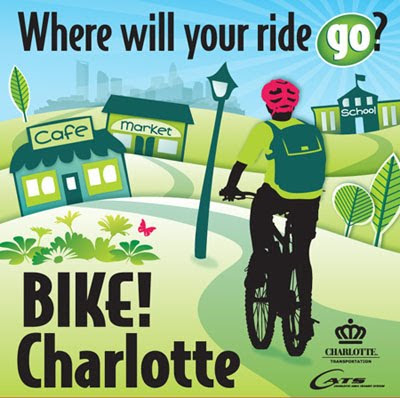 Yup, it’s time again for BIKE! Charlotte. Join our local mountain bike club, the Tarheel Trailblazers as we ride with the Mayor to show our support for cycling in Charlotte.


This event is for all types of cyclists, but since we are a mountain bike club we’re doing something different. We’ll be meeting at a local shop, Queen City Bicycles to ride to the meeting spot for the Mayor’s ride. We’ll be on mountain bikes for this 1.4 mile ride, so hopefully we’ll make a big impact when we roll up on the scene on our fat tires. We’ll be meeting at the shop at 7:00 a.m., so come on out and join us if you’re a local.


Since I’ll be busy tomorrow morning, this is it for blog posts for the week. Little Miss Sunshine is heading out for a weekend filled with mountain biking when she joins her women’s only club, the Dirt Divas for their spring trip. I’ll have to keep myself busy while she’s gone. Come back next week for another race report, the Mayor’s ride details, my weekend bachelor shenanigans, and maybe even something about the Chili Man’s duathlon adventure.
Posted by TheMutt at 8:08 AM

I did the course last year, it is flat and doubletrack. Make sure you get in a faster pack and hang and use the big ring. From what I remember you only do the technical section 1 time which is sort of like Renni for a few miles, then back to wide open spaces.
wv. corsh