It’s now the “offseason.”  That means that I’m no longer racing, which may also mean that my posts could get worse (or better.)  I usually like to make little equipment changes when I’m done racing, but after recently building a new bike I didn’t think I needed to do that just yet.

Except when I realized some new stuff showed up that I mentioned, but hadn't used yet. 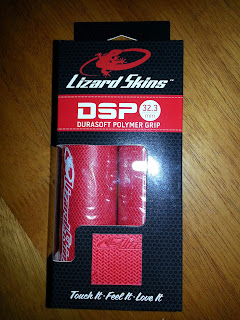 I finally got around to installing/testing these out, so I figured that I would cover it really quick.  I’ve been using Lizard Skins lock-on grips for so long now that I wondered if I could stand anything else.  I briefly tested out some grips on my rigid SS bike from another brand (thanks to a recommendation from a friend), but that little experiment went over like a fart in church.  It stunk, but there’s no need to bash them here.  It’s all personal preference, you know.

Anyway, these DSP grips are super light (30g compared to the 130g I had before), but since they aren’t lock-ons I wondered if they could be installed in such a way that would keep them from slipping under normal riding conditions.  Would it be like the old days of using hairspray to install grips just to have them slip on the first ride?

Well, no.  These were a little different.  The good kind of different too.  Not like your cousin that shits on himself and acts like no one else can smell it.

The tiny little package came with grips, bar plugs, and two pieces of double-sided tape.  There is an installation video on their site, and after watching it for all of about thirty seconds I was ready to go (I got the crash course already at Interbike.)

Step one, clean the handlebars with alcohol.  Not beer or whiskey, that’s for drinking, dumbass.  Once the bars are clean and dry, apply the double-sided tape. 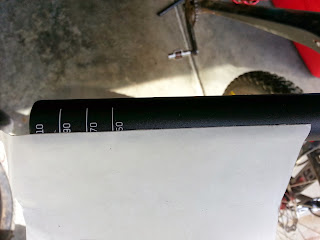 Leave a bout 7mm hanging over the edge of the bar (yes, I measured), peel the paper off the other side, and tuck the remainder onside the bar end. 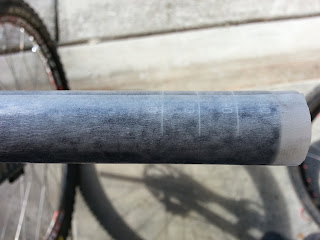 Not tucked in yet, I know.

Step two, spray glass cleaner inside the grip and all over the tape.  Push the grip on the bar, slowly twisting it until it goes into position. 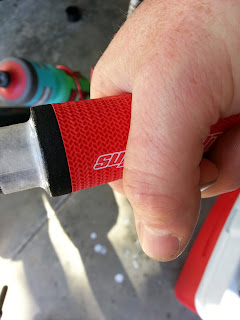 Step three, let that shit dry completely and go ride.  I let it dry for a couple of hours before I tested it out.  Your results may vary. 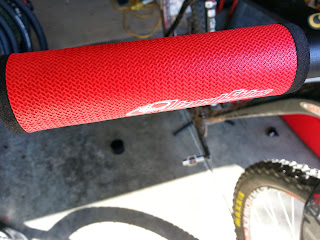 While I may have saved a few grams and all that, it’s not important.  What’s important is that these have wayyyyyy more grip than anything I’ve used in the past.  They feel solid under my hands, and even without gloves I feel like my hands are secure on the bars.  They come in two sizes, so even if you have smaller hands they have something that will fit you.  Initial testing tells me that Lizard Skins has hit a home run with these, so expect to see me talk about these a little more in the future.  You can probably also expect me to get another pair for my Enduro™ Bike

Maybe.  Let's not get crazy here.

A whole post about new grips?  Well yeah.  They are kinda important.  Try riding without them and let me know how that works out.
Posted by TheMutt at 8:40 AM