Back in the Saddle… Soon

I took a nice long break this week even though I’ll probably pay for it later (or sooner, who knows.) Instead of my usual road rides after work, I’ve basically been a slug. No mid-day swimming or running either, just to add to the laziness. I haven’t been happy about it, although I did need the rest. However, every time I venture into the garage, I hear a muffled call from Goose, or the yet to be named road bike. Even the unicycles seem to be beckoning me. I’ve tried to stay out of the garage as much as possible these last few days because of that. I did spend a bit of time the other night installing a new crankset on Lunchbox’s bike, Clark. I swear that Goose tried to jump out and grab me when I took Clark out of the rack. Maybe I’ve just been drinking too much beer this week.

We’ve had a little bit of rain around here the past two days, so no trail riding anyway. The road bike is ready to ride, but I won’t get on it tonight. We’re back to our family “movie nights”, now that the big screen TV has been repaired. I actually forgot to mention it last week, because I was knee-deep in racing and whatnot. So yes, we’ll camp out in the living room this evening, pig out on pizza, and watch some movie that wasn’t worth seeing in the theater (most aren’t these days.) I’m looking forward to it, and it’s a great way to cap off a week of laziness.

Tomorrow morning we’re rising at the crack of dark again, but this time it is not bicycling-related. Little Miss Sunshine is participating in the Start! Charlotte Heart Walk in Uptown Charlotte. After all she has done for me in the summer races, Lunchbox and I will join her in a fight against heart attacks and stroke (ooohhh, that sounds tough.) The walk is only three miles, and I will have to fight my urge to run it. I find it very ironic that Little Miss Sunshine is participating in the fight against heart disease, since she makes her living working on heart attack victims and such. If she fights too hard, she could work herself out of a job. That’s probably not likely though, because there will always be parents who raise their kids like this. Mmmmmm, I'm lovin' it.

Speaking of medical issues, I’m a little concerned. I noticed a bald spot on my head about a week or so ago, and not where normal hair loss occurs. While I was getting a haircut last night, I was hoping that my freshly shorn scalp would conceal the hair anomaly, allowing everything to grow in evenly. I thought maybe the new furless patch was from a mishap during my previous haircut. I showed the spot to Little Miss Sunshine, and she didn’t seem too worried.

Me: “It was there before my haircut.”

LMS: “Well, it’s probably from your helmet or something. You’ve been riding a lot lately.”

LMS: Laughs and walks away…

So, there you have it. Another consequence of too much riding rears its ugly head. I still think it’s a tumor though. Little Miss Sunshine will probably laugh again when she reads this. I, however, will launch a full-scale investigation into my new ailment. I will report my findings on an upcoming installment of this blog. Meanwhile, see for yourself. 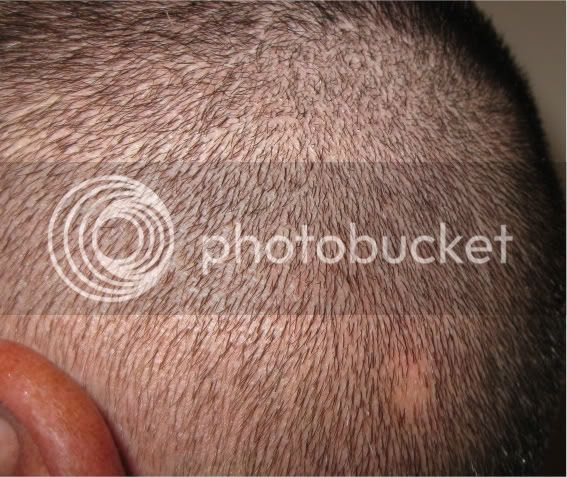 “It has to be a bicycle-related tumor. I’m convinced of it.”

It's not a tumor; it's a sign. You're one of the chosen ones of that mystery creature (It looks kinda like ET!) that those kids found in Panama.