The Gods Must Be Crazy

"What the hell is this? I ordered a Pepsi!"

No, I didn’t get hit on the head with a Coke bottle, but it sure felt like it. Although I had a week long break from any form of exercise, I shifted back into high gear starting Monday. I went back to my “regular” training schedule, including swimming and running. On M-W-F, I’m swimming at the Mecklenburg County Aquatic Center during my lunch break. On Tuesday and Thursday, I run from the same location. After work, the plan is to ride the road machine for some quality training miles. The swimming has gone, well, swimmingly. I’m easing back into it, and it hasn’t been difficult to pick up where I left off. The running was a bit of a challenge. My legs are still sore from Tuesday’s run, and I’m scheduled to hit the streets for another few miles today. I can work through that kind of soreness though, since it’s just a little lactic acid buildup.

The road bike seemed to be going well too. I took a 10 mile ride to ease back into things on Monday, and it went well. If it wasn’t for lack of time, I could have done twice that distance pretty easily. Yesterday was a whole different animal. I had planned on upping the distance, and hammering away during the ride. I started out at a nice pace of about 18 miles per hour, then stepped it up to 23-24 miles per hour when I got about two miles into it. I felt great, the roads were smooth, and I didn’t have too many problems with traffic. However, at about 9 miles into the ride, I heard the now familiar “ping” sound from my rear wheel. I knew exactly what it was this time, since I’ve heard it before. This time I was confused, because I hadn’t hit any potholes or anything. I was just riding along and it happened. 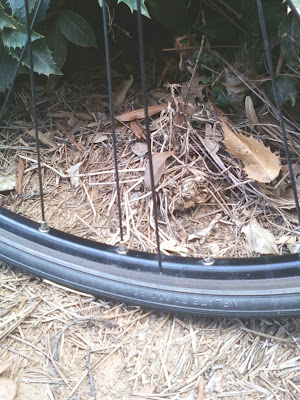 I pulled over to the side of the road to inspect the damage. Another broken spoke. Damn it. I tucked it into its neighboring spokes, released the rear brake, and continued on my way. Just like last time, the wheel was warped pretty badly, so I rode cautiously. I took the climbs really slowly, and I was kind of scared going fast down the hills. I was afraid of complete wheel failure, which would cause me to crash. I didn’t need that. As I approached a really long and steep climb, I decided to get off and walk. I thought it would be too stressful on my wounded wheel if I pressed on through the climb. When I arrived at the top, my phone started ringing. It was Little Miss Sunshine, so I answered it.

Me: "I broke another damn spoke."

And just like that, help was on the way. I figured I had about four miles to get home, so I told her where I thought I could meet her. I took off a little faster than before, and I made it another two miles. I stopped in our predetermined extraction point and waited. She showed up with Lunchbox in tow. I said, “Ha. Looks like you’re riding in the SAG wagon again!” We arrived at the house, and I cooked up a huge pot of linguine to make me feel better.

In reference to the title of this post, I am starting to think that the cycling gods are against my newfound interest in road riding. I’ve had more mechanical incidents is the few months I’ve been road riding than I’ve had in years of mountain biking. The problem is, Little Miss Sunshine won‘t always be there to rescue me. I didn’t call her when I first had my mechanical problem, because I knew she was working late. Well, that and I’m stubborn. Maybe I’m just cursed.

Now I have to figure out why I keep breaking spokes. I had the last broken spoke replaced and they also straightened the wheel. I figured that I wouldn’t have any more issues, since I took it to a bike shop. I’m certain they inspected the rest of the spokes for durability, so I would be aware of any future risks. I plan to drop off the wheel at the same shop this afternoon for another fix. Maybe they can tell me why I keep breaking spokes. I won’t mention the name of the shop here, because it’s not my usual shop. I’m only patronizing them for repairs because they are pretty close to my house, so it’s convenient. They are a good bicycle shop, but I don’t really have a relationship with them. I actually hate taking anything to a shop, but I have no choice. I do most of my bicycle mechanic work myself, but I don’t do wheels. I guess I need to learn, especially if this is going to be a recurring issue. On a positive note, the yet-to-be-named road bike may actually acquire a new moniker from this madness. Hmmmm.