Is It Safe To Come Out Now?

Wow. This weekend was chock full of adventure. When we last left off, the Charlotte Mountain Bike Series was coming to a close, and I was so close to a top ten finish. I don’t want to start there though. Let’s have a small weekend recap, shall we?

Saturday morning, Lunchbox and I woke up again at the crack of dark (a recurring theme on the weekends lately.) We loaded up my road bike and headed for Kannapolis, NC for a charity bike ride. It was time for the Tour de Tots. We got there at around 7:30 a.m. so I could register, and also so Lunchbox could find Neal Boyd, cycling event promoter extraordinaire. Not only does he run our summer races, but he also organizes all kinds of events in our area, which ultimately gets people riding bicycles. That’s why we are always glad to help out, even when we participate in his events. Lunchbox was set to ride in the SAG (support and gear) vehicle to assist riders who couldn’t continue, got lost, etc. This was going to be my first group road ride, so I was hoping that I didn’t need SAG support. It was nice to be a part of a great event like this. 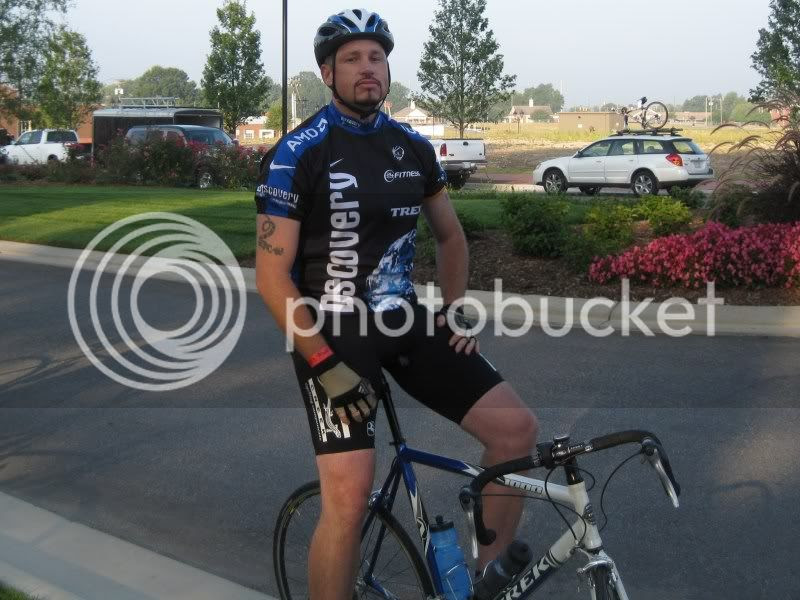 "I’m not a roadie. I’m making a mean face just to prove it."

We started the ride pretty slowly, with a police escort through downtown Kannapolis. I envisioned a fast paced ride, with a huge group like you would see in the Tour de France, even though this wasn’t a race. Some of these roadie guys looked really serious, and I figured this would be a good way to see how much I can do on the road. Since I had a race the next day, the plan was to take it easy. I was happy and enthusiastic at the start. 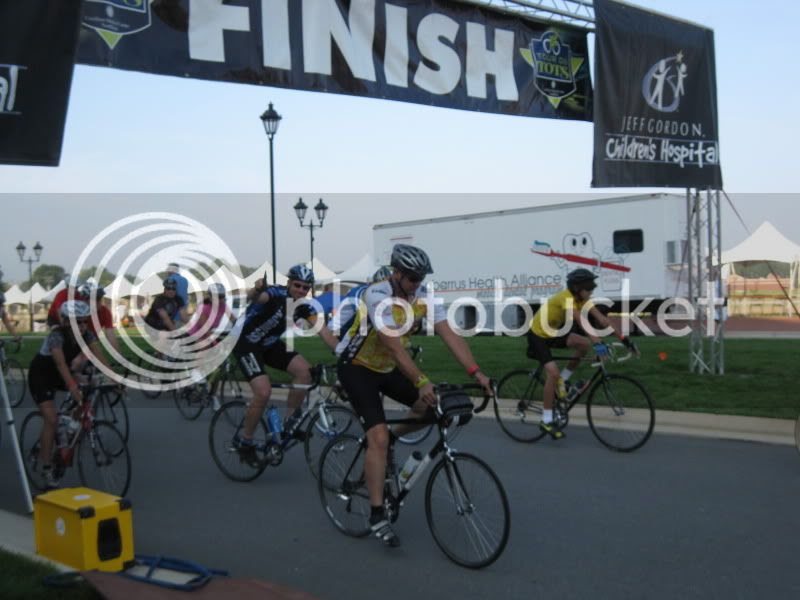 "One more picture, that's it!"

After the escort though town, we turned on a country road, and we were on our own. I immediately felt like the group was going too slow, so I started moving up towards the front. I would draft a little, then attack on the climbs. So much for saving my legs for the big finale on Sunday I guess. I was having fun, and I didn’t care. The few guys in the lead group broke away, and I wasn’t about to push that hard. I stayed with the second group, and we averaged about 18 miles per hour. The first rest stop came up, and the whole group pulled in for a pit stop. Suddenly, I was left alone. I wasn't about to stop. Why should I? I wasn’t tired, and I knew it would be worse if I stopped and started again. I pedaled on, looking to catch someone in front of me. I actually enjoyed my alone time, and the scenery was beautiful. 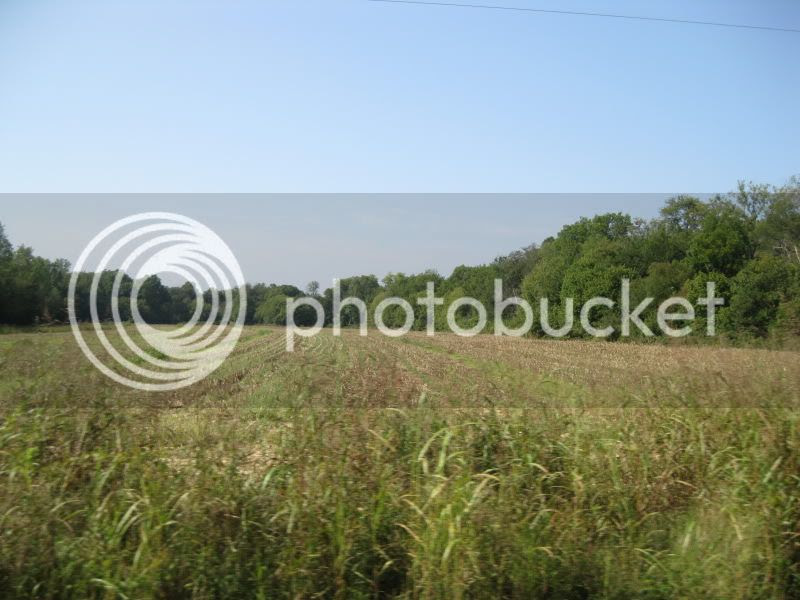 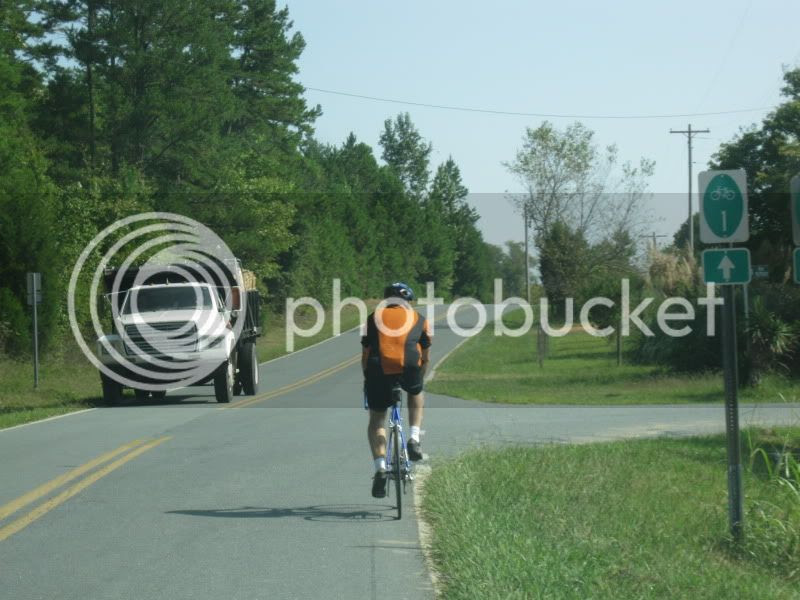 "The SAG wagon is comin' to getcha!"

I eventually saw someone up ahead of me, but I never really caught him. I kept up a good pace, at least as best I could. About three miles from the finish, I hit a pothole and I heard a loud metal pinging sound, but I looked and didn’t see anything unusual. I found out later that I had broken a spoke on my rear wheel, and that caused it to warp a little. I wondered why the last few miles felt so difficult. I finished the ride anyway, and I ended up with around 35 miles. After the ride, we had lunch and helped with tearing down the equipment. Good times. 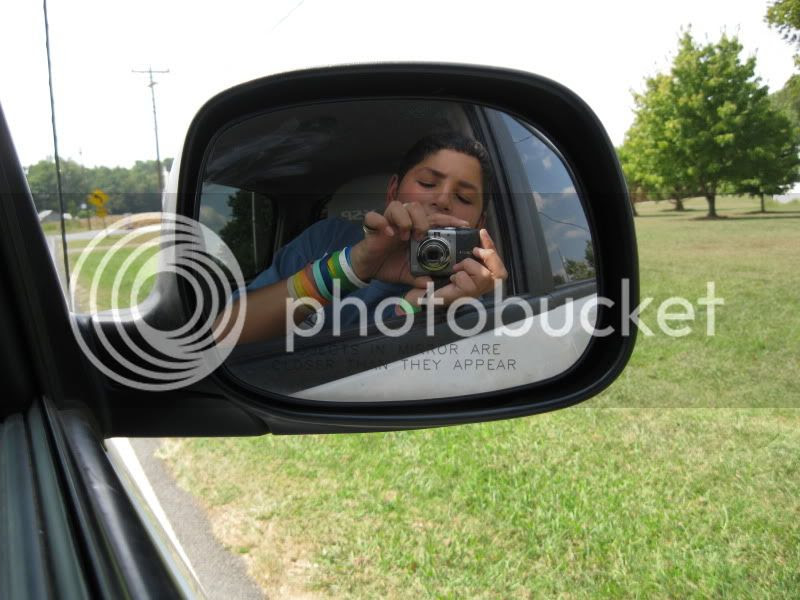 "I take the pictures around here!"

After taking it easy the rest of Saturday, we again woke up early for some cycling-related activities. This time, Little Miss Sunshine joined Lunchbox and I for the grand finale of the Charlotte Mountain Bike Series at Fisher Farm Park in Davidson, NC. We arrived after a 40-minute drive, and unpacked our worldly possessions for the day. Little Miss Sunshine headed over to help with registration while Lunchbox and I got some warm-up action on the trail. All of the regulars were there, so I needed another strong showing to remain in the top ten. Coming into this race, I was tied for 8th place. I knew I could easily lose that if I wasn’t careful, so I had to leave it all on the trail. We lined up at the start and powered up the dreaded hill.

I managed to get ahead of Doug and Patrick, but I couldn’t get past Nicholas, who was sharing 8th place overall with me. We really kept a fast pace through the trail, and I felt pretty good. My legs were sore at first, but they quickly loosened up after a little climbing. I could see the pack right behind me every time I turned, so I picked up my speed whenever I could. I passed a few riders in my group, as well as some others who weren’t. As I came around the start/finish line, I could see that Patrick was real close. 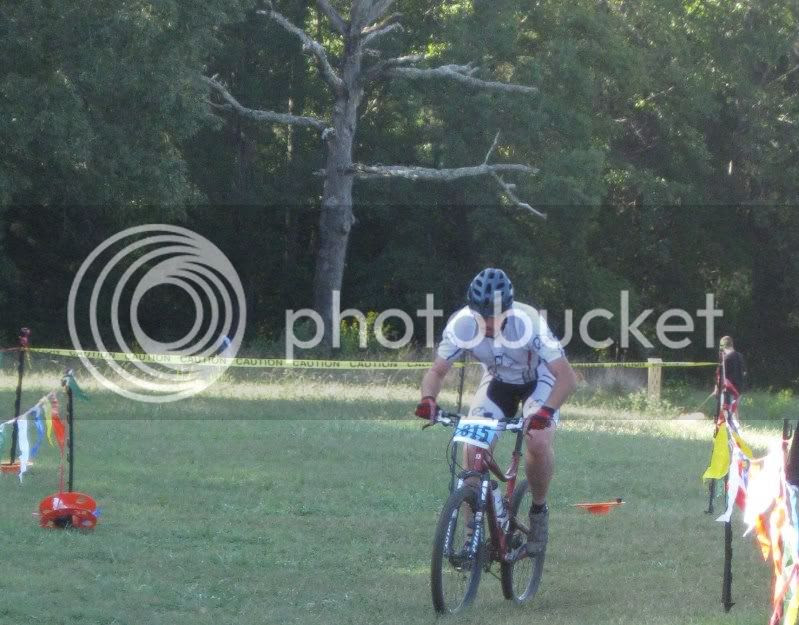 I wasn’t really worried about Patrick, because his 7th place overall was untouchable to me, unless he quit and I finished in first place. I still kept up the pace to catch up to the few people in front of us. I didn’t see Doug, and I was worried. He had the ability to knock me off my top ten high horse, and all it would take is to place ahead of me in this race. I caught up to another guy in my class, and passed him on the fire road. He was on a single speed, and my gears definitely helped in that instance. Patrick was still on my wheel, so I told him to lead. I didn’t need to beat him, so I let him pull me around the last half-mile or so. We made a deal: I wouldn’t try to take him in the final few feet, and he would help me keep anyone else from passing us. It worked out great, except that no one was really close enough in the end to get by us. I crossed the finish line in 7th place, with my front wheel about three inches behind his. Nicholas came in ahead of both of us, so now I had to see where my final place would be in the overall hunt.

Meanwhile, Lunchbox was racing too. He was pretty confident this time, even though he got a little sick during the pre race meeting. Everyone was asking him how he felt, since they all saw him throw up in the trashcan. I guess he was a little embarrassed, but he didn’t show it. At the start of his race, he once again took it to the others on the hill. He had a nice race, finishing in 4th place. I think he ended up 9th place overall, which was great. Maybe next year he won’t spend the whole summer in Florida, and he can spend a little more time racing. I think he is confident now, and he will do better next year. I am very proud of him.

As for me, I stood by nervously as the results were tallied. As Neal announced the places and told everyone to pick their prizes, I started to get nervous. In my category, I ended up with a 10th place overall, out of over 100 racers. Talk about meeting my goal, huh? I wish I could have done better, but I am happy with the results. It is way better than last year anyway, and there is plenty of room for improvement. We packed up the race stuff, and headed back home.

Now it was party time. We decided to have a birthday party for Lunchbox, in addition to our family meal. He wanted a skate party, so I reserved Soul Ride Skatepark for the evening. We had a ton of kids show up, and I even got out there to skate. Lunchbox had fun skateboarding and hanging out with his friends. 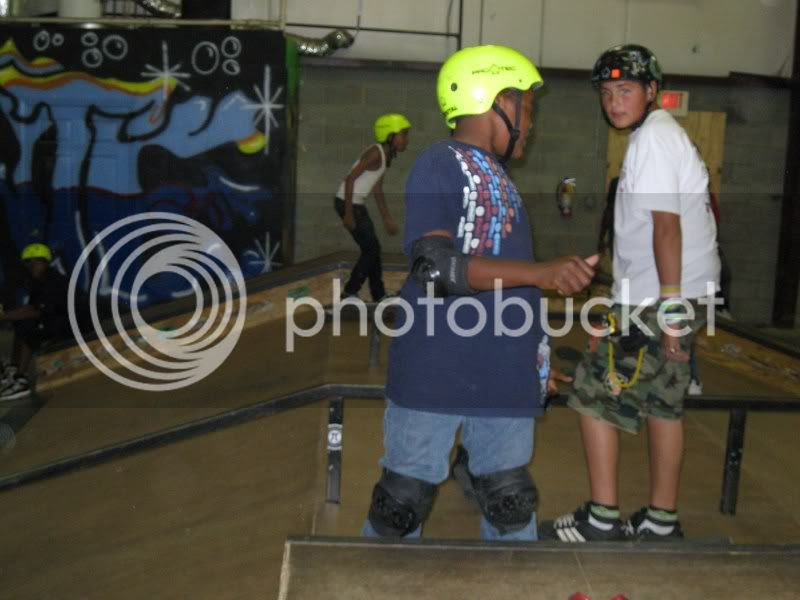 Another special treat was the birthday cake. Little Miss Sunshine made a kitty litter cake for the kids. They loved it! Some of them were afraid to try it at first, but they all enjoyed it. It may look disgusting, but it is some of the best kitty litter, er cake you will ever have. Yummy! 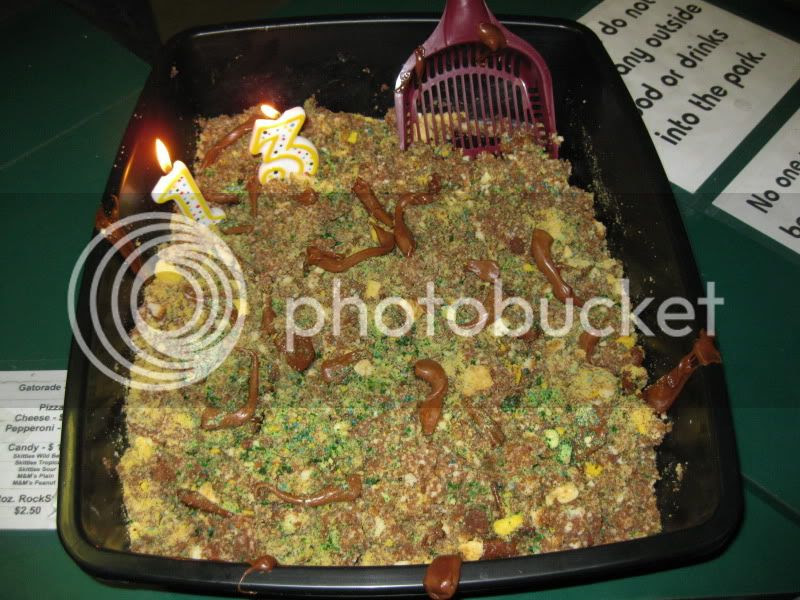