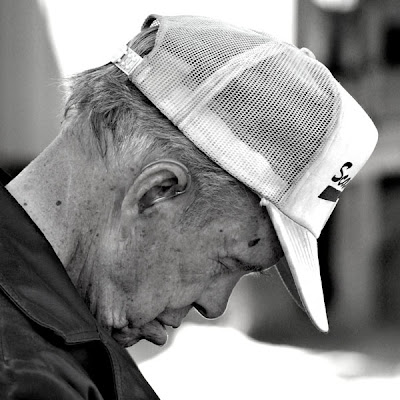 This weekend was rough. Even thought I had a lot of “saddle time”, it pretty much wore me out. I know, I should be happy that I got to ride all weekend, but I gotta slow down once in a while. All of the training I’ve been doing for the XTERRA Whitewater has been hard, so I’m hoping it will pay off next month. So, what did I do this weekend? 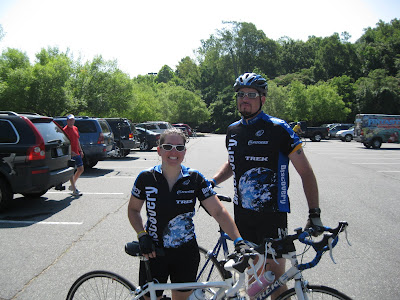 Yeah, Little Miss Sunshine and I had a little roadie fun on Saturday. We participated in the Collier Lilly Ride 4 Life, which I told you about last Friday. We opted for the 30 mile route, just so we could still have a little fun without killing ourselves. The Dirty Party Cycle showed up too, but he rode the 50 miler. We saw him at the beginning of the ride, but that was it. 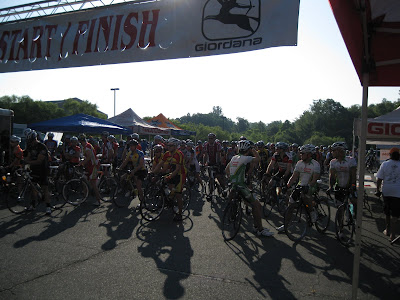 The ride started off at Davidson College, and headed out through some beautiful country roads. The route was very nice, ad there were only a few tough climbs. The downhills were super fun, and I reached speeds of almost 43 miles per hour. That shit was fun, but there’s no way I could be a full time roadie. Those guys are way too serious for my taste.


After successfully completing the ride, we had a nice lunch provided by Fuel Pizza in Davidson. Lunchbox was on hand for the event as well, but he doesn’t ride a road bike. He assumed his usual volunteer duties and seemed to enjoy helping out the event organizers. In all, it was a good day. Well, until later that evening, that is.


Just before I was about to hit the sack Saturday night, I heard a strange noise outside. I looked around the corner of the house and heard our air conditioner making a high-pitched squeal. It sounded like some wounded animal, so I had to investigate. The motor had seized up, and it was super hot. I immediately shut off the breaker and headed inside to warn the family that we might be in for a sweat-fest.

The next morning, we all woke up sticking to the sheets, drenched in sweat. Now, as a former Floridian, I shouldn’t have a problem with the heat. In this case though, our house doesn’t have enough windows, so it was like living in an oven.


The next morning we called to get the A/C serviced, and they made a trip to the house. I had left by the time they showed up, but Little Miss Sunshine later informed me they the didn’t have the proper part on hand to fix it, and that we would have to wait another day or so. Oh joy.


Where was I? Well, since I had some spare time, I decided to go play in the hot sun (rather than stay in the hot house) at Sherman Branch. The plan was to do two laps at a good pace. I hit the trail at a pretty good clip, but my ride was interrupted by a member of the reptile world. A medium-sized black snake was sprawled out across the trail, directly in my path. I moved him off the trail to continue my ride, but he seemed a little upset that I bothered him. He coiled up like he was gonna strike at me, but I reminded him that I was just holding him, and he couldn’t bite me. Nevertheless, he was trying to shake his tail as if he had a rattle, and gave me his best mean face. I snapped a photo and I was on my way. 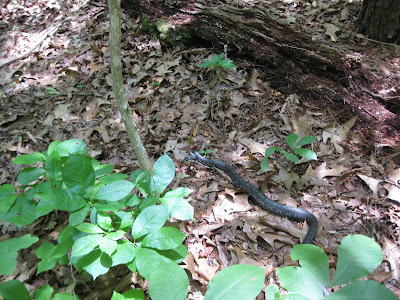 After that first lap (with a minor stop for snake-wrangling) I felt great. I headed out for lap two at a little quicker pace. My legs felt surprisingly good after riding so much the day before, so anticipated finishing my lap in good time. Again (almost in the same spot as last time), I came across yet another snake. This time though, I didn’t have to work so hard to remove him off the trail. He pretty much got out of my way unassisted, and I thanked him for it. Yes, I talk to animals. Don’t you?


During my second lap, I saw a friend of mine repairing a flat tire on the side of the trail. After a little conversation, he was back on his bike and I rode out the rest of the lap with him. I headed back to the truck to get some water and to put my bike away, satisfied that I had met my goal of two laps. Suddenly, my XTERRA mentor and friend Peter showed up. He invited me to join him and his pal for a lap, and I obliged. A third lap couldn’t hurt that bad, could it?


We hit the trail at a fast pace, but I acted like it didn’t bother me. After all, Peter is 67 years old, so he couldn’t wear me out on the trail…could he? We continued this fast pace throughout the ride, and they both seemed impressed that I was out for lap number three. I told them that it was mere stupidity that I was out there for so much mileage. We didn’t stop for anything this time (no snakes surprisingly), and I headed back to the truck. I was pretty happy that I pushed myself so hard this weekend, especially since I have a good week of racing ahead of me. I’ll fill you in more on that tomorrow I guess.


I’m just plain worn out though. After spending so much time in the sun on the bike, I had to go home and sit in the sweatbox that is currently our house. Hopefully the A/C guy will have everything back up and running, or else this is gonna be a long week. I’m no so much worried about me or the other human inhabitants of our domicile but I am a little concerned about the pets. They are all covered in fur, and it appears as if they are having a rough time. So yeah, I feel bad about that, especially since they rely on us to take care of them. At least I can go swim in the nice cold pool today though. The dogs and cats aren’t so lucky.
Posted by TheMutt at 8:51 AM