Until My Legs Fall Off

XTERRA Whitewater is fast approaching. Nineteen days to be exact. Mr. Shepherd mentioned da udda day that there hasn’t been much of the usual pre-race chatter about this event, and I agreed. Sure, we’re all plenty excited, but we haven’t really said much about it to each other. Well, we’ve been circulating e-mails amongst each other, but there hasn’t really been much of the smack–talking, nerve-calming chit chat that we’ve all grown accustomed to in the past few years. I chalked it up to either nerves, or the fact that we are all veterans of the XTERRA (albeit not at this particular venue.) Maybe some of it is that we haven’t been discussing our “training plans.” Well, my friends, that changes today.


Sure, I have some kind of plan, although it’s not really set in stone. I swim three days a week, usually covering half a mile (in under twenty minutes) each time. I’ve been running quite a bit too, even on weekends with Little Miss Sunshine. The bike is obviously what I do the most, and I’ve actually been getting plenty of two-wheel fun time lately. In fact, I’ve been doing so much shit lately that I feel like my body is wearing out. Yesterday evening was no exception.


Right after work, I headed over to the U.S. National Whitewater Center for some XTERRA recon action. The plan was to ride the entire course, and report my findings back to the rest of the B-43 triathlon team. Also, Little Miss Sunshine was planning on riding it with a friend of hers, but I didn’t think we would cross paths. I was on a training mission, and she was there for uh, fun.


I arrived there a little before 6 p.m., and got ready to hit the trail. It was around 95 degrees, so I made sure that my water bottle was loaded up with a popular sports drink. While I was spinning around the parking lot to warm up, I noticed that Little Miss Sunshine’s truck was there, sans bicycle. That meant that she had a head start on me. I knew I would be riding a faster pace, but I still didn’t thin I would catch her since I was planning on hitting every loop there. I headed over to the start area of the XTERRA, and surveyed the last portion of the swim leg: the man-made river. 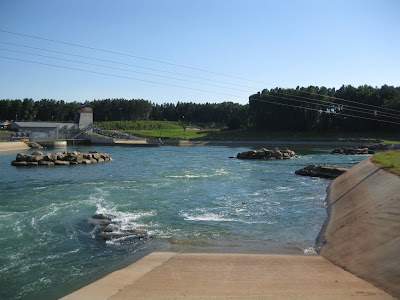 This is the point where I would exit the water, and head over to the transition area. I put away my camera and hit the trail at full speed. I wasn’t racing per se, but I wanted to ride at a pretty fast pace. I started out pretty strong, confident that I warmed up properly. On the first loop (just as I thought I was making good time), I hear a ruckus in the bushes. When I looked down, I noticed that something was missing from The Big O: 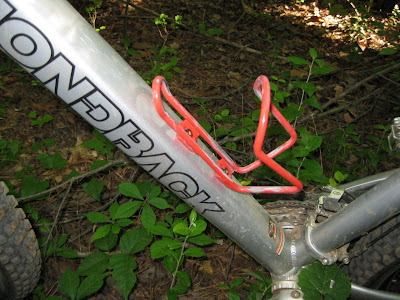 I was pretty sure that I brought a water bottle along for the ride, and now it was missing. Since I was pretty certain that the noise I heard was my bottle trying to escape, I walked back down the trail in search of it. About twenty feet back or so, I found it. 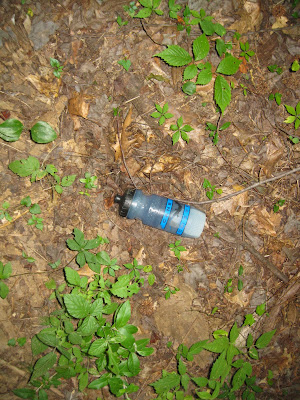 After giving my bottle a brief lecture on littering, I was back on the trail. I picked up my pace again, hoping to make up for the few precious seconds I lost chasing my fugitive drink container. Just as I started to get into a rhythm, I saw a couple guys from the Tarheel Trailblazers on the side of the trail, tools in hand. I offered my assistance with some trailwork, but they said they had it under control. I insisted, but I was told to go ride. I hit the trail again full speed, hoping that this was my last delay.


Up ahead on the Figure 8 loop, I saw two female riders. It was Little Miss unshine and her friends. I applauded LMS for tackling the first black diamond section, and I offered to ride along with them in case teed some trail guidance. It would slow me down a bit, but I would still get in a good workout, especially if I only used one gear (single speed pretending I guess.)


We rode along, and I basically shot ahead at full speed whenever I could. I waited for them on some of the tougher sections, and anywhere else where the trail split off. Since I was so far ahead at one point, I managed to take a photo pf those two crazy girls, just as they were mashing up a hill. 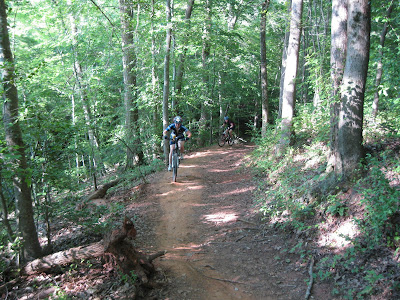 The rest of the ride went well, although I didn’t take any more pictures. I had planned on taking photos of the XTERRA Whitewater swim area, and some other random spots on the trail. It was still fun though, and I was really proud of Little Miss Sunshine for tackling the tough trails at the Whitewater Center. She hadn’t been there in almost three years to ride it, and she did amazing. She did have one mishap on the Toilet Bowl loop, but she got back up and finished the ride. The best part of that little crash would be the lovely war wounds she obtained: 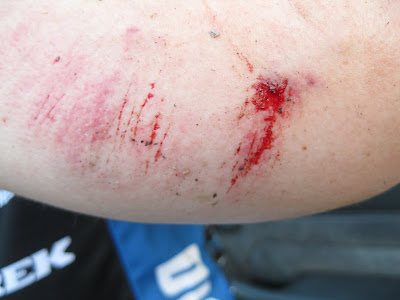 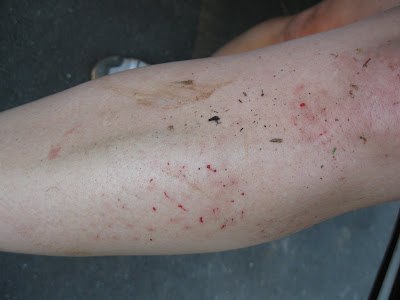 It was a fun time, and the temperature had cooled off quite a bit while we were out there. We grabbed some food and a cold beer at the on site restaurant, and that capped off a lovely day. The XTERRA Whitewater course is gonna be a tough one, but I’m not too worried. Maybe the Dirty Party Cycle and I will get back out there before the race for a pre-ride. Oh yeah, Mr. Shepherd, the Gas Line climb just plain sucks. Well, unless you REALLY like climbing. See you in nineteen days.
Posted by TheMutt at 8:48 AM