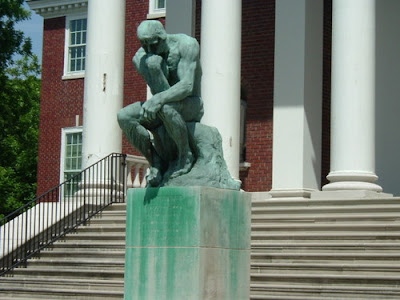 Since I mentioned yesterday that my racing plate was getting pretty full, I started doing a little thinking (yes, I do that from time to time.) Although I really enjoy doing the Summer Series races, I don’t really have to do them all. There are only sixteen races in the series, and I usually strive to do them all. This year I’m not as competitive since I moved up a class, but I still enjoy the learning experience and the workout. That being said, it wouldn’t kill me to miss a few here and there.


I arrived too late to the last race at the U.S. National Whitewater Center (not my fault of course), and I was okay with just being a spectator and helping out. I realized that day that I can miss one every so often and it wouldn’t matter. Last week’s race was different, since I arrived with plenty of time to race. The weather had different plans though, so I missed that one too (I’ll get a chance to make it up though.)


What does all of this mean? Well, I’ve all but talked myself out of racing in tonight’s race at Renaissance. It’s not that I don’t enjoy that particular venue, but I guess I could do without the stress of getting there on time. Also, Little Miss Sunshine is going out of town for a week (bright and early the next morning), so it would probably be better if we didn’t hang out there on the other side of town all night.


No worries though, since I’ll still get a ride in. Little Miss Sunshine graciously offered up my riding time to the MadSS and his Mrs. for the evening, since they were already planning on riding on my side of town anyway. So, as of now, it looks like I’ll be getting pulled around the ever-so-lovely Poplar Tent for some fun on our local mountain bike playground. When I spoke to the MadSS last night, he wasn’t really feeling the race anyway, and has been itching to ride Poplar Tent. Should be a hoot.


If you come back here tomorrow and don’t see a ride report or any other kind of nonsense, please don’t be alarmed. It is highly unlikely that I will post up anything at all (here’s your cue, Mr. Shepherd.) I have to take Little Miss Sunshine to the airport bright and early, and then I’m off on some sort of business trip myself. I’ll be heading down into South Carolina for the day, and I’ll probably be too busy actually working. That means I won’t have time to get on here and post my usual garbage. If you’re somewhat of a new reader to this fine blog, then do yourself a favor and peruse the archives to catch up on all the shit you’ve missed. If you’re one of my regulars, then check out some of my “friends” over on the left side of the page. Buy some stuff from some fine companies, or just check out some other bloggerriffic people that I follow. That should be enough to entertain you for a while. See y’all Friday.


P.S. In keeping with the theme of exploiting the coincidence number around here, I thought I would share this post I saw on Twitter regarding my upcoming race at the Shootout On Anglers Ridge:

SVMBA - We just had our first PRO registration for The Shootout!!! 43 total entries so far. NICE ...

Email ThisBlogThis!Share to TwitterShare to FacebookShare to Pinterest
Labels: 43, not racing, Poplar Tent