Last night was supposed to be somewhat of a “normal” night. Since I’ll all finished with my vacations, it was time to get back to the local race scene. We found ourselves at Colonel Francis Beatty Park for another race in the Summer Series. I’ve skipped a few here and there due to various reasons, and it looked like I would be skipping another.


Since Lunchbox just returned from a lengthy Florida vacation, he was ready to get back into the race scene. Just before he left though, we took some laps at a local trail, and he was pleased with his pace. I basically led him around the trail and had him stick to my wheel, which greatly increased his lap time. Since this would be his first race since that day (almost two months ago), I asked if he was interested in trying that in a real race. He agreed, which meant that I would have to sacrifice my own race to do so. I was happy to help him out.


After a doing a little warm up action on some of the trail, he was ready. I told him that I would keep a good pace, and that he had a chance to place a little higher than usual if he kept up. You see, Lunchbox isn’t your typical racer boi, but he does like to get out there and see how hard he can push it. In fact, some of the kids in his class are faster than most adults I know, so it’s not like he’ll win one in the near future. He’s fine with that though. We headed up to the start line and I had him pose for the obligatory pre-race photo: 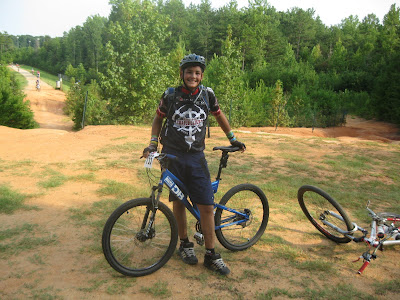 The plan was for me to find a spot at the beginning of the trail and wait. When he came by, I would hop in front of him and keep the pace. We scouted the area in question and agreed upon a spot, so he wouldn’t have to look very hard to find me. His class was one of the last to leave, so I had plenty of time to cheer on my fellow riders while I waited: 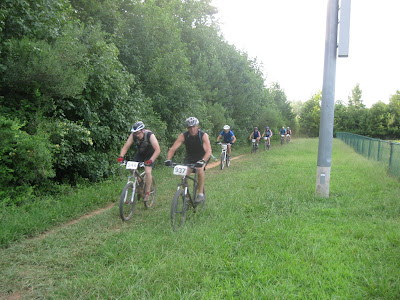 Anyway, I saw his group coming up the hill, and I got ready. To my surprise, he was still right with the main group. In fact, I had to pedal pretty quick to grab a spot in front of him. When I jumped in, I asked how he felt. “Good,” he replied. I told him that we would keep the lead riders in sight, and not to worry about the riders behind him, unless they try to make a move of course.


We hit the singletrack, which started a series of long climbs. He said this part always wears him out, so we maintained a steady pace, with the lead group still in sight. I reminded him of that too, and it seemed to keep him going. We kept up that pace for a while, but eventually I could hear him breathing heavy. We slowed a bit to recover, and I told him not to worry. The riders behind us weren’t even close.


We pretty much did the same thing the entire race. Speed up when he felt good, and slow down when he needed to recover. It seemed to work, although I could tell that I was pushing him harder than he was used to going. In fact, he had to stop one time near the end, to uh, unload some liquid weight. He was a trooper though, because he hopped back on the pedals and kept going. With the leaders out of sight by now, all he was racing for was to keep the kids behind him from catching up. When we got to the last section, I asked if he was ready to turn it up. He said, “Yep.” That’s just what we did.


We put the hammer down, and he was right on my wheel. Some guys from another class were attempting to make a pass, but I told him not to pull over to let them by. They seemed a little pissed about it, but I didn’t care. I told them that if they wanted to pass, that they would have to earn it. Lunchbox was going pretty fast, and the finish line was only a few hundred feet away. When we crossed it, he was happy. I was pretty proud too, because he didn’t give up. Even after stopping for a mid-race throw-up session, he still managed a 6th place finish. He gave it his all, and survived.


This guy did not survive: 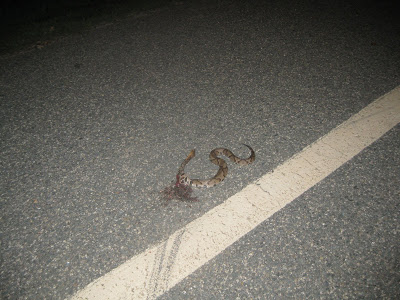 Normally this would be the end of my story, but I have to explain the extra bike I brought home. No, I didn’t steal it. I have way too many bikes at home to want to take one from someone else. I actually acquired it from a fellow rider that had a little trouble last night. Here is the mystery bike that was in the back of my truck: 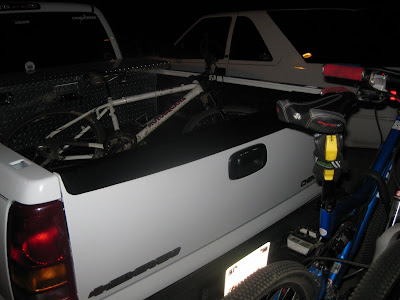 You see, after the race, Lunchbox and I always stick around to help tear down the race stuff, and last night was no different. That’s actually the best part to me when I go to the races. I like to help out. Anyway, when we were all packed up and about to leave, a little kid came over and said his dad needed help. From what we could gather from the kid, the guy was overheated from his race. We ran over there with some water, and found the guy lying down on the side of the road by his truck.


He was cramping pretty bad, and throwing up. He told us he was pretty dizzy too. We sat him up, and gave him some water and electrolytes. He slowly started to feel better, but we were worried about him trying to get home. He lived was down in South Carolina, so we called his wife and told her that she should get up here to help him get home.


In the meantime, he really wasn’t getting much better. We all decided that a trip to the Emergency Room for some professional medical care was in order. Since there was a hospital really close by, we drove him over there. We checked him in the ER, and told his wife where he would be. We managed to get his truck over to the ER parking lot too, but his bike was in the back of it, unsecured. We all decided that it would be better if one of us took it, and held on to it until we saw him again. That’s how I ended up with his bike.


Since we left him in good hands, one could assume that he would be okay. I’m sure he was severely dehydrated, and hopefully they gave him some fluids via IV. I haven’t heard anything, but I’m sure we’ll see him again soon. He was a regular at the local races, and hopefully he can get back on his bike soon. It was a really late night for all of us, but I was more than happy to help. It was crazy hot out there last night, so that could have happened to any of us. I just hope he’s okay.

I’m starting to think that since my racing has been kind of sucky lately, maybe I would be better using my Bike Patroller training for these events. I get way more satisfaction helping others than I do racing anyway. No, I’m not giving up on racing, but maybe I should tone it down a bit. See y’all tomorrow.
Posted by TheMutt at 8:55 AM