First things first. Today is a special day for my son Isaiah, a.k.a. Lunchbox. He’s been with me here on Earth for 14 years now, so we’re getting ready to celebrate. I know, 14 years isn’t a long time, but they have been the best years of my life so far. He’s a great kid, and it’s a privilege to be his dad. Also, I can’t forget to mention all the work he does as the official B-43 photographer. When he’s armed with the camera, he makes sure to capture the action during all of our adventures. Tonight, in his honor, we’ll be heading out to dinner at one of those fancy Japanese flamin’ grill places. 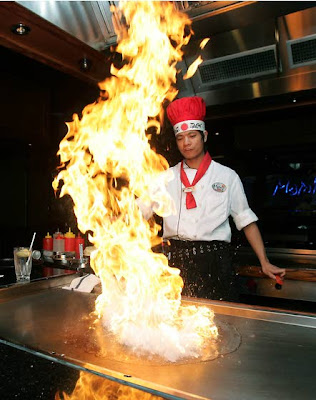 Now, we’ll go back to the River’s Edge Mountain Bike Marathon. After the race started, I figured I would change my clothes and eventually see if I could get out on the trail for a bit. My knee was feeling a little better, so I hoped that I could meander around the course and offer my assistance to any downed/injured riders.


Before I got a chance to walk over to my truck, an injured rider came in. She had fallen on the Figure 8 loop, and dislocated her shoulder. When Little Miss Sunshine and I started helping her, a woman standing next to us asked if there were any medics on the scene. We said, “Yeah, us.” The lady responded by saying that she was a physician. Proper etiquette is to always yield to someone with higher training than you, so we let her take over. A woman who was with her said that she was a CMA (Certified Medical Assistant maybe?), and she tried to step in and help too. As a former EMT and current heart specialist, Little Miss Sunshine found this lady’s lack of knowledge a little disturbing. The whole scene was kind of odd actually, especially since the “doctor” seemed to have quite a bit of trouble getting the shoulder back in place. All we could do was stand by and try to help: 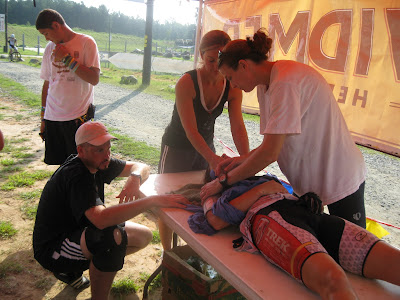 I really wanted to take over, but it wasn’t my place to tell a doctor how to treat a patient. I suffered this exact same injury a year and a half ago, and I had less trouble putting my own shoulder back in place. I knew I could help, but my hands were tied. I mentioned to Little Miss Sunshine that maybe our dear “doctor” was probably a dentist or something. She was part of a coed duo, and she said that her partner would take over when he came in. She seemed more interested in getting out on the course for her lap than anything else (or having someone relieve her from her struggle.) Just then, another rider came in with the same injury (or close anyway.) Little Miss Sunshine tended to him, and did an excellent job. Eventually, both riders will be okay, but their race was over. I decided to hurry up and get out on the trail in case anything else happened out there.


Before I left though, I saw a couple of my racing pals at the start/finish line. Here’s a photo of Rod, the other half of the coed duo that I mentioned yesterday: 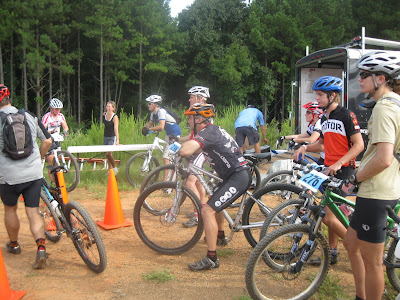 Just as I turned around, the Space Cowboy came in from his first lap. I barely got a photo of him, since he was hauling ass and feeling mighty fine: 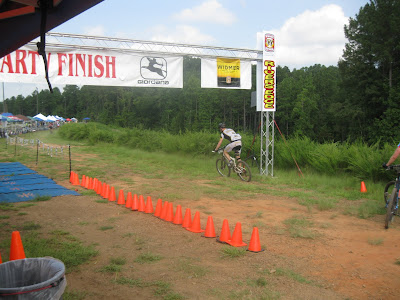 Here’s Mrs. MadSS coming in from her first lap: 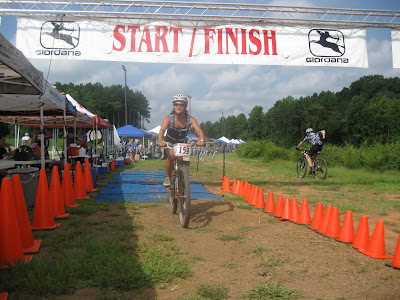 I eventually got out on the course, and I stopped quite a bit. My knee was still hurting, so I camped out every so often to rest it, and to get some photos. Here’s my pal Chad toughing it out on his third lap: 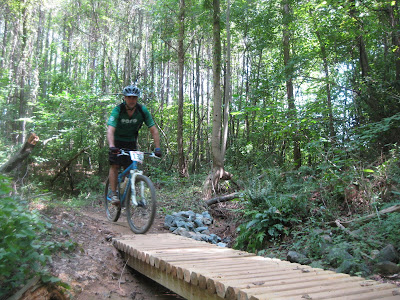 A little while later (in a different location), The MadSS came through on what I think was his last lap. He was almost going too fast for my camera: 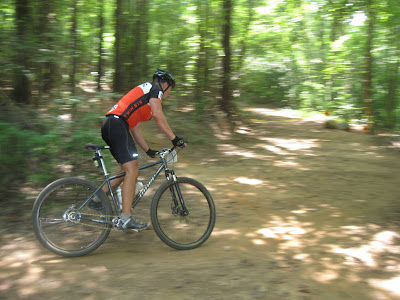 While I was out on the trail, I got word that yet another rider went down with a shoulder injury. I raced over to the Green Loop as fast as my knee would allow, completing the 3 mile section in record time. There were a couple of us looking for the downed rider, but we never found him. I guess he managed to get out under his own power. Left without a patient to treat, I headed back to the finish line just in time to catch a few of my friends coming through on their final lap.


Here's the Space Cowboy coming through at a high rate of speed, giving it his best: 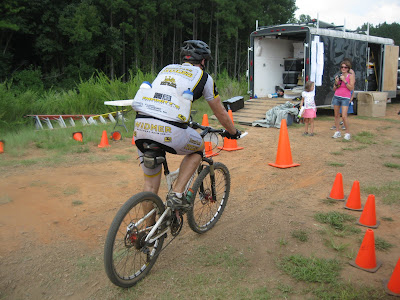 When it was all over, some folks managed to grab some free beer before it ran out. The MadSS and his Mrs. were recovering by the man-made river with some frosty brew: 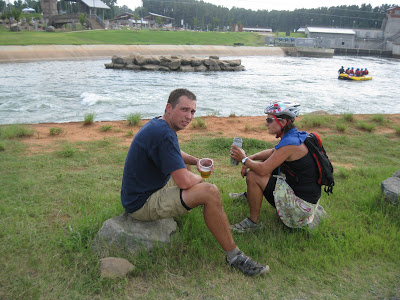 It looked like a fun, yet challenging race. I was bummed that I couldn’t race, but it was good to be out there helping the other racers. I’m proud of all my cycling friends that entered the race. They gave it their all and impressed the shit outta me. Maybe next year I’ll be able to join them for some torture. Until then, I’ll be working on getting my knee (and my bike) back into tip-top shape while I prepare for the next grueling adventure…the Tree Shaker. Oh fun.
Posted by TheMutt at 8:13 AM