These Are The Breaks

Today should have been a race report from the Southern Classic Series race at Dark Mountain yesterday, but unfortunately it’s not. Why, you ask? Well, it all started on Friday evening after work, when I decided to grab The Big O and go for a quick ride at one of our local trails, Sherman Branch. It was supposed to be a nice, fun lap, and I was hoping to complete it in record time.


I arrived at the trail and saw a few of my local racing pals, and they were just about to get on the trail. I told them that I would try to catch up, and that became my goal. These guys are normally faster than me, so it would be a challenge. When I finished getting ready, I hit the trail at full speed. I felt pretty good, so I figured I would at least see them at some point. After about 3 miles, I spotted them a little ways ahead of me. That meant that they were either a) going really slow, or b) I was on pace to set a new personal course record. I like to think it was the latter, so I sped up some more. Just as I did, I heard a snap, and my seat moved back a bit. Shit, I thought, I must have broken my seat.

I kept going for a minute, but when I looked down to see what was going on, I noticed that I had experienced another unfortunate event. I had broken yet another frame. I quickly hopped off of my bike and walked out. When I got back to my truck, I had a chance to fully inspect the damage: 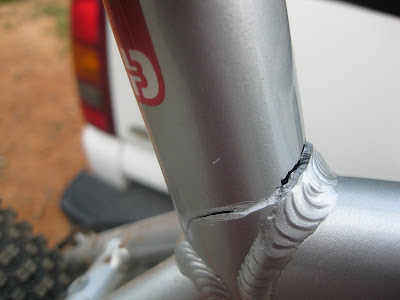 Two broken frames. I guess being a Clydesdale isn’t what it’s cracked up to be (get it, cracked up?) I didn’t get a chance to sulk about it though, since I had to go to work (I was on call, remember?) It would have to wait until the next day.
When I got up the next day, I realized that I would be okay. Since I just had my Diamondback Sortie 3 replaced via warranty (thanks to the fine folks at Diamondback and Ride-A-Bike Bicycle Shoppe), I knew I would have a bike to ride. Fortunately though, I had an ace in the hole. I had a backup frame for The Big O, which was the exact same Diamondback Overdrive. I immediately began swapping out the parts to the new frame. 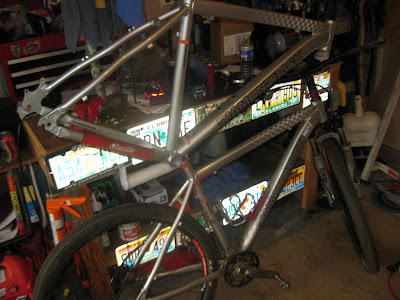 It didn’t take that long, and it was actually pretty easy. Since the frame was the same, I didn’t have to make any adjustments when I put everything back on. I took it for a quick test ride, and it was good to go. I could still race the next morning if I wanted to. Relief, for sure.


To pass the time for the rest of the day (in between working here and there), I decided to build a nice little skateboard ramp for Lunchbox and his crew. During one of my trips to work during the day, I had acquired some wood from a local home improvement store (where I ran into Dicky and The Boy for some reason) went home, and got to work. In my haste, I neglected to take pictures of the finished product. I did take some pictures of the building process though: 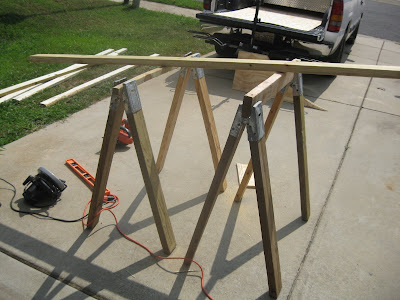 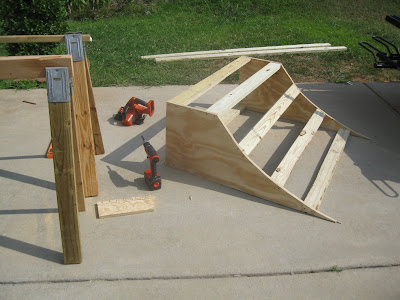 Saturday was a full day, and it wore me out. The boys enjoyed the ramp, and I even got into the action a little bit (when I had time.) I was happy to be ready for the race the next morning, though, thanks to some quick parts changin'. After getting called to work again at 6:30 on Sunday morning though, I went back to sleep and didn’t wake up until 11:00 or so. Shit. The ironic thing is that the work people left me alone for pretty much the entire duration of the race (including travel time to and from Wilkesboro), but I guess I was too worn out to go. I was looking forward to this race, but it apparently wasn’t in the cards. Next year, I suppose.


As for the broken frame on my 29er, that kind of sucks. I was happy to have a backup frame to use as a replacement, because I’m really digging this 29er thing. It was good to have it back and ready for action so fast, but I gotta figure out why I keep breaking bikes. It’s not like I’m some lard ass or anything, but maybe aluminum isn’t the ideal frame material for me. Maybe I should consider something made out of steel or titanium, huh? See y’all tomorrow.
Posted by TheMutt at 9:15 AM

Maybe you should try a bike made out of lead. Or, you could just sit home on the couch. I've never broken a couch by just sitting on it, you know.