Some days when I sit here to write (or type, whatever), my mind draws a blank.  If I stare at the screen long enough, I can usually come up with something.  Today took longer than usual though.  When you write a blog that’s supposed to be about riding bicycles and you don’t get to ride your bicycle, I guess it makes sense.

It’s been over a week since I’ve ridden.  I had high hopes to ride last Saturday, but it starting raining again (which closes everything here locally.)  I briefly though about Uwharrie, but after looking at the radar I saw that the worst was yet to come.  I decided to run a few errands instead.

Just in time for the shit storm. 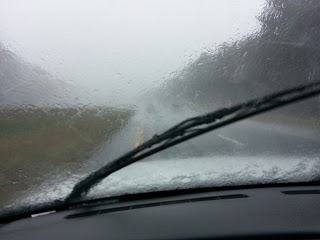 Oh look.  Rain.  We sure need some of that around here.

I was heading up to my local shop to see if he could help me with some parts for a project.  Before I say anything else, I’ll show you what I mean. 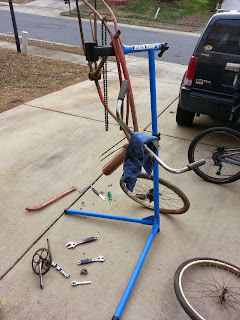 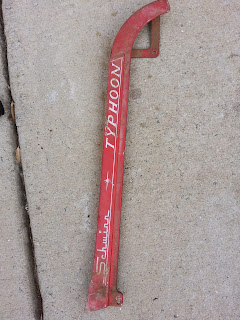 This is a 1950’s era Schwinn Typhoon.  I picked it up last year when the little lady and I went to to see her parents. It had been sitting in the barn for decades, and surprisingly was in decent shape.  Sure, it had some rust on it, but the internal stuff seemed pretty good. 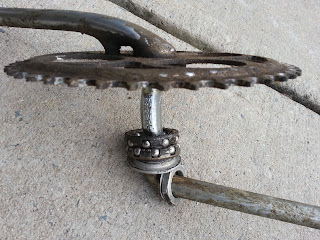 It was missing a seat and seatpost, and the wheels need a ton of TLC.  Rather than tear apart, sandblast, repaint, and rebuild the wheels, I was hoping that I could find some replacement wheels.  The plan is to have my very own Klunker, which may see a little local trail time.  I’m sure it will be used mostly as a pub crawl bike though.

Let me be clear.  I don’t want to restore this thing back to it’s “like new” state.  I’m just gonna get it rolling again, and right now the wheels are the big hold up.  Even if I did restore the wheels, my tire choices are limited.  The rims are a weird size, and they only take one type of tire (unfortunately not a knobby one either.)  It was brought up that I could lace the old hubs to new rims, but I’m not sure it that would be worth it.  New wheels might be cheaper.

My shop couldn’t help me that day.  I knew it was a long shot, but we checked with his distributors and couldn’t find anything with such a narrow hub profile.  I guess my next step is to pay a visit to First Flight Bicycles, since they are known for their vast collection of vintage mountain bikes.

How the hell did those guys back in the day do this shit without The Internets and lots of bike shops to choose from?

Email ThisBlogThis!Share to TwitterShare to FacebookShare to Pinterest
Labels: Klunker, not riding, project