I Kinda Missed It

I'll admit it. I actually like racing my bike.  Not because I'm some competitive douchebag or anything like that.  I enjoy pushing myself to the limit, whether or not I've actually “trained.”  With a two month “offseason” every year, I'm usually fatter and out of shapier than I should be, and I always dread that first race of the season.  For the past five years that first race has been the  Winter Short Track Series.  This year, thanks to Death Virus 2013, I lost all my “offseason” flab.  I've been riding enough too which means I should be more than ready to race in fast circles with a bunch of dirt roadies.

For some reason, I just didn't feel like it.  I had other things to do. 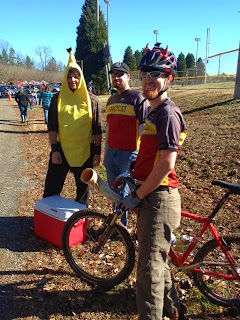 You know me. I'm a DrunkCyclist.  I love beer, a good party, and riding all kinds of bikes.  Sometimes I'm an asshole, and sometimes I can be the nicest guy you've ever met.  Partying in the woods a couple of days ago seemed like a better way to spend my time than actually racing,  and looking back I don't really regret it.  Aside from heckling, drinking beer, and watching people pee in the woods, we also helped the kids have a fun race. 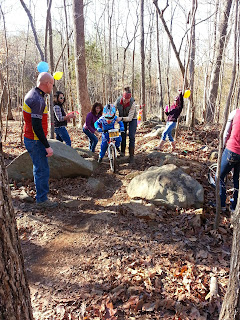 That made my decision the right one.  That and all the positive feedback I got from the racers that we heckled.  We provided a public service out there, so to speak.  Fun was had, beers were consumed, kids were helped, and dirt roadies were heckled.

Will I suit up and race the next one?

Not sure.  The people in the woods might need our ”services.”