You might know me as a beer snob, wanna be mountain bike racer, semi-insider douchebag, or even as a blogger with a few “fans” here and there.  But the only thing that really defines me is the fact that I'm a father.  For almost eighteen years now I've devoted my life to raising my son and it's been the most important thing I've ever done.  Yesterday was Father's Day, but to me every day is.  Still, we had to celebrate.

Lunchbox and I decided to kick off the weekend by spending some “quality time” together racing on Saturday.

We rolled up to the Tree Shaker about an hour before the start, still unsure what we were gonna do.   We were really leaning towards doing an eight hour duo, but I found out that there were only two people registered for the eight hour solo single speed class.  “Oh shit”, I thought, “I have a chance for an automatic podium if I sign up in the class I usually  race.”

I think I saw some confusion on Lunchbox's face.  I know he wanted me to have a chance to get on the box, but he was also looking forward to teaming up with his old man for once.  I thought about it for a brief second and told him we would race together.  Eight hour duo it is.  He was pretty happy.

He opted to go out first, which I found odd.  Since we had no chance of getting on the podium against those “real” teams, I told him to have at it.  I rode down the hill to wait for the race start, and after a few minutes he came rolling by.

He rode with Good Guy Greg for a while at the start. Maybe he thought it was me.  You know, with the Drunk Cyclist jersey and all.

With traffic and stuff like that, I knew I had some time before he came back.  I went back to set up our pit area, which I didn't really have time to do when we got there in the morning. 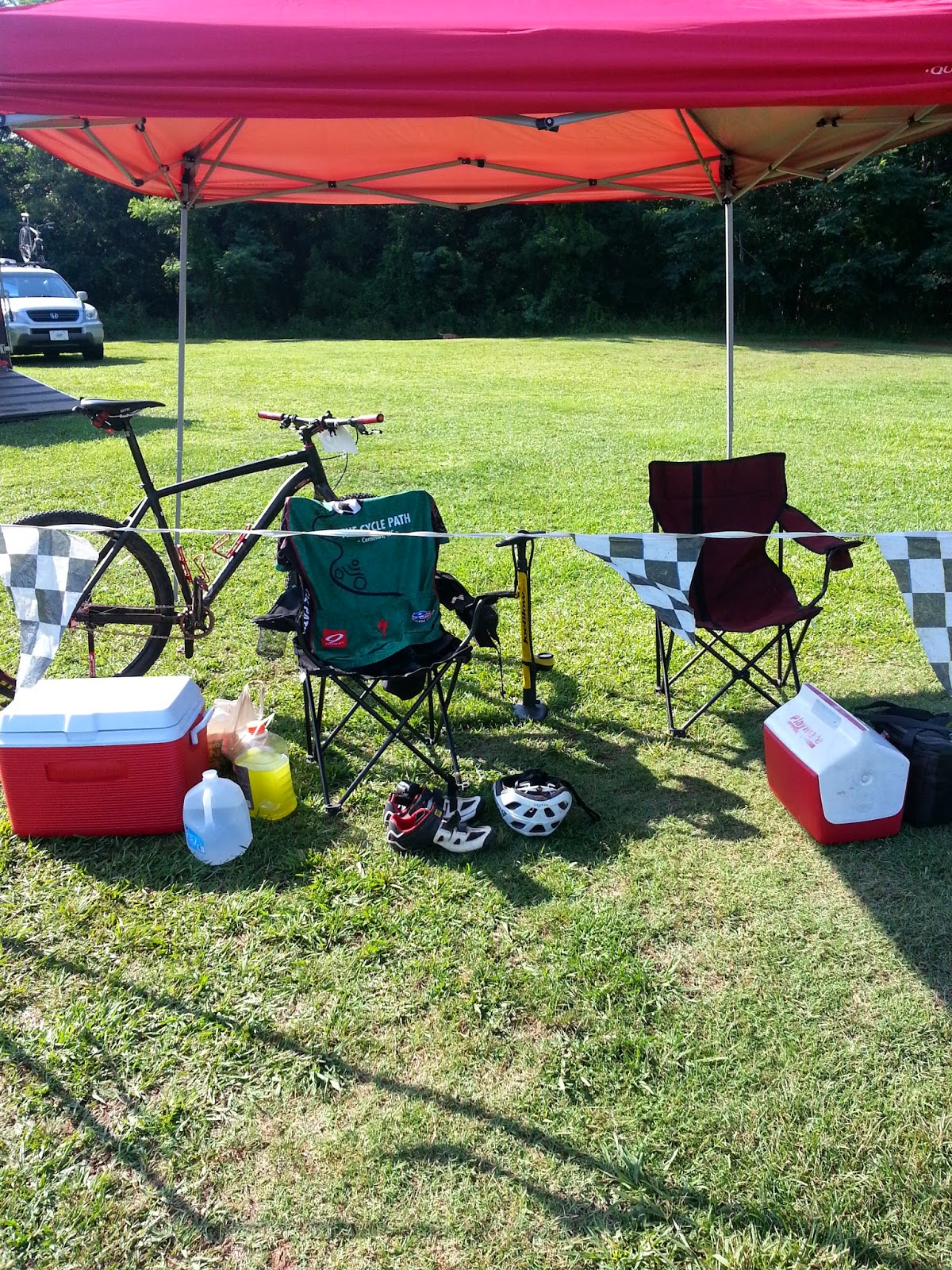 I figured he would do a lap in a little more than an hour, so I just chilled out for a while.  The first rider came in just under forty minutes, which blew my mind.  Who the hell rides an endurance race at a cross country pace?

I kid.  Really.  Actually, it was someone that trains really fucking hard (which I have no time or desire to do.)  I was definitely impressed, but my attention quickly shifted towards the time and when Lunchbox would be coming in.  I got ready about ten minutes before ten o'clock, and patiently waited for my boy to come in.  At the one hour mark, a lot of racers came by.  No sign of Lunchbox.  I paced around, unable to stand still and wait.  I knew he would give it his all, but since I've never raced with him I had no idea what his pace would be.  After about an hour and twenty minutes, he rolled in.

He looked like he was having fun, so that made me happy.  I quickly took the timing chip, strapped it on my leg, and took off like a bat outta hell.  I yelled back to him that I'd be back within an hour.  Knowing that I could rest after my lap, I gave it all I had.  I passed people left and right spinning my ass off in the process (I had a really easy gear on my bike since I originally thought I would be riding solo for eight hours.)  Nevertheless, I felt pretty good. My heart rate was pretty high, but my legs felt strong.  I was having a blast too, which is really different than what normally happens to me during an endurance race.

It was nice for once.

I knew the trail well.  Aside from a few reroutes that had just been completed, there were no surprises.  I handled everything that the trail threw my way, and before long I was on the home stretch of my first lap.  Fifty three minutes later I crossed the finish line and Lunchbox was there waiting to go out again.  We exchanged the timing chip and I watched my boy take off into the woods.

This time he would have to work even harder, since this endurance racing thing isn't something he normally does.  I relaxed for a while, even walking around to visit with those that weren't racing.  I enjoyed my down time, but often my thoughts drifted back to my son out there suffering on the trail.  I knew he would be okay though, but as a parent you still worry a little I guess.

I waited what seemed like forever this time.  He was out there for a while.  Did he flat?  Did he overheat?  Is he taking a dip in the river?  I had no idea.  We were racing, and as a part of a duo you can't really do anything until your teammate comes back.

Damn.  I still had a difficult time waiting.  I'll wait until tomorrow to finish this story though.  That kind of waiting is easy.