We Own The Road

It had been far too long since I hopped on a bike. Any bike. I was going nutty, so I planned a road ride for Sunday morning. I’m not sure why. Maybe it was because I knew I could get in a bunch of miles and not have to work so hard at it. You know, ease my way back into it. Once I convinced myself that I would actually have fun on the road, I invited Little Miss Sunshine along to keep me from shortchanging myself in the mileage department. The plan was for an easy, 25-30 mile spin out of our neighborhood to see where we ended up. 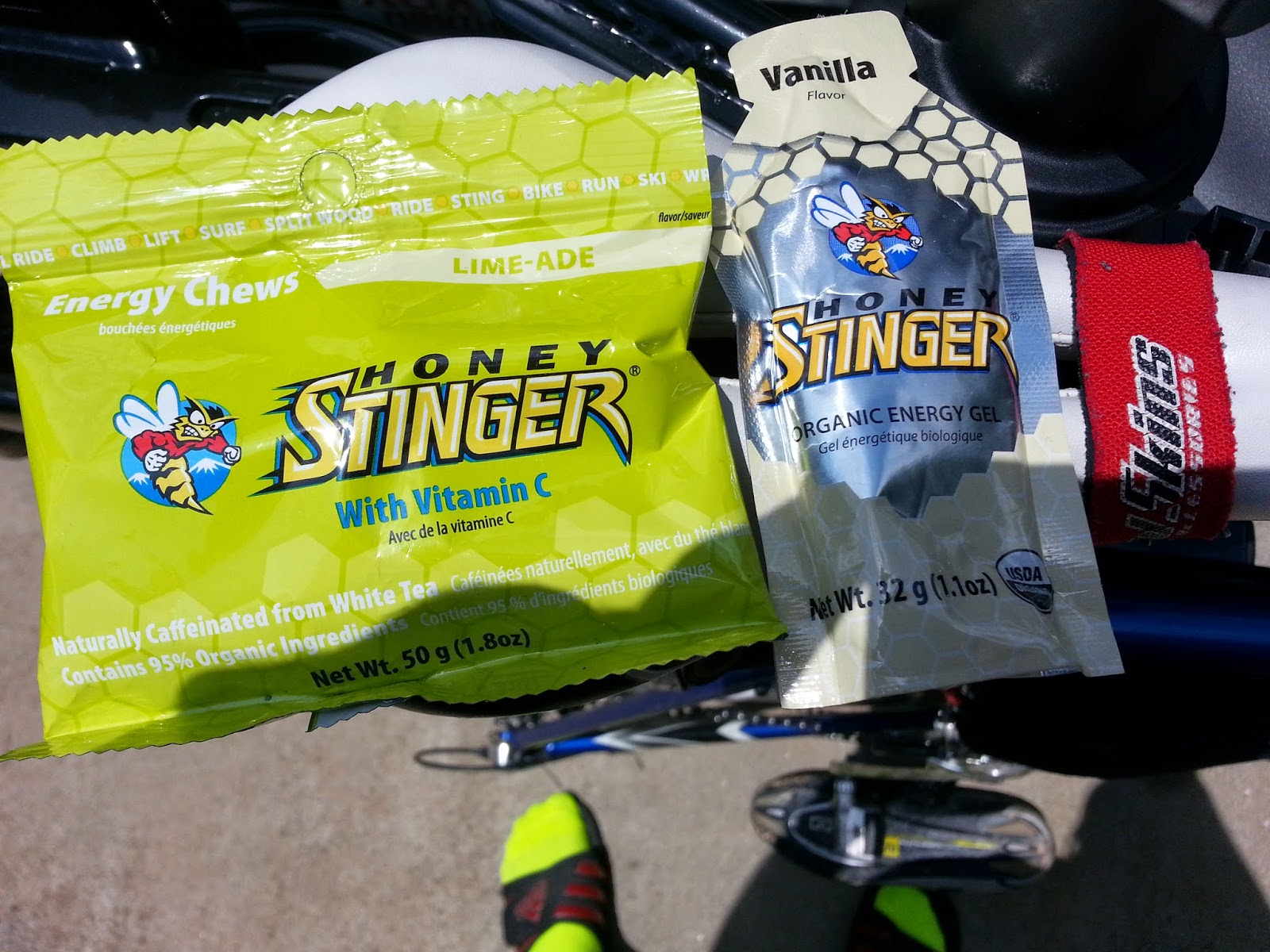 Honey Stinger goodness in case I got hungry. Yum.

We hit the road, spinning easily up the first hill out of the neighborhood. The first part of the ride would be on our local greenway, so we headed up the road to find an easy access point. We road ride by TomTom’s house, but didn’t want to stop for fear of ending the ride there because we’d get caught up talking all day. We settled for a wave. Did he see us? Probably not. We hit the greenway and enjoyed a smooth ride for a while. 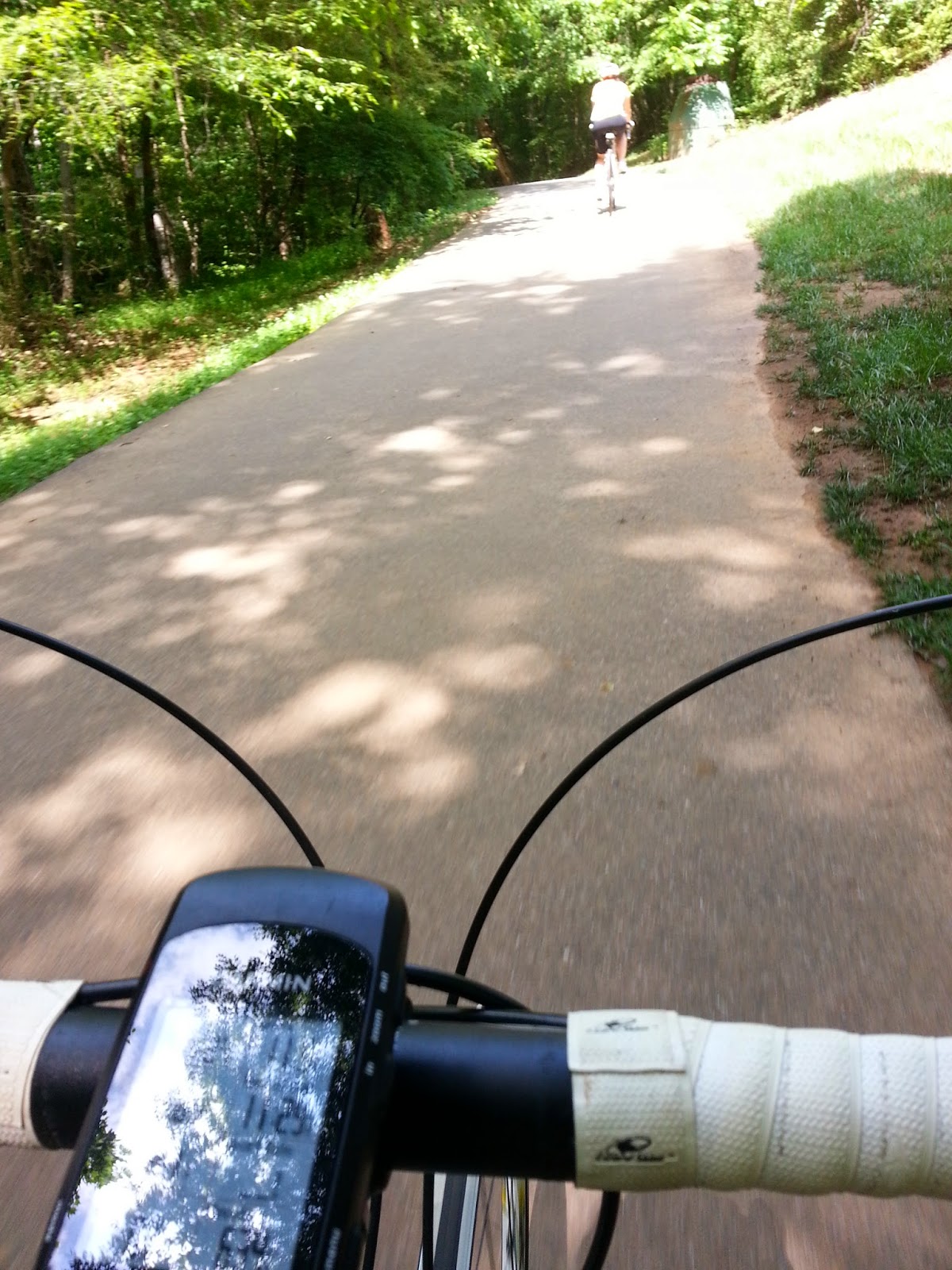 We took pretty much every different leg of the greenway we could, eventually ending up at the end. We crossed a busy road and hit a lightly traveled back road for some “real” roadie action. Traffic was really light (it was a Sunday, after all), but on our way to an intersection a lady in a Prius came buzzing by honking her horn. I gave her the one finger salute, but she was too busy wagging her finger and yelling something unintelligible to see it. We resisted the urge to chase her down at the next red light and just let it go.

Soon after, we found an opportunity to get away from all traffic and get off the beaten path. Construction is still ongoing for a new Interstate loop nearby, so we took a peek to see how far along it was. 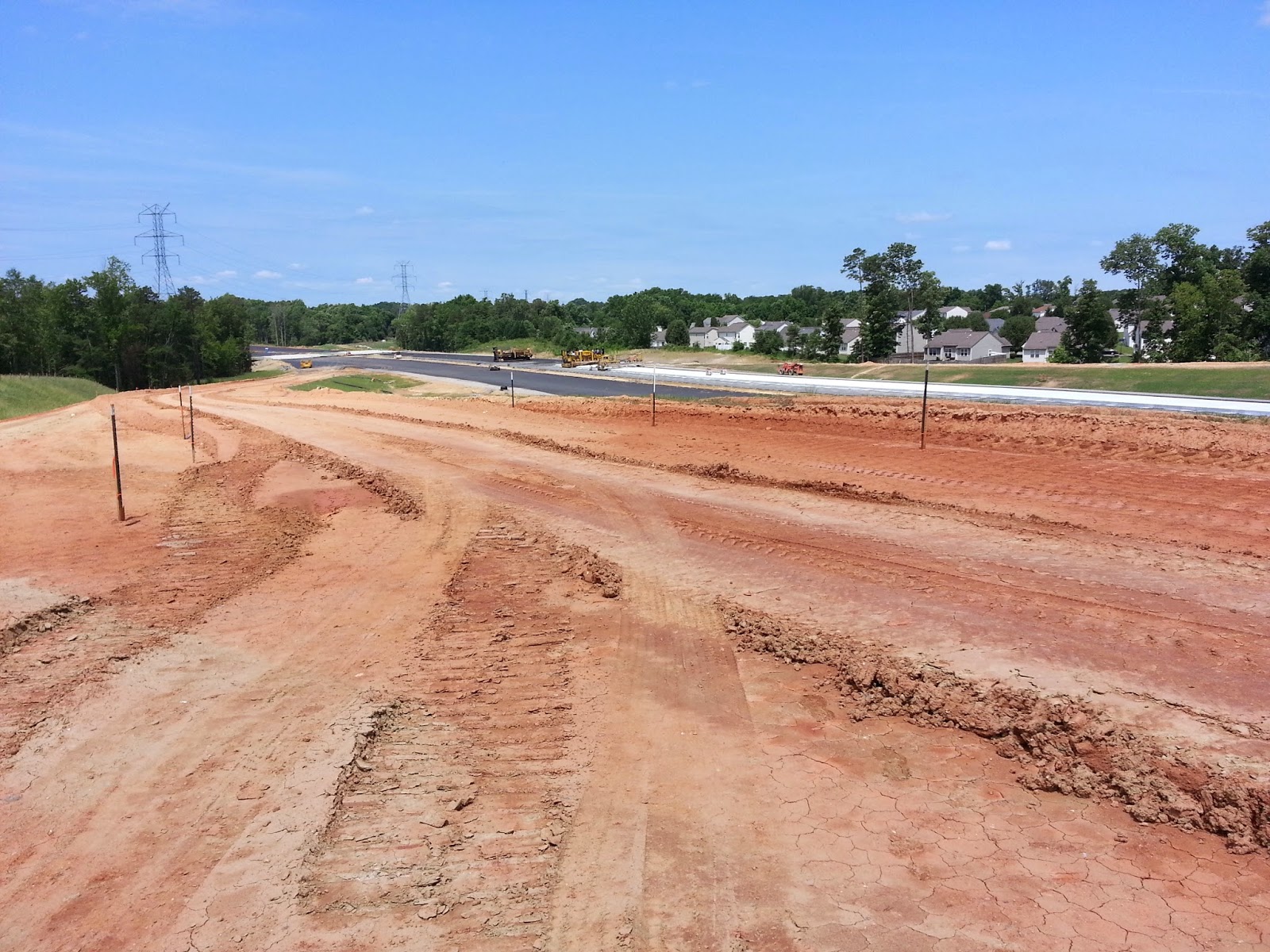 Seeing an opportunity to get in some miles without having to worry about old ladies trying to kill us, we hit the newly paved road. 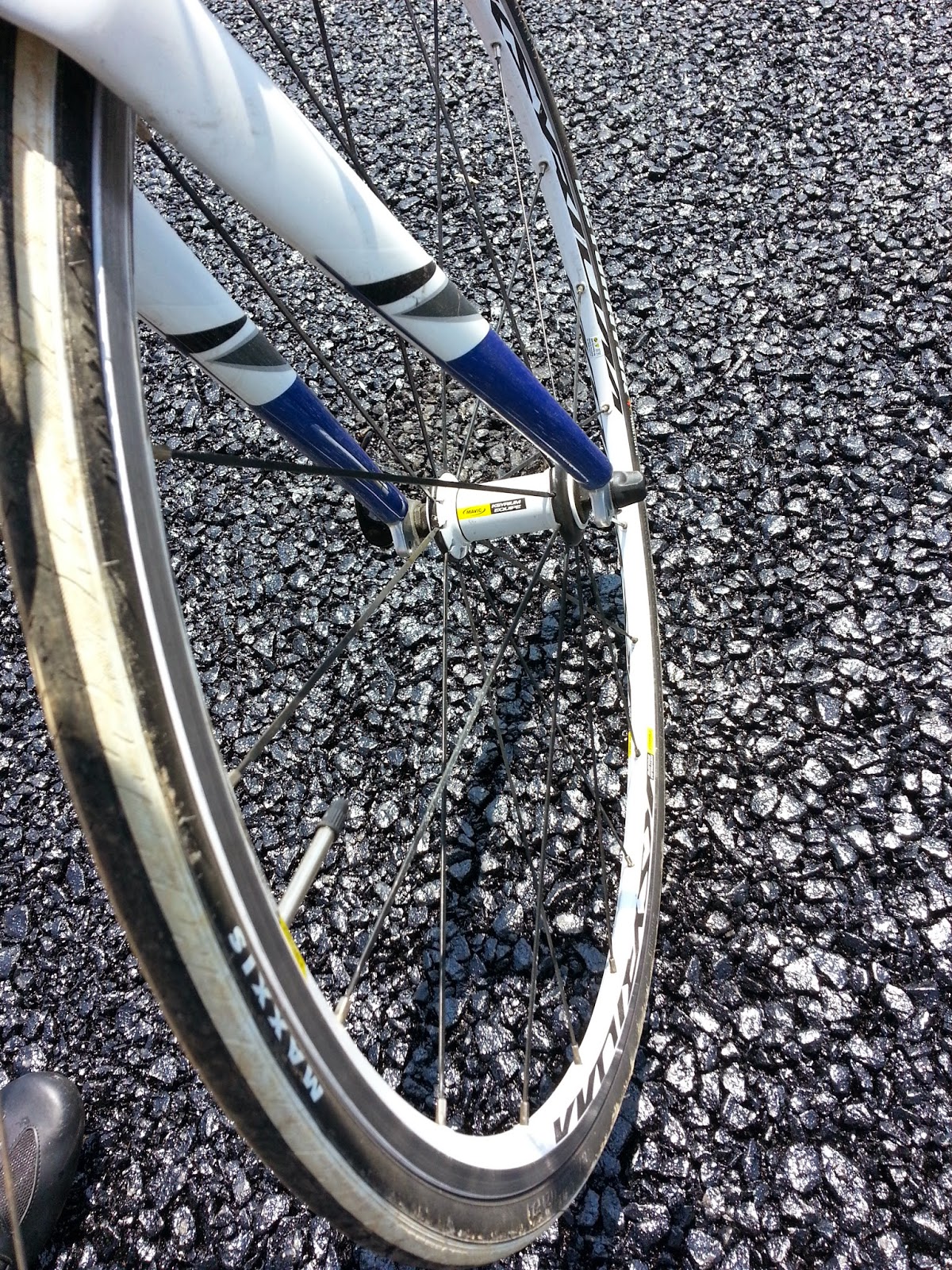 It didn’t look smooth, but it was actually quite nice to ride on. 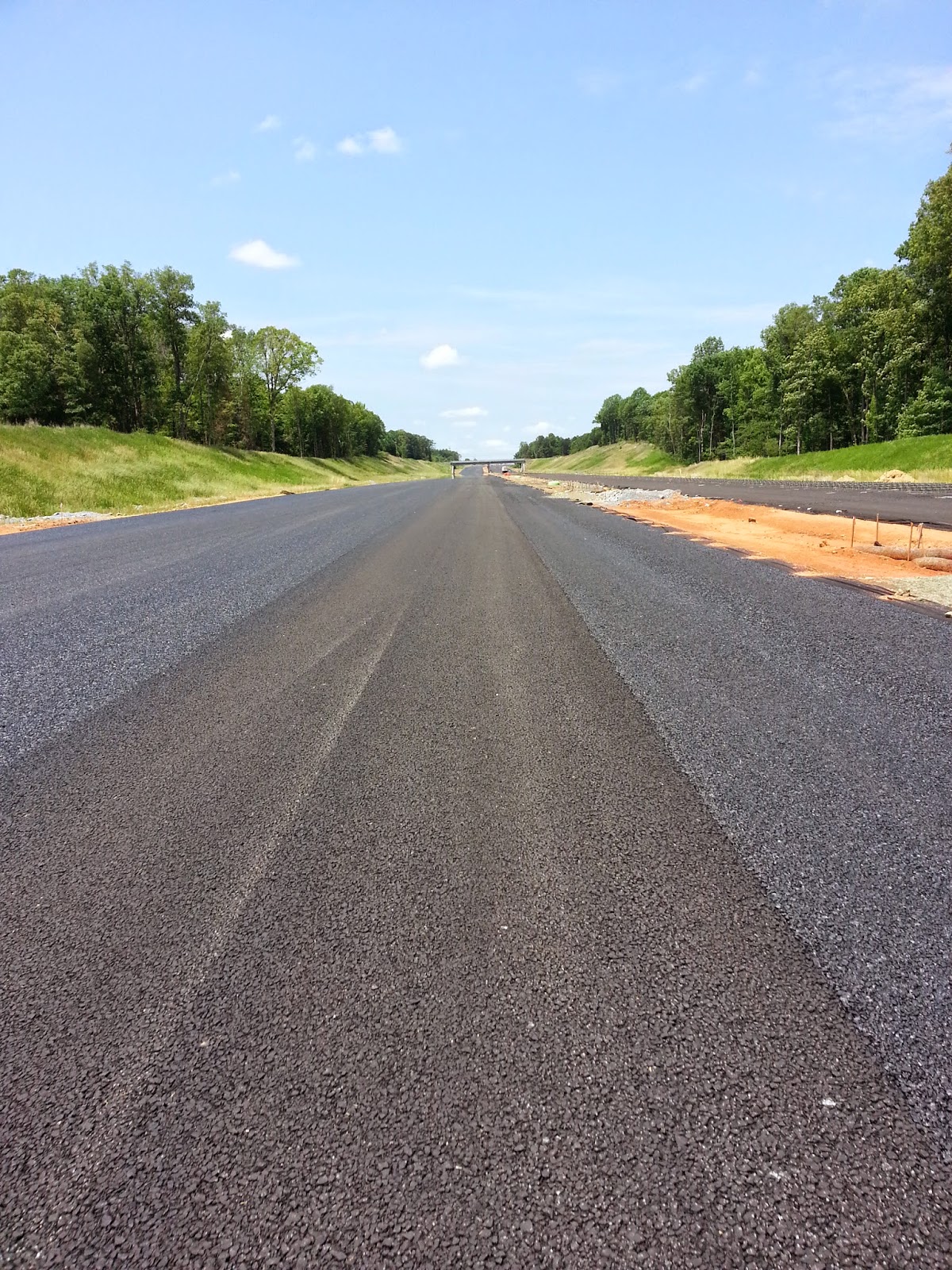 We could use the entire lane, ride side by side, speed up, slow down, etc. You know pretty much anything we wanted. That section of highway belonged to us for the moment, and it was good. We were having a good time, and the weather was perfect. Just warm enough that we had to drink a little. 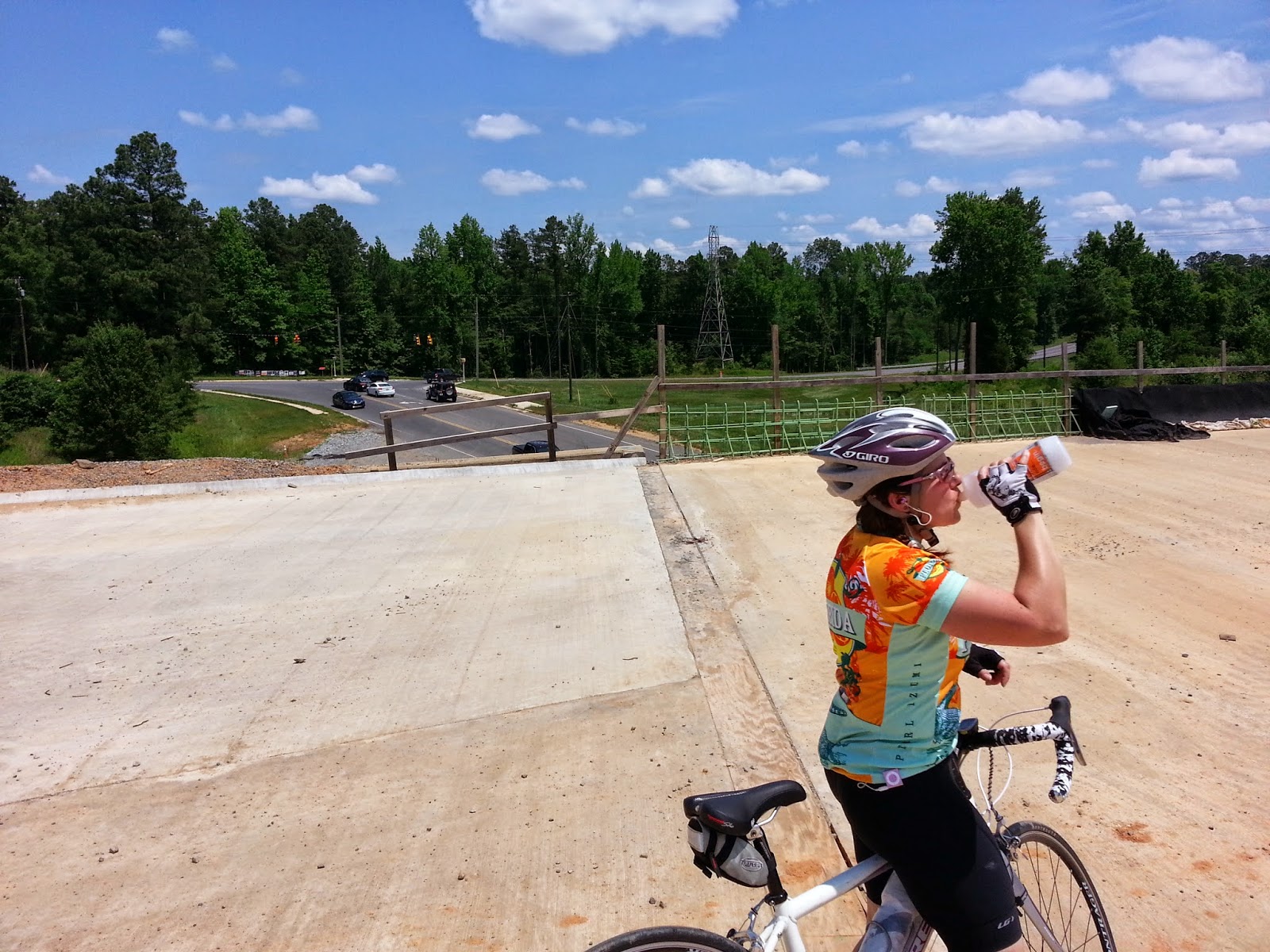 I saw that we were getting close to my goal for mileage, so we decided to start heading home. With bike lanes the rest of the way home, I thought it would be a nice, easy ride. Once we got within a mile and a half of our house, another asshole (this time in a convertible Lexus I Own The Road model), got really close to us (we were just about on the white line) and honked the horn. I yelled out a very pleasant, “Fuck you” and waited for him to stop. He turned down towards our neighborhood and sped off.

It was all neighborhood streets from then on out, so we tried to forget about that and enjoy the rest of the ride. As I glanced over at a side street, I saw Mr. Lexus getting out of his car with some groceries. We took that opportunity to turn around to see if he wanted to finish our conversation.

We rolled up, but he had gone in the house. I said, “Let’s forget about it. This isn’t worth it.” However, Little Miss Sunshine had other plans. I didn’t want any part of it, since I wouldn’t have been very nice if I had a chance to confront him. I don’t have a middle ground. I can either be really nice, or get really angry. I mean, scary angry. Like, I’ll stomp a mud hole in your ass for trying to kill me on my bike, angry. The little lady is much better at this sort of thing, so she leaned her bike up against the mailbox and walked up to the front door and rang the bell. I tried to stop her, but she wasn’t having it.

She had a polite conversation with Mr. Lexus, informing him that she is a real person, and not just some cyclist that was in his way. He made up some bullshit excuse about honking for our safety, but I think she made her point. She wasn’t mean, and I even saw her shake his hand. She has a way of making you feel bad without getting mean, and he got to see it for himself. Hopefully that guy learned his lesson and won’t try to run cyclists off the road anymore.

Even if he did, there are tons of people around that just don’t give a shit. I don’t ride on the road much, but when I do I’d rather not get killed. It seems everyone that I know that rides on the road either has been hit by a car, or has had many, many close calls. That shit needs to stop.

I might actually ride my road bike a little more often if it did. I need to get back in the woods where I’m the only danger to myself.

Or maybe just stick to unfinished highways and greenways when I feel like riding skinny tires.

I rode saturday with Bob on the rode for 18 miles and received my first finger- ugh!! We did NOTHING to deserve that. Boy was I bothered by that.