Talk Me Out Of It

Saturday was a long day and I felt like I accomplished very little.  I ate, drank beer, and worked on a few bikes.  Okay, good enough.  I still wanted more though.  On Sunday, I really wanted to ride my bike (a bike, any damn bike) somewhere.  No trails were open yet, but at least the rain wasn’t pissing all over us.  It was more like an old man dribble down the leg rain.

At first I thought about a road ride.  Then I remembered that road riding sucks when it’s windy outside (and most all other times.)  Then I declared to the little lady,

“You’re supposed to talk me out of dumb shit.”

And just like that, we were off.  While I was happy to be out pedaling, I was not happy to be flopping around in a strong wind. 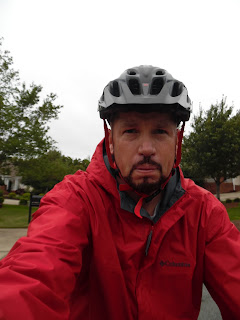 New rain coat is not fancy.  But it works.

Just like any ride where we don’t load bikes on to vehicles, this one started out in our neighborhood and ended up going through other neighborhoods.  If we were “training”, I’d call these hills fun. 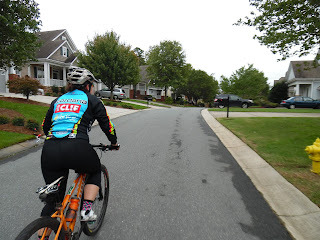 We weren’t training.  But, they were still fun for some strange reason.  Maybe because we were out on bikes.  I dunno.  Or maybe because that if you ride around neighborhoods long enough, you’ll find something fun for mountain bicycles. 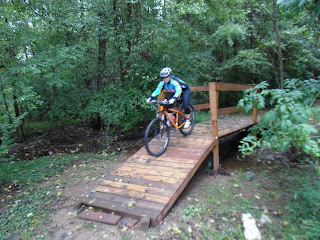 Notice how Little Miss Sunshine gets all rad with the drooper post.  So Enduro™.

I don’t think we really rode very far.  We were gone a little under an hour, but it made of for a week’s worth of not riding due to the shitty weather we’ve had.  Instead of bitching about how the trails are too sloppy to ride, we made the best of it by doing a little neighborhood exploring.  I know, it’s not the same.

But it helped to keep me sane.

Who gives a shit.  All I had to do was get off my ass and onto a bicycle seat.  It turns out that there’s always enough time for that.
Posted by TheMutt at 9:09 AM