After a long (short) week, the little lady and I were looking to have a nice day on the bikes.  We briefly considered DuPont again, but I didn't want to get burned out on one of our favorite places to ride.  We kept trying to come up with something within a three hour driving radius and couldn't figure out anything that we hadn't done before.  Until I had a strange idea...

"Let's go to the Virginia Creeper Trail!" I exclaimed.

Little Miss Sunshine had been there before, but for some reason I never wanted to go.  I figured it would be silly, with it's slow, steady downhill gravel path of boredom (or so I thought.)  We decided to do it anyway, since we're pretty good at having fun no matter what we do.  So, I cut myself off from beer drinking early Friday night so we could head out early Saturday morning.

After a trip from here to Boone, it was back roads across the mountains and through several meth towns in Tennessee to get us into the town of Damascus, VA.  Our first stop was to inquire about a shuttle to the top, because I hear that's the way to do it. 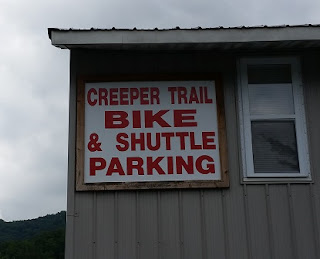 There are tons of these shuttles all around town.  We picked the first one we saw.

A little while later, they started loading up bikes.  One of the guys looked at our bikes and said, "You guys must be pretty serious cyclists." 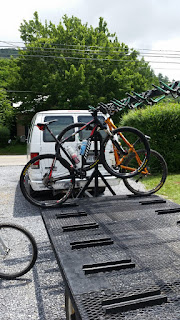 I guess our bikes were nice compared to what they normally see up there.

After they filled up the trailer, we climbed in the van with a bunch of other folks for the thirty minute ride to the top.  Windy roads nearly made me sick (I'm not used to being a passenger), but before we knew it we were at Whitetop Station. 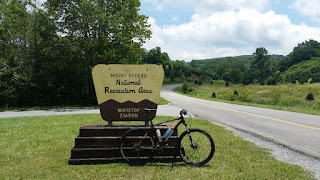 The view up there was pretty cool, which would be a recurring theme for the day. 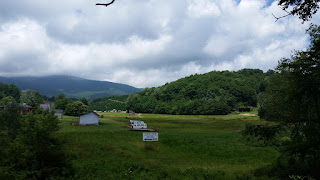 The "trail" was wide, but not as wide-open as I thought it would be.  We were ready to roll, and I was ready to have fun. So was the little lady. 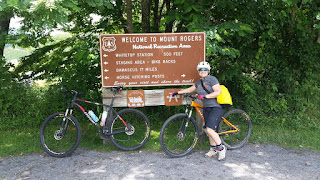 And moments later we started flying downhill, much faster than I thought we would. 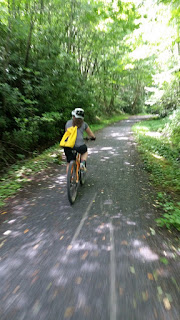 But we stopped often to take photos and take in the views all around us. 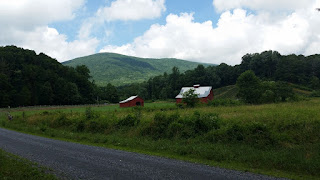 And we also stopped at the little former train stations along the way. 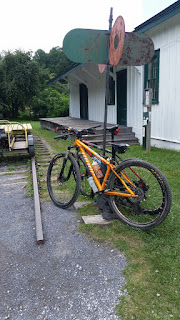 The route was mostly shaded and followed a creek/river for most of the way.  Every once in a while we would stop to check it out. 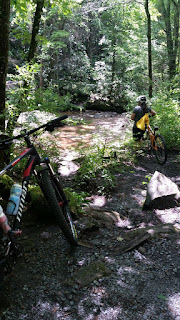 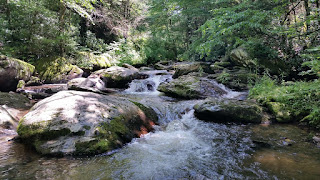 There were lots of bridges, which had been rebuilt since their days of carrying trains across. 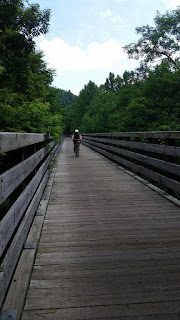 And we even crossed the Appalachian Trail a couple of times. 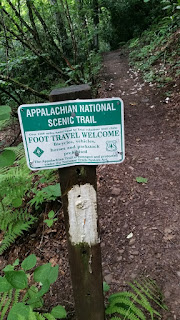 No bikes allowed, but every once in a while I would find some singletrack to ride. 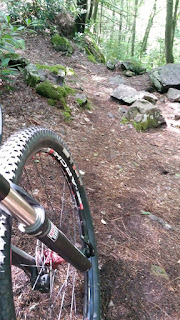 But mostly we stopped to look at pretty stuff. 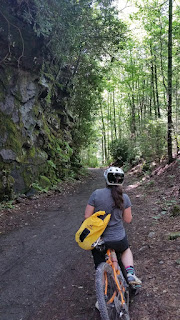 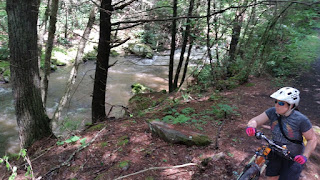 Every so often, the trail would open up to a little town, and there was always a place to buy stuff/use the bathroom/hang out.  It was obvious as we approached one of these establishments. 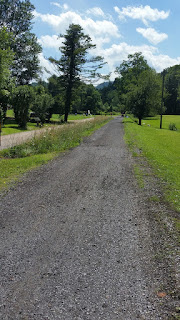 And we always stopped, because it was the thing to do. 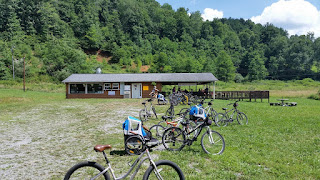 At this point, we weren't even quite halfway.  It didn't matter, because I was having a blast.  My new motto these days is "Ride bikes, look at pretty shit, drink beer, and have fun."  We were well on our way there.  With more to go on our adventure, I eagerly awaited what was up ahead.  Riding downhill through the beautiful Virginia countryside, I was enjoying our day a lot more than I thought I would.

And I was barely pedaling too.  I could get used to this.