Wow, it looks like I'm getting back to sorta regular blogging.  Maybe.

So last week I had good intentions (and was pretty busy), but when I finally got ready to post something I just couldn't.  You see, we (our cycling community) lost a great man last week to a tragic accident.  Jeff Archer, the proprietor of First Flight Bicycles and the Museum of Mountain Bike Art and Technology, lost his life to a drunk driver and I (like everyone else) was pretty broken up about it.  I didn't get all the way up to Statesville to visit as much as I wanted, but that didn't mean that hanging out there wasn't one of my favorite things to do. 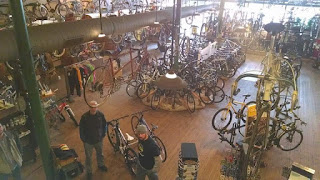 Jeff has done so much for the local bike community, and he's the primary reason that we have a trail system in Lake Norman State Park.  He was one of the most knowledgeable and helpful people I've ever met too.

Which brings me to my ride over the weekend...

Quite some time ago, my in-laws gave me an old Schwinn that had been sitting in a barn.  Instead of restoring it, I decided to turn it into a Klunker.  I went to see Jeff at First Flight because of his extensive knowledge about old bikes, and he ended up providing a set of modern wheels to get the thing rolling again.  He actually did a lot more than provide wheels though.  Click here to read it again.

So I've told that story before, but I probably forgot to mention one part:

The day I picked up the wheels, we chatted a bit about how I planned to use the bike.  I told him that it would mainly be a pub crawl bike, but that I intended to one day take it on some long, downhill gravel roads "like the old timers did."  He laughed (I can still hear him), and said he couldn't wait to hear all about it.  I promised him that I would, and that I'd probably be back in there for more parts when I did.  Unfortunately, he never got a chance to hear all about it because I kept chickening out.

That changed on Sunday.

There was a memorial service for Jeff that day and I wanted to go to pay my respects.  I woke up and decided that I didn't want to be sad about this anymore and instead I would do something I promised him I would do.  I grabbed my nearly sixty year old bike and headed over to our little mountains to the East. 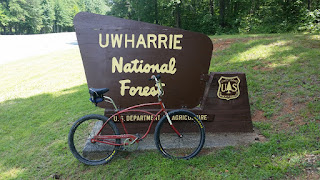 With the goal of riding fast on the downhills, I had to go up first: 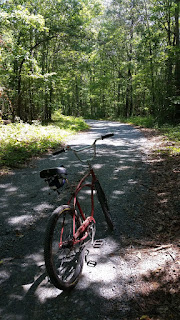 It was high noon and nearly one hundred degrees.  I was on a bike that weighed probably fifty pounds, had a ridiculously hard gear, and might even break under my weight.  I was in for a long day.  While it may seem like a dumb idea trying to ride that contraption "like the old timers did", I was keeping a promise I'd made a few years ago.

It still meant something to me, even though now it was probably too late.