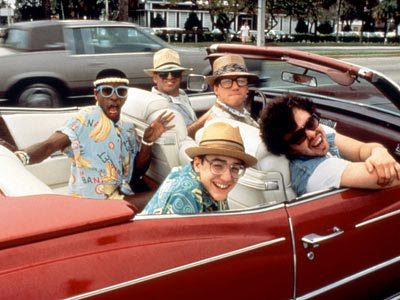 When I posted a couple of days ago about my adventures in the mountains of North Carolina, I didn’t think much of it. Sure, a lot of people read this poor excuse for a blog every day, but I never thought that anyone was really paying attention. Hell, I hardly pay attention to it when I write the stuff (obviously.) What am I talking about? Well, I received a comment on the above mentioned post from someone that claimed to be from DeFeet International. I found it a little peculiar that someone was actually paying attention, so I investigated it a little further. Could this be legit?


When I used The Google, I discovered that the comment was from the head honcho over there at DeFeet. Actually, The Google took me to the DeFeet web page, which I’ve already visited several times. See, I told you I don’t really pay attention. Anyway, I noticed that he was listed as the Founder and Chief Sockologist, which made me laugh. I was laughing at the cleverness of the name mind you, not because I thought it was silly. I could only dream of having such a cool title. Apparently Shane is the man that started it all for Defeet. After doing a little more snooping (I’m getting good at it), I found the story of how DeFeet came to be:

Okay, since I’m too lazy to type it all out, or even summarize it, here is a link to a blog post on the DeFeet website:

Good stuff, indeed. I should have done my homework before our visit, but that goes against the fly by the seat of my pants style I grown accustomed to lately. Who needs a plan, anyway? Well, maybe if I had a plan, I would be a much better racer. That may take all of the fun out of it though. Fun is why I ride bikes, and I’d like to keep it that way. Here is a sample of what I picked up during my visit: 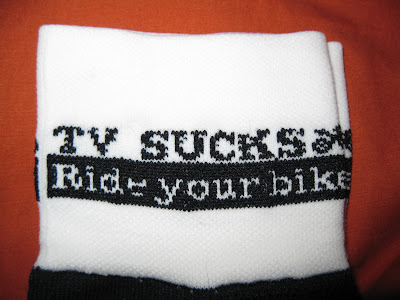 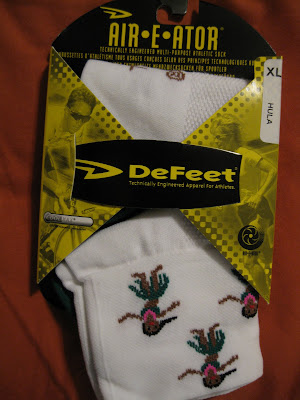 Anyway, it looks like I’ll get my wish of a “real” tour, instead of the snooping I did last Friday. I’ll have to plan another trip out that way really soon. I’m looking forward to it. In the meantime, I’ve added DeFeet to my list of “Click These and Give Them Your Money.” Like I’ve told you before, I like to support companies whose products I use, and I definitely use Defeet stuff. In fact, my local mountain bike club, the Tarheel Trailblazers just got our latest order of custom socks from them (I had nothing to do with the ordering process, but I do wear them.) It’s nice to know that they came from a company that’s only a short drive from Charlotte. 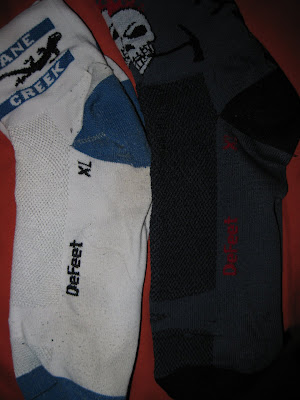 
If I like a product that I am using, then I will stand by it and promote it so others can share my joy. That’s only fair (my definition of fair I guess.) I am in no way compensated to promote DeFeet, but I’ll do it anyway. They are local to North Carolina, they obviously support cycling, and they make good stuff, period. That’s enough for me. Shane did give me a shout out though, via his Twitter page. Thank so much for that, and I’ll see you soon!

I love my DeFeet socks and arm warmers! They make the best stuff ever!

Thanks for the comment Scott. Make sure go to your local shop and buy some more, or better yet, go there and pay them a visit. You'll be glad you did!