Yesterday's post was it. No more (unless I sell it of course.) I did do a bit more spring cleaning on Saturday than I told you yesterday though. I actually got to play mechanic on some of the bikes in the B-43 fleet. Since I couldn’t go ride, this was the next best thing. Wrenching on bikes is a great stress reliever, so I was glad to have things to do.


First, was the one and only Tigger, Little Miss Sunshine’s bike. She took it for a spin after work the other day at North Meck, and she had a great time. However, when she got home she told me that there was a “customer bike” in the shop. She proceeded to tell me that there were some shifting issues, and that it should be looked at immediately. Payment would be worked out later (I’m thinking banana pudding.)

After throwing it up on the stand, I looked it over. Was this an issue that was caused by my ineptitude? Nope, it was just your run of the mill cable stretch, which is common on bikes after they have been ridden a while. I made a few adjustments on the rear derailleur, and it was smooth shifting again. Even though it only took me mere seconds to diagnose and fix the problem (yeah, I’m that good), it will still cost her. Why, just yesterday I saw the ingredients for some good ole’ banana puddin’ in the kitchen, and she was mixing it up. She finished it just in time for us to have it for dessert last night. Mmmm, good.


Next up was my one true bike love, Goose. After riding so much lately I think I may have decided on a proper steerer tube length for my fork. No more jacked to the max, or giant stack o’ doom for me. I had placed the headset spacers in different configurations, so I at least knew the shortest length I could get away with. 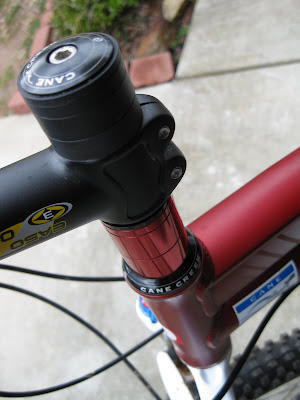 You see, that shit on the top of the stem just looked too ridiculous. It had to go.


I removed the stem, marked the steerer tube, and grabbed the pipe cutter. It was time to say goodbye to the stock length, and say hello to a normal looking stack. 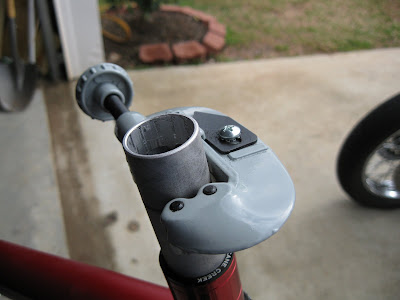 After I lined it up, I started cutting. 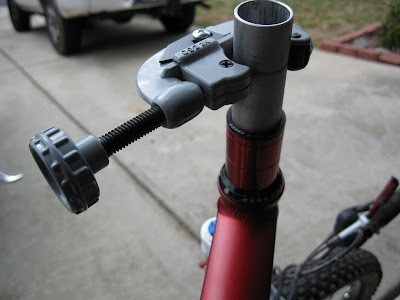 I cut it perfectly the first time (I told y’all I’m that good), and grabbed the file to smooth the rough edges. After that, I decided I would try a little bit lower stack height, and I swapped out the spacers accordingly. Yes I know I just cut it, but remember that I said that it was the shortest length I wanted. Now I am free to try lower positions with the option of going back to the height I initially desired. You can’t uncut it, after all. 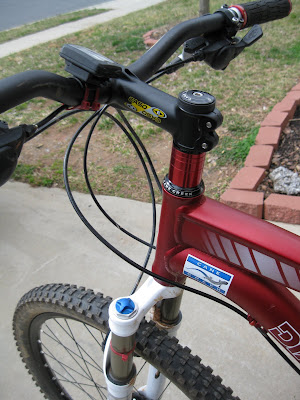 It’s not much lower than what I had been riding, but little adjustments like that can make a big difference. I hope to get in plenty of rides between now and the start of the 6 Hours of Warrior Creek next month. If I like it where it is, then I will cut it again. If not, I’ll remove the top spacers and put everything underneath the stem. It’s not rocket science, after all.

After the fork business was done, I gave Goose a well-deserved bath, making sure to get the grit and grime out of every nook and cranny. I washed it after the one race I did on it in the 2010 Winter Short Track Series, but I have to confess that I wasn’t that thorough. The one race we had in the snow was muddy, so I knew I needed to really give it a good cleaning. 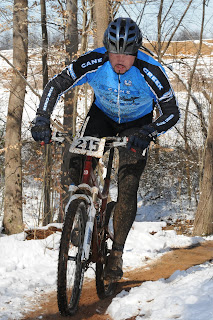 I had this really annoying sound from my bottom bracket, and I just knew that it had some dirt in there. I removed the cranks and cleaned out the bottom bracket shell and bearing with a clean rag. Honestly, I’d been meaning to do this for a while now, but the beating my bike took in the Winter Short Track Series was the straw that broke the camel’s back. I regreased everything and put it back together, and I was very happy that no permanent damage was done. After a quick once-over on the drivetrain (and making a few adjustments here and there), good ol’ Goose was as good as new. Now at least my bike will be ready for the six hour sufferfest I’m doing next month. All I have to do is get in a few more rides to decide on a final stack height on the stem, and I’m set.

Since all of the local trails were soaking wet, I knew I wouldn’t get out at all until early in the work week. I still needed some mileage though, so I grabbed the road bike on Sunday for some climbing and car-dodging fun. It wasn’t that fun, mind you, but at least I got to ride. I learned that day that the road bike is good for getting some quality miles, but there is no way I could give up the mountain bike. I also learned that a good day on the road bike is not better than a bad day on the mountain bike. There is no substitute for good old fashioned singletrack fun. I am in no danger of becoming a full time roadie, that’s for sure.
Posted by TheMutt at 8:30 AM

P.B. (I still think you need a handle for this blog),

I plan to ride today, although I am currently stuck at work. I have a lunch date with the bike today at North Meck. I would rather go to the WWC, but I don't think I can swing it during my lunch break.