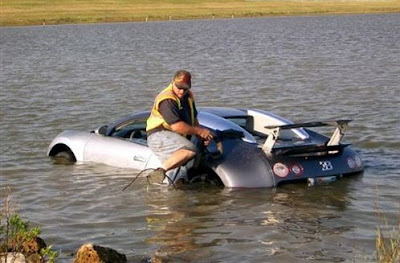 I’m back in the water, and it’s strange. I had taken a break from swimming for a while, concentrating on the bike only. With a few triathlon events on the horizon though, I’ve started back with my swim-bike-run routine, in hopes that I can enter one or two (or more if my schedule permits.) This week is actually the first time I’ve been swimming in months. My first swim back at the Mecklenburg County Aquatic Center was a little weird, to say the least. I managed to crank out 20 laps, and it hurt like hell. I was dizzy, but I had to press on for the sake of “training.” I’m pretty sure that it won’t take long to get my sea legs back, so I’m not too worried about it. I must have built a good base before I hung it up for a while. That’s encouraging.


While I was resting after a few warm up laps, I noticed that the guy in the lane next to me was instructing a couple of young kids. They were working on flipping over at the end of the lanes, and I overheard an odd conversation:

Instructor: Breathe out and flip over. That’s all you have to do.

Little girl: I keep getting water in my nose

Instructor: That’s okay. There’s nothing wrong with getting water in your nose. It’s completely normal and it won’t hurt you.

Uhhh, what? Isn’t water in your nose a bad thing? I know it doesn’t feel nice. Maybe that old wives tale about drowning in a teaspoon of water is just that…an old wives tale. This guy was a qualified swimming instructor, after all, so it wasn’t my place to ask questions. I finished my pool time and got the hell out of there before he started waterboarding me just for listening ito their conversation.


My first “confirmed” tri is the XTERRA Whitewater in July. I say confimed because it’s the one I’m itching to do most. While I may squeeze in one or two before it, the XTERRA Whitewater is a can’t miss race for me. Fellow B-43 members Mr. Shepard and Senior Oeste are coming up here from The Sunshine State to join me in the event. Mr. Shepard had ridden the trails at the U.S. National Whitewater Center before on his previous trips to Charlotte, but this will be the first time that Senior Oeste had ridden a mountain bike anywhere here in NC. While he is an experienced triathlete, an off-road tri will be new to him. He has montain bike skills no doubt, but hopefully he can get up here for a pre-ride before the actual event. We’ve been trying to coerce him into a trip, but our attempts have been unsuccessful so far.


The trails at the U.S. National Whitewater Center are right in my backyard so to speak, and my familiararity should give me somewhat of an advantage over the out of town competitors. With over 800 feet of elevation change, the trails are no picnic, but this will definitely make the bike leg a bit easier that the one I did last year at XTERRA Uwharrie.


Click the link below for a pretty nice video of the trails at the Whitewater Center.

That’s pretty much all I have for today. My lunchtime fun rides are over for now, so now I’ll have to start hitting up the trails or the road after worky time. My next big ride is this Saturday, when I’ll be participating in the 10th Annual CSC Spring Training Ride. Yeah, it’s a road ride, but at least I’ll get some good mileage in. I plan on doing the 55 mile option, which should be a nice tune up for the 6 Hours of Warrior Creek the following weekend. Maybe I’ll squeeze in a nice mountain bike ride on Sunday if my legs cooperate. I need another chance to get Awesome anyway.
Posted by TheMutt at 6:25 AM

Do you not mean Señor Oeste rather than 'Senior'?

Aw you shut up Ape. Spell check got me on that one, although he is an old bastard.