While You Were Away

So yeah, I had a good time on vacation. It was nice to get away from the “Rat Race” for a while, and do a whole lot of nothing. Little Miss Sunshine and I spent a few days in the mountains of North Carolina, and it was just what the doctor ordered (that is, if I had talked to a doctor about it.) While I won’t get into the details of our anniversary weekend too much, there were some bicycling-related adventures, among other things. On our way out to the mountains, we decided to take advantage of North Carolina’s abundance of vineyards. 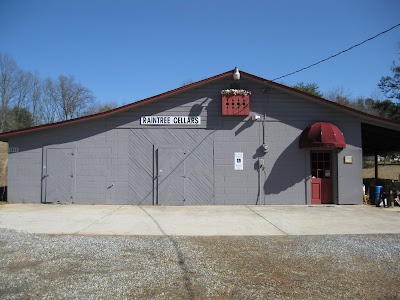 This little gem was in Connelly Springs, NC, on some old country road near what we suspected to be a cock-fighting ring (clean thoughts here people.) I didn’t take any photos of said operation, for fear of some meth-head coming out and firing a few shots at us. We ducked down and headed into the winery, and had a nice chat with Mr. Yoder, the proprietor of this fine establishment. This seventy-something year old man had turned his hobby of winemaking into a thriving business, and he was more than happy to show us around. 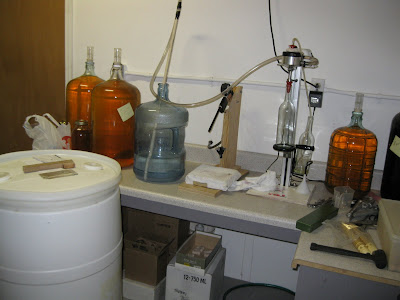 This wasn’t one of those fancy winerys that you would normally find on a wine-tasting tour. Rather, this guy was basically one step above running this out of his garage. In fact, the building was some kind of old garage. The tour was interesting nonetheless, and we talked about the similarities of his winemaking and my own home-based beer brewing. I could see myself taking this same path one day, especially if my career as a bicycle racer goes down the tubes (which is highly likely you know.) He did have some advanced equipment, such as temperature control devices and a fancy label maker. 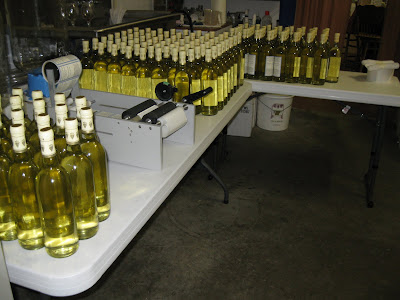 Mr. Yoder was kind enough to let us see his behind the scenes operation, and he was more than happy to let us sample everything he had available. He even told us stories about how he came up with the names of his wines, and how he got started in the business. If you're ever out near Connelly Springs, NC, please pay a visit to Raintree Cellars and enjoy some homemade (but licensed for sale in NC) wine. You’ll be glad you did.


While we did visit a few other winerys in the area, I also managed to squeeze in a visit to a local company that manufactures cycling clothing and accessories. Just up the road from Mr. Yoder’s place, we found the worldwide headquarters for DeFeet International, makers of those cool cycling socks we are all addicted to. 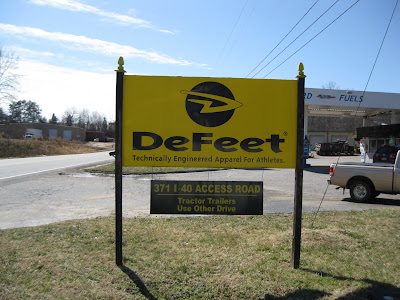 Just like the trip that Lunchbox and I took a while back, Little Miss Sunshine and I found this little gem tucked away in an industrial area off the side of Interstate 40 near Hickory, NC. We parked in the lot and saw this small, rather unassuming building in front of us. We decided to barge right in like we owned the place. 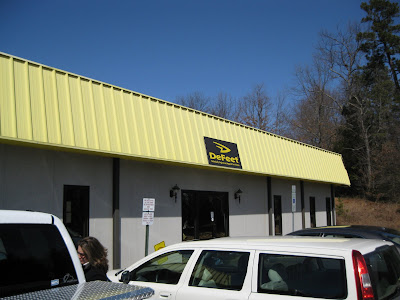 While I don’t have a relationship with these people like the one I have with the fine folks at Cane Creek Cycling Components, we still thought we could get in there and be nosey. I had heard that they have a little “outlet store” full of socks and other cycling accessories, so it was worth a shot. We got to the front window, and we were greeted with a rather stern-looking lady that must have been in charge of their security.

Me: “Ummmm, hi. We’re here to check out your socks and stuff.”

DeFeet Front Desk Lady: “Sure, come on back.”


And just like that, we were in the building. I didn’t have to mention that I am an unsuccessful bike racer, or that I had a mildly popular blog that is read by people all over the world. Maybe she was expecting us. Or, maybe they just let anyone in. Who knows.

We found this little room inside that had a huge selection of socks, arm warmers, leg warmers, and other things. Even though we have more socks than any one person could ever need, I was still pretty excited. Little Miss Sunshine and I started looking through the selection and filling up our arms with whatever we could carry. 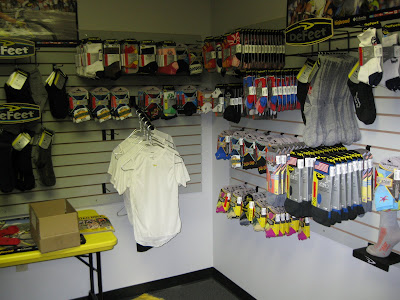 Since I didn’t know anyone there, I was hesitant to ask for a tour of the place. Lunchbox and I got a tour of the Cane Creek facility because I am a sponsored rider (and I use that term loosely), but I really wanted a tour of this place too. Would I have to send these guys a love letter asking them to back my pathetic racing adventures? I didn’t want to wait that long, so we just started wandering around. Some of the people in the offices were looking at us, but no one told us to get the hell out of there. We saw some neat things while we were snooping around.

I bet this thing was fast back in its day. 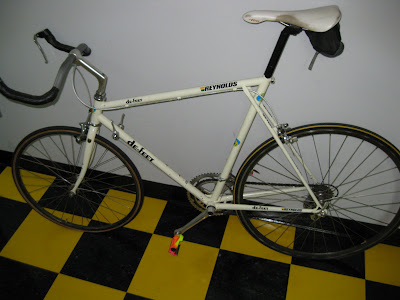 They had an assortment of old jerseys hanging on the walls, so I snapped a photo of this one: 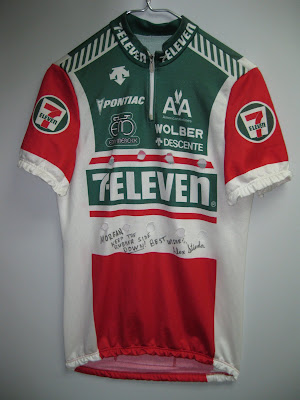 We started feeling a little bolder, and stepped into the main office, where we were greeted with this cool looking machine: 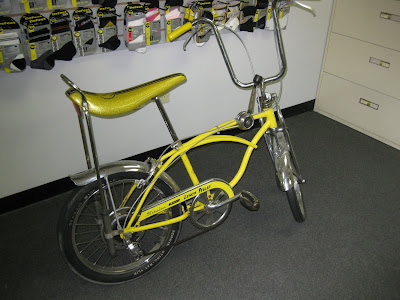 I gotta say that the trip to DeFeet was a success. I knew we would be able to buy some socks and junk, but I didn’t think we could weasel our way into a tour. Eventually, the lady at the front was more than happy to talk to us about socks, bicycling, and the weather, so I guess we were “in.” At first, she was guarding the place like a frontier soldier, but she must have fallen under the spell of my awesomeness. Either that or Little Miss Sunshine made her feel like we weren’t a couple of douchebags. She does have a way of charming people. I guess that means that I am welcome back there again if I want to go. In the meantime, maybe I can write them a love letter and see if they can hook me up. You never know.
Posted by TheMutt at 9:34 AM

Thats so cool you come to DeFeet. Next time drop me a line and I will give you the full tour and lots of stories. Thanks for coming by and "ya'll come back now ya hear!" Shane
scoop@defeet.com
twitter @coopdefeet