The B-43 Cycling Vacation Tour was in full swing, but we hit a small snag on Wednesday morning. We had originally planned to ride Sherman Branch that morning, but a wee bit of rain had thwarted our plans. While we plotted our next adventure, the DPC and Mr. Shepherd went for a short road ride. As for me, I spent a little time in the shop taking care of some odds and ends. As the day wore on, we figured that our only chance to ride would be to partake in the Summer Series at Renaissance Park. I had heard that the rain had spared those trails, so we headed out there.


When we arrived, we had plenty of time to get ready (which is really unusual for me.) While I got got caught up in some chatter with some local racers, the DPC and Mr. Shepherd headed out for a warm-up lap. Eventually I was able to break free from the chit-chat and headed out as well. I didn’t really feel like racing, so I hammered around the course to see if I had enough in me to participate. At least I would get in one good lap, I figured. Eventually I caught up to Mr. Shepherd and the DPC, and hollered out, “On your left!” as I passed them by. I figured I would give Mr. Shepherd a little race practice, and it was all in good fun. When we got back, I decided to register for the race. The DPC would be our official camera guy, since he didn't feel up to doing some hot laps. Mr. Shepherd and I got ready: 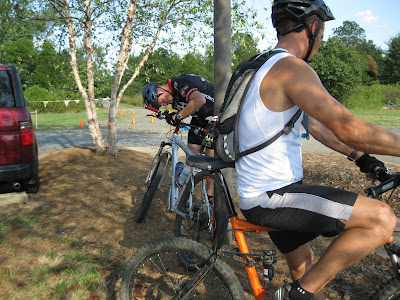 From this point on in the post, I’ll just stick to my race. Since Mr. Shepherd is a contributing member of this blog, he can tell you all the story of his race, in his own words. We raced in different classes anyway, so I didn’t see him after I started.


As usual for Renni, we started at the bottom of a long gravel climb. I took off at a moderate pace, just trying to get in a decent-paced ride. I managed to get somewhere in the middle of the pack, and I didn’t feel too bad. I stayed with the group, flying through the trail. I was actually surprised that my legs felt so great, especially since we had just spent the last three days riding nonstop. 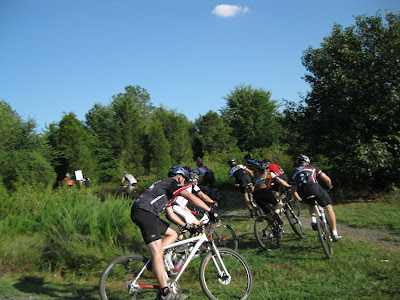 As I headed down the trail, I took a corner super fast, and leaned in. Suddenly, I felt my rear wheel wash out. It wasn’t due to my poor bike handling skills though, rather it was because my tire decided to spit out all of its air again. Shit, are you kidding me? Another flat tire? Damn it.


I pulled over to the side of the trail and watched as the rest of the pack went by. At first I contemplated replacing the tube, but I quickly changed my mind. It really wasn’t worth the hassle since the race was so short. After a quick inspection, I noticed that my spokes were tight, so this wasn’t a repeat of the XTERRA fiasco. I decided to turn around and walk the bike out, and hopefully I would be able to just patch the tube later, in a non-race (and stress-free) setting.


As soon as I turned around and started walking, I heard another group coming down the trail. I jumped to the side of the trail to get out of the way, and I saw a rider go down pretty hard. As the other riders attempted to go around him, another guy crashed right next to him. After the rest of the group went by, I ran over to help. I asked if they were okay, and I pretty much got the same response from both of them. Their race was over, so we would all walk out of the trail. The first guy banged up his knee pretty bad, and was unable to ride. He ended up using his bike like some sort of cane. The second guy didn’t fare so well either, and he suffered what we suspected was a broken thumb (and possibly his rib.) We took the long way out, and I told them I would take care of them when we got back to the parking lot.


When we finally arrived at our destination, I flipped my bike over and asked the race volunteers for some ice (for Broken Bones Guy.) I ran over to my truck and grabbed my Bike Patrol pack, and got ready to perform some first aid. The DPC was standing by with the camera, so he captured a shot of me looking like I was about to give The Big O some surgery: 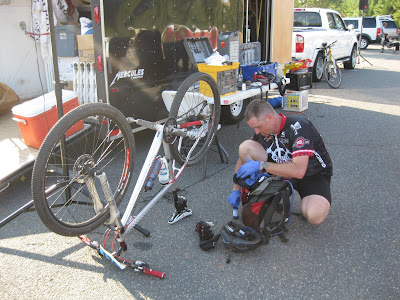 The Big O would have to wait. I tended to the wounds of the first crash victim, as the second guy applied ice to his thumb. I cleaned up the road rash, and got some ice for Twisted Knee Guy. Everyone would live to ride another day, but it might be a while. I soon realized that maybe I flatted for a reason, possibly so I could be there to assist these two crash victims. The good news is, I was able to repair the tube with my patch kit. It was only a pinch flat, so it wasn’t too serious. Still, I'm getting tired of flatting all the time. Something must be done, since I’m really sick of buying tubes every couple of days. There would be more riding on The Big O, so I wondered if my half-assed tube repair would work, or if I would suffer from more bad luck. The next stop is Wilkesboro, North Carolina. I’ll tell you all about it tomorrow. Meanwhile, Mr. Shepherd will hopefully try to get a story together about his race adventure.
Posted by TheMutt at 8:32 AM

Yes, tubeless. However, I heard that the new craze is airless tires. I'll let you know how that works out.