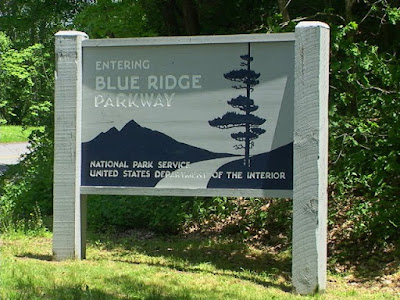 The final day of the B-43 Cycling Vacation Extravaganza saw us in the mountains again, but this time we brought along our road bikes. Since Mr. Shepherd, The Dirty Party Cycle, and I all dabble in roadie action from time to time, we decided that this would be a good way to cap off the week. We would ride on the Blue Ridge Parkway. The plan was to take two vehicles, and stage one at each end of our ride. First, we stopped at the Linville Falls Visitor Center to drop off the Dirty Party Truck. 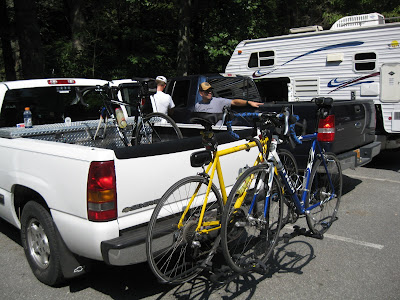 We loaded up the DPC’s road bike into my truck, and headed north to Moses Cone Memorial Park, some twenty five miles away. This would be the first time any of us have ridden on the Blue Ridge Parkway, so it was interesting to drive the route first. A short while later, we arrived at our destination and got ready. We would have plenty of time later to take in the sights at the Moses Cone house, but here is a preview: 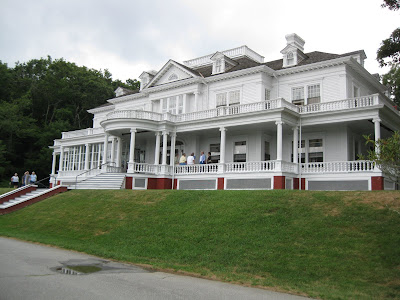 After Mr. Shepherd sparked up a conversation with someone at the park, he convinced him to take the ever-important “before” picture. 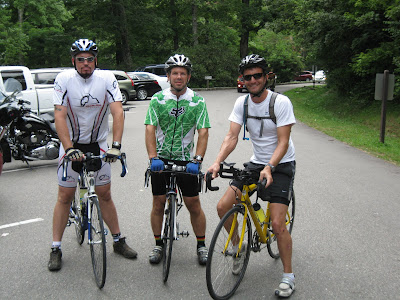 We hopped on our road bikes, and uh, hit the road. We headed south towards Linville, and prepared for a nice ride. Just in case we weren’t sure which way was South, there was a sign to help us. 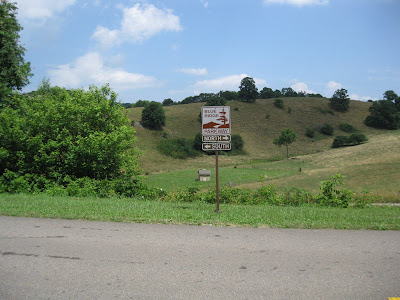 The ride started with a little downhill action, but it quickly turned to climbing. It was 8.5 miles of climbing, to be exact. It wasn’t horrible by any means, but we were still working out the kinks in our legs after all the riding we did during the days prior. Every once in a while, I would shoot up ahead to get some photos, since I needed some pics to document the ride. 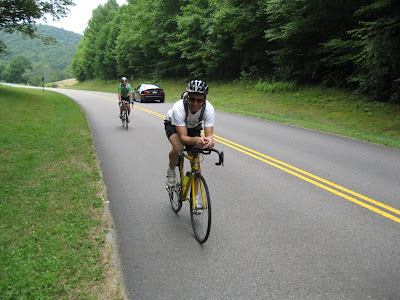 I stopped every once in a while if I saw something of interest, which led to more photos. 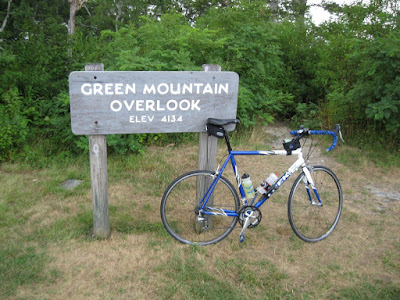 After about 10 miles, we came upon the Linn Cove Viaduct (on the side of Grandfather Mountain), which is somewhat of an engineering marvel. 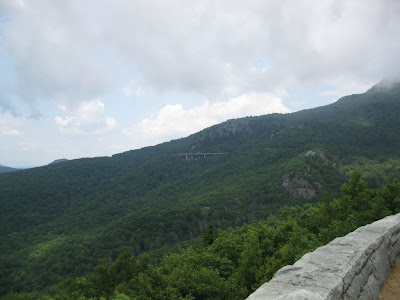 I’ve seen this plenty of times in a vehicle, but the view from a bike saddle was way more impressive. We stopped to take it all in. Since this was Mr. Shepherd’s first trip on the Parkway, we stopped to check out the surroundings. 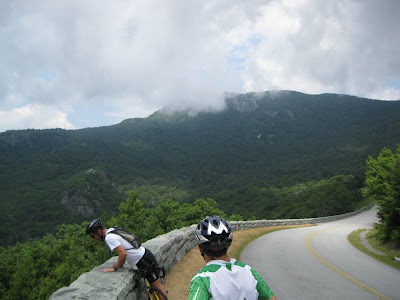 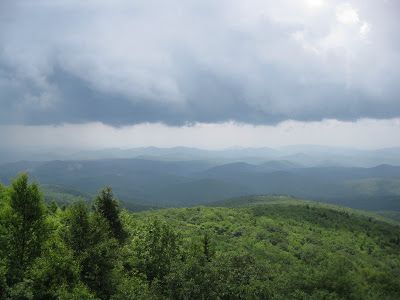 I setup the camera on the side of a wall and set the timer (and hoped like hell a swift wind wouldn’t throw my camera down into the valley below), so we could get another group shot (with Grandfather Mountain in the background no less.) 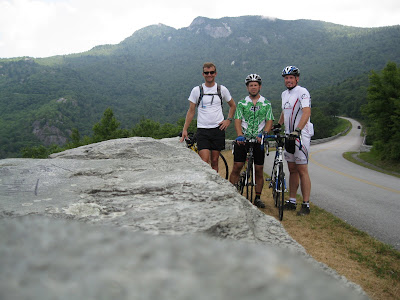 We took of on our ride again, but I kept the camera out. Since traffic was pretty light (aside from the numerous Hog Packs that actually knew how to share the road), I was able to snap so photos while I traversed the viaduct. 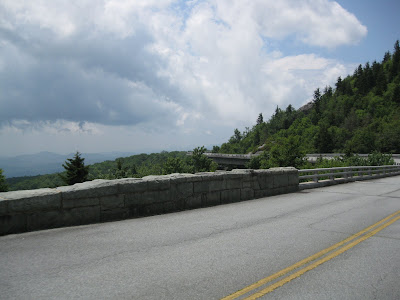 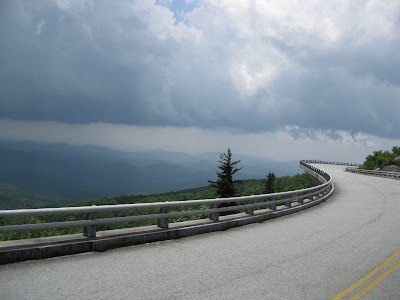 After we crossed the viaduct, the really fun downhill started. I reached speeds of 43 miles per hour (figures), and it was fun as hell. In fact, most of the rest of our trip was downhill, aside from a few short climbs. I did stop again at a viewing area to get one last look of Grandfather Mountain. 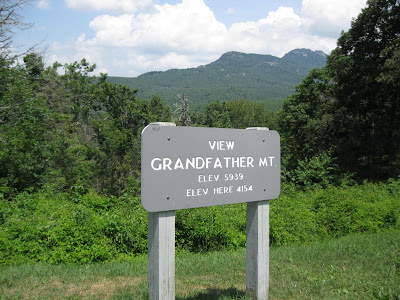 After the downhill/short climby sections, it was kind of flat. We entered into the Pisgah National Forest, but our ride would end way before we traversed it all. 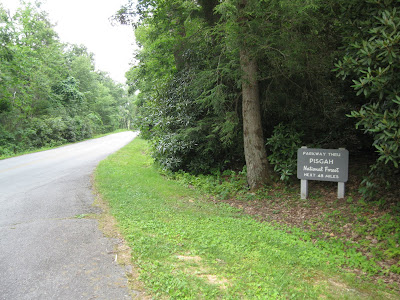 With only a few miles to go, we were feeling good. I kept the camera out and got a few more shots. 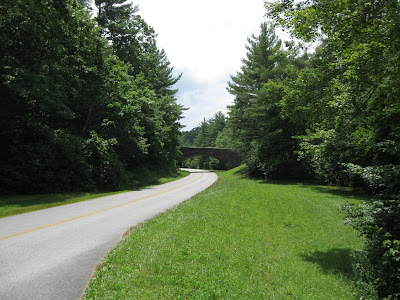 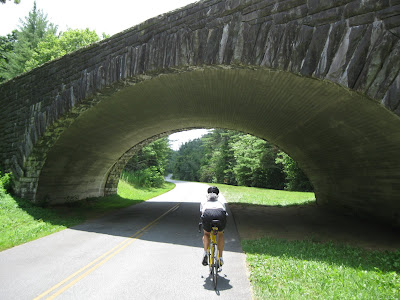 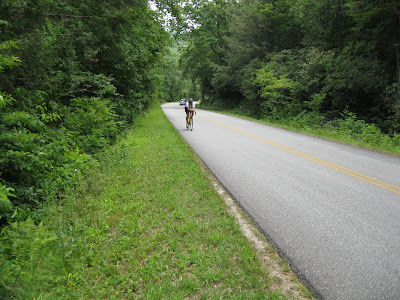 We were almost there, and a conveniently placed sign told us so: 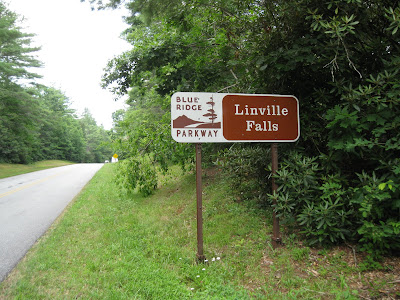 After a short, fun-filled, twenty-five mile ride, we had arrived back at the Linville Falls Visitor Center. We left a cooler there with drinks and food, so we chowed down. The best part of the day had to be this: 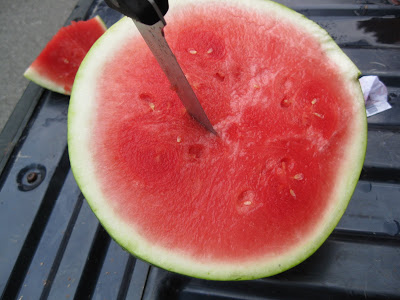 That watermelon was so good. While we were tear-assing through it, the same guy we talked to at the beginning of our ride walked up and chatted with us again. He offered to take the obligatory “after” shot, for which we were greatly appreciative. 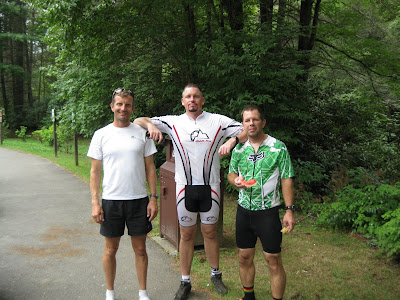 We opted to end our ride there, after only twenty five miles. We had originally considered riding back to Moses Cone, but the weather had different plans. 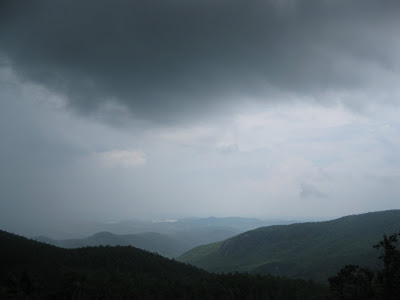 We packed up ourselves and our bikes in the Dirty Party Truck, and headed back to Moses Cone. We were satisfied that we rode what we did, especially with the chance of the skies dropping a shit storm on us. That would have been just miserable, especially if shit really did fall from the sky. Oh yeah, no flat tires this time either. We ended the day by having some good food, and drinking beer from mason jars (hey, we’re in the South.) Vacation over, but I have another one coming up in a few days. Isn’t that just grand?
Posted by TheMutt at 8:14 AM