Mr. Shepherd here. I wasn't real keen on racing during my vacation to North Carolina. I've never raced before but I figured it couldn't be as bad as the near death experience that was Kitsuma, and I'm not one to back down from a new experience. I didn't have the pre race jitters probably because I was tired from the weeks festivities and the "warm up" lap I experienced. 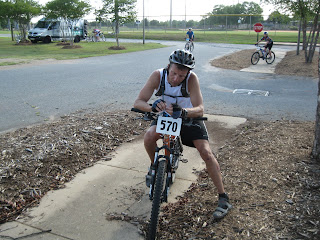 Rule #1: Don't start the race at the back of the pack. If you feel you're the slowest person out there make people pass you:)
As The Mutt said, the race started at the bottom of a gravel hill. Being from flat Florida, this wasn't how I wanted to start out. I entered the trails somewhere near the back of the pack and realized that I had made a mistake. The pace was slow and I was losing ground on the leaders.
Rule #2: If you ain't rubbin' you ain't racin'!
The trails at Renni are narrow; however, there are several spots with "go arounds" ideal for passing slower riders. I made the best of these go arounds but I was going to have to make the use of every available inch of trail if I were to make up time. I tried to pass a few riders in places that I shouldn't have and wound up crashing and losing ground.
Rule #3: Attack on the hills.
After a few attempts (with varying degrees of success) of passing, I found that it was easiest to pass on the hills when people slowed way down.
Rule #4: Keep your football on the pedal; Son nevermind them brakes!
The course at Renni is broken into North and South Loops which are separated by the parking lot. I passed most of the Back Of the Pack riders before I left the South Loop and was riding by myself in the gap created by the FOPers and the BOPers. I put the hammer down and gave it hell! 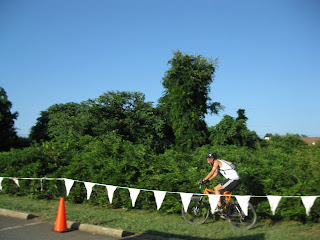 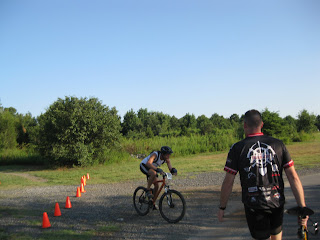 About half way through the North Loop I started to pass riders from earlier waves, and I started to wonder where I might place within my own wave. Were there riders ahead of me? Was I in the lead? I kept the hammer down and passed a few more people. As I left the trail onto the parking lot (and towards the finish line) I looked back to see how close the next rider was behind me. I didn't want to get passed on the home stretch. I had fifteen yards on him but I knew he'd push for the finish line so I cranked it up one more time until I crossed the finish line; as it turned out he was a racer in my own category. I was exhausted but not so much so that I couldn't pick up my second place medal:)
Posted by Shepherd2LostSheep at 5:16 AM

With my recent bout of flat tires, it would appear as if I was walking over to you with my pump to see if you needed any air. In my past life I was a gas station attendant. Good job on your second place, but bad job on doing it without a flat. All the cool kids are running "airless" tires these days.