Where Did I Leave Off? 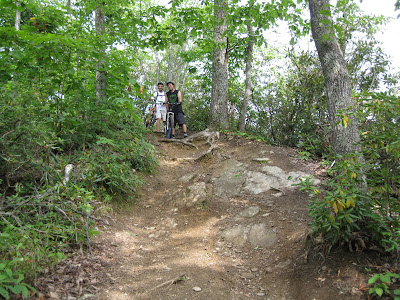 Oh yeah, the downhill action at Kitsuma. Since it was so busy last week, I played hooky on the blog for a bit. Never fear though, I’m back (with a lot of catching up to do.) Since I’m picking up where I left off, I’ll talk about the downhill fun we had on Tuesday morning. The rest of the week will probably be spent on the rest of last week. Are you following me? Good, ‘cause here we go.

As you can see from the above photo, there was some pretty gnarly stuff on the descent from the top of Kitsuma Peak. Since this terrain is a little different from the stuff we ride here in Charlotte, we did have to do the occasional hike-a-bike. It wasn’t too bad though, but the entire downhill section was enough to keep our egos in check. 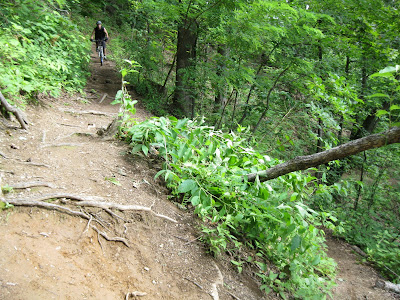 What the above picture doesn’t show was the swarm of killer bees that attacked the DPC before his descent. While Mr. Shepherd and I were waiting at the bottom for a prime photo opportunity, we heard the DPC saying, “Ow. Ow. Ow.” Mr. Shepherd called out, “Are you alright?” The DPC responded with, “Something is stinging me!” When he got to the bottom where we were waiting, we noticed a swarm of bees all over the DPC and his bike. He dropped his bike and ran back up the trail, and Mr. Shepherd distracted the bees so that they would leave us alone. We hopped back on our bikes so we could get the hell out of there, but not before the DPC got a photo of me and Mr. Shepherd: 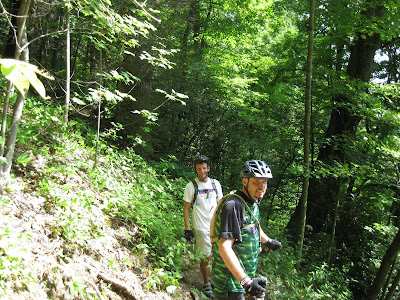 Why do we ride this crazy shit? If you think that it’s just for the super-fast technical downhill, you re partially correct. It’s definitely not for the killer bees though. One reason was for the view from the top: 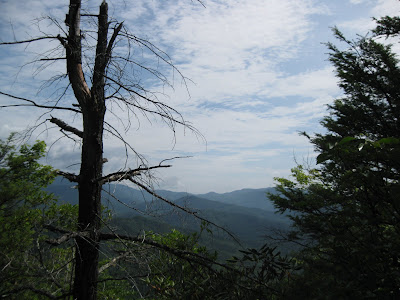 We blasted down the mountain as fast as we could after that, and we had well, a blast. We did stop at one rather scary section, just to ponder what would happen if we messed up on the ride. The DPC stood there and realized that we are lucky to be alive: 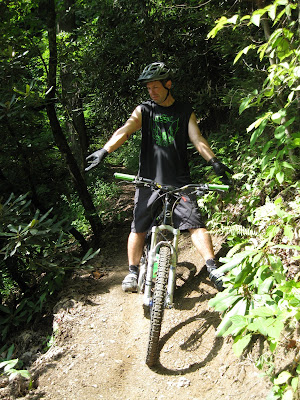 After what seemed like a time-warp, we arrived back in the parking lot. It was over before we knew it. The fun was over for now, and the climbing, technical downhill, and near-death experiences took their toll on us. Everyone hung out for a bit to refuel for the next adventure. 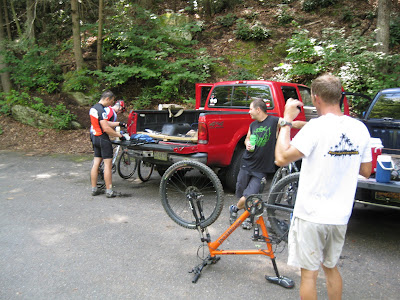 While I was eating, I noticed that a funny little winged critter took a liking to my gloves. 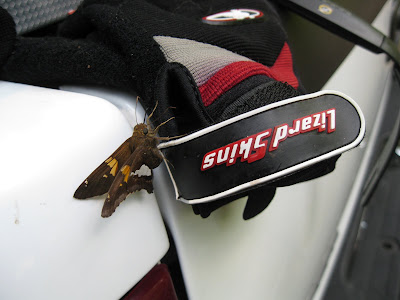 Our little group, consisting of The MadSS, BC, The Dirty Party Cycle, Mr. Shepherd, and myself had survived. The MadSS and BC decided to hit up another close-by trail, and the rest of us packed up and headed out for some lunch. We had more riding planned as well, but I’ll save that for tomorrow. One thing is for sure, I’m really sad that our week of riding is over. Being back at work just plain sucks.
Posted by TheMutt at 9:07 AM