So Far So Good

The B-43 Mountain Biking Tour is in full swing. Ever since we all finished the XTERRA Whitewater da udda day, it’s been nonstop two-wheeled action. Since we left too early yesterday morning, I didn’t have time to get on here with any kind of update (you already knew that though.) Today is different. There is no big trip planned, so we are staying local. Speaking of local, that’s how the week started off, actually. 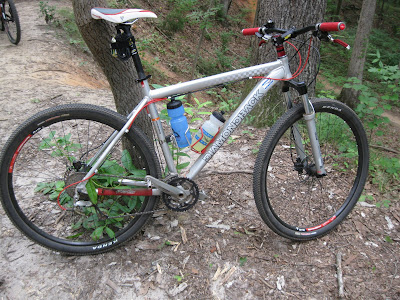 See that? Since I rode on a flat tire at the XTERRA on Sunday, I had to replace the rear one. I stopped by one of our local shops here in Charlotte to see what they had, and I found a nice pair of Kenda Small Block 8 tires for The Big O. I know, I only ruined the rear tire, but I got such a good deal on the set that I couldn’t pass it up. As you can tell from the photo above, I got them mounted and The Big O was ready to ride. What caused my flat? Well, I found that one of my spokes had worked its way loose and poked a hole in the tube. At least it was an easy fix.


Anyway, myself, Mr. Shepherd, and The Dirty Party Cycle headed out for a recovery ride on Monday, and we decided to hit up the Anne Springs Close Greenway. Mr. Shepherd has never been there before, and I think he thoroughly enjoyed it. During our trail ride, we stopped to play on one of the fun spots out there: 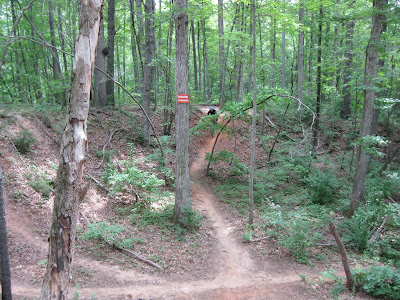 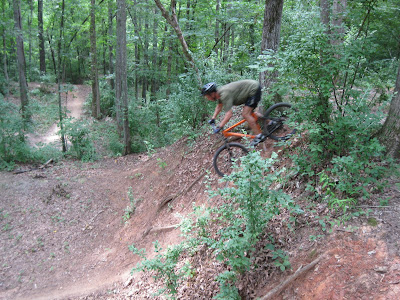 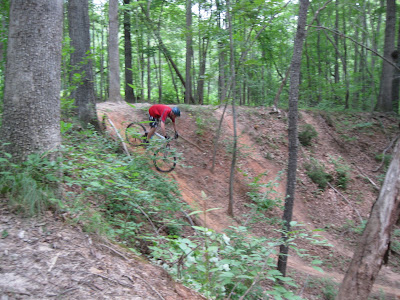 After we finished our ride, we grabbed some lunch and plotted our next adventure. We ended up heading over to Poplar Tent, since a few rain showers closed our first choice, Sherman Branch. I didn’t whip out the photographic device for that one, so there are no pretty pictures for you to see. Sorry.

Yesterday was the big one. I left the B-43 Worldwide headquarters at the crack of dark to head for the mountains, specifically, Old Fort, NC. Kitsuma was next on the list. On the drive up north, I saw my dream bike hanging off the back of an RV: 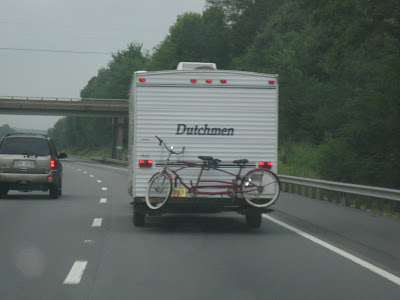 I arrived at the trailhead to find The Dirty Party Cycle, Mr. Shepherd, BC, and The MadSS waiting for me. 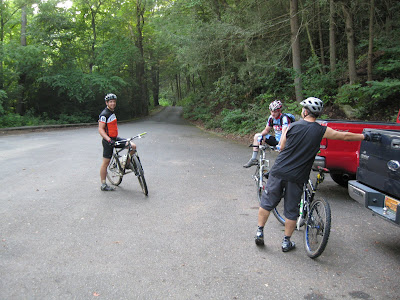 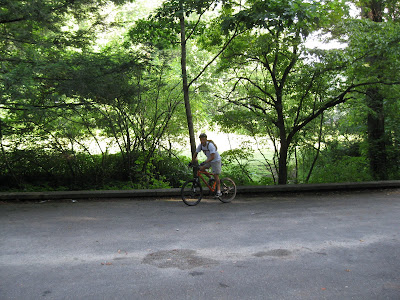 The plan was to ride to super-long climb to the top, and them bomb some crazy downhill to get back down. I knew the climb was gonna be tough, but I had no idea how bad it would be. We even had a little roadie action at first to get to the gravel road climb: 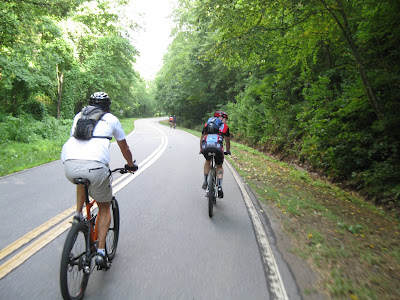 After a short road ride, we came up on a geyser on the side of the road. The MadSS and The DPC seemed to enjoy it, but it just made me want to pee. 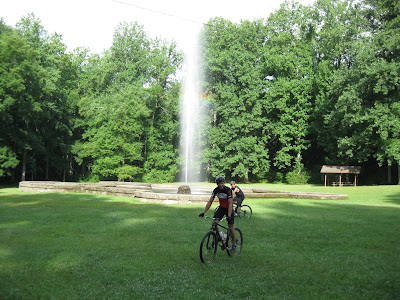 After reaching the top of the gravel road climb, I wanted to die. I was rocking my heart-rate monitor, and I frequently reached 180 beats per minute. I watched as BC and The MadSS climbed that road effortlessly, and that just impressed the shit outta me. I really need to work on my climbing I guess. Anyway, when we arrived at the top, I noticed that we were near the interstate. I saw a sign on that marked the Eastern Continental Divide, but I couldn’t make out the elevation. I'm guessing that it was over 3000 feet or so. 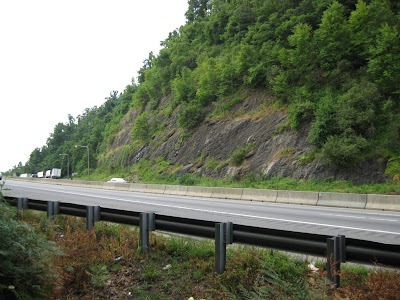 After a few minutes of traveling next to the highway, we reached the trailhead. Guess what? More climbing. This time though, it was tight, twisty singletrack. Some of it was hike a bike though, but we rode what we could. After what seemd like an hour, we reached the top. Our bikes were tired. 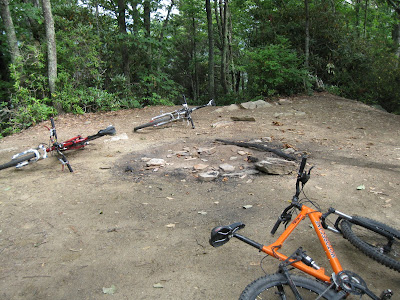 This is the fire pit where they dispose of those riders that didn’t survive the climb.


Mr. Shepherd looked for the trail, but quickly realized that this one wasn’t it: 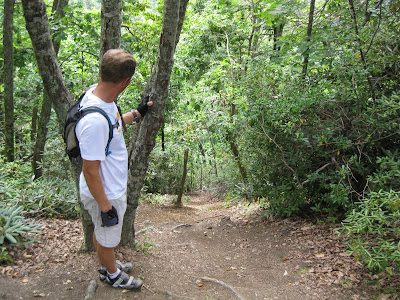 Now it was time for the downhill…finally. However, my time here is up. I’ll continue this story tomorrow, for no better reason that to keep you in suspense (and to drag it out of course.) As I plan for today’s events, you’ll be left at least one day behind. I think I planned it that way, but I’m not sure. Shit, I don’t even know what day it is anymore. Man, my legs are sore, but this is fun. Oh yeah, remember my flat tire from the XTERRA? Well, I guess I am having a string of bad luck, since I walked outside this morning to see that I have yet another flat. Damn it. 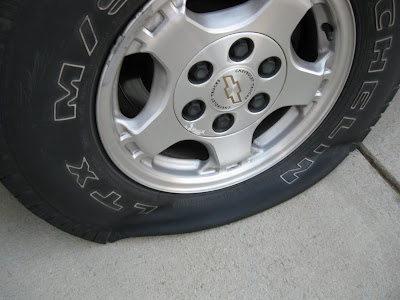