While most people hung around the house on Thanksgiving morning preparing meals large enough to feed a small country, we made other plans (we actually had a turkey dinner with all the fixins the night before.) We picked up Mr. Shepherd in the morning, and headed up to the mountains for some Turkey Day singletrack. First though, we grabbed some lunchtime grub at a local supermarket. That place was full of folks doing their last minute meal shopping for the big dinner, and some of them went all out in the wardrobe department. 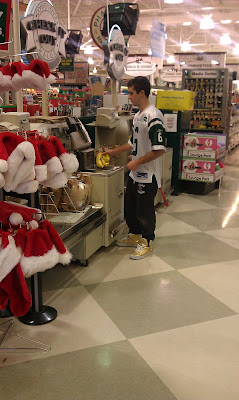 You couldn’t see it from this angle, but his pants said “Sexy” down the side. Wow.


Anyway, the plan was to ride Dark Mountain. We had plenty of reasons to be thankful, and mountain biking was one of them. Our merry little crew of myself, Mr. Shepherd, Little Miss Sunshine, and Lunchbox hit the trail on a chilly Thanksgiving morning.

Mr. Shepherd was happy to be riding back in North Carolina. 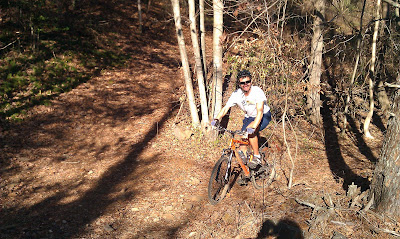 Little Miss Sunshine got to ride her Niner on those trails for the first time, and she loved it. 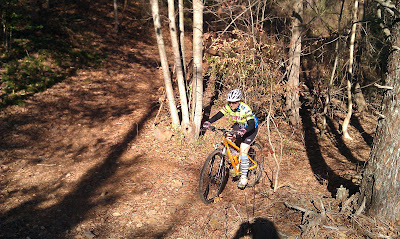 Dark Mountain is one of Lunchbox’s favorite places to ride, and he’s always glad to tag along when we go. 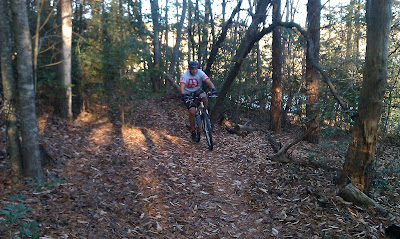 The trail was in good shape, even though there had been some rain in the area. There were quite a bit of leaves covering the singletrack though, so we made a few wrong turns here and there. Even though I was just there a week before, I had trouble finding my way around. Dumbass.


After realizing that we took one wrong turn that made us miss out on some trail, we decided to loop back around to hit it. Little Miss Sunshine decided to wait for us so she wouldn’t get lost. 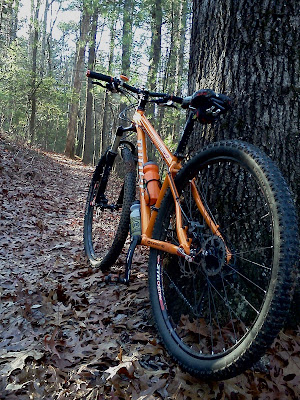 We took off on our loop, and had a good time. There was a little bit of climbing in that section, but the super fast downhill action made it all worth it. When we finally made it back to the meeting point, Little Miss Sunshine was waiting to take photographs.

She captured me in “action.” 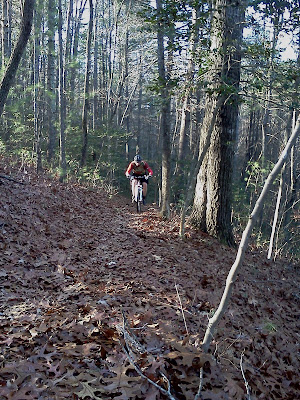 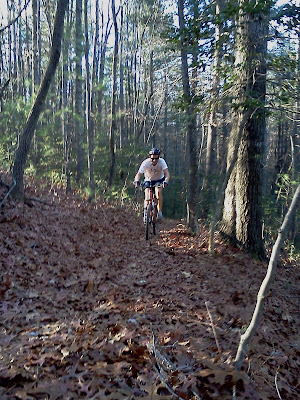 And Lunchbox was running sweep: 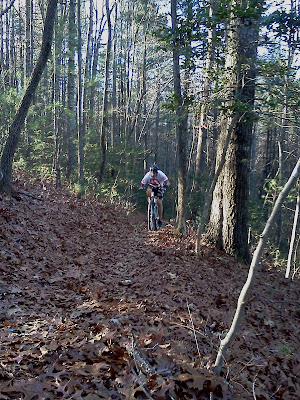 After riding on the mountain for a while, we couldn’t wait to hit the very last section. It’s full of whoop de doos, jumps, and hella fast downhill shit. Before that though, Mr. Shepherd wanted to play on the rocks. 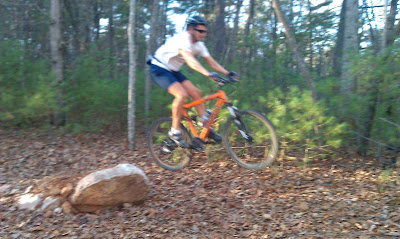 After that downhill section, we were dumped out onto the field by the lake. The sun was starting to go down on a great day of riding. 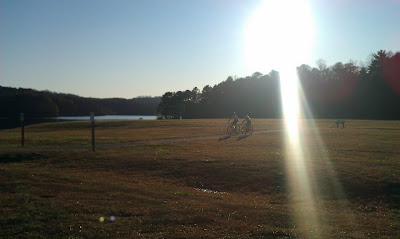 On the way home, the sun was barely visible over Lake Norman. 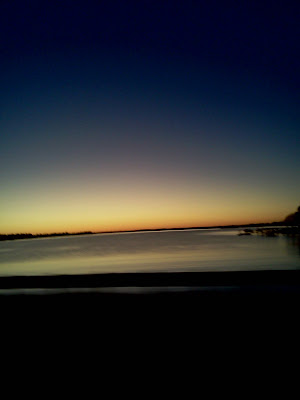 It was time for a feast, and feast we did. We had to replenish those calories we expended, right? The wife prepared a nice meal, and we ate, drank beer and wine, and reminisced about our ride. We also started planning the next day’s adventure, which would involve another road trip…this time with the Dirty Party Cycle. I’ll talk about that tomorrow.
Posted by TheMutt at 8:04 AM

So you are one of those guys that hold up traffic on I-77 to look at the lake.

Looks like fun. I ate enough turkey and fixings for 3 people.