But, it looks like I’m gonna blab it all over the Internets anyway.

Don’t worry though, I’ll use some Jedi Mind Trick action to keep you from remembering what you are about to read.

I found some land near the B-43 Worldwide Headquarters that’s just begging to have some trail on it. Actually I’ve been contemplating putting some singletrack on this particular piece of property for years, but I haven’t really been able to find the time. Now is the time.

It’s not much land, but it has potential. And while it won’t replace any of our fine local trail systems, it will be something close to the house that’s fun. The main use will probably be for top secret new parts testing, since now I usually just ride up and down the street when I install new shit. Now I can ride some “real” singletrack and do a proper test. If shit fails, then I can walk home in a matter of minutes.


Sunday was my first trail work day. I’ve walked the property several times before, and I have a good idea of how I want to route the trail. There is actually some good elevation change in there, along with the potential for technical trail features. For now though, I have to start small. 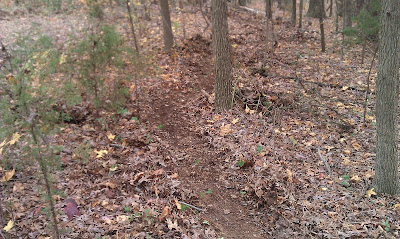 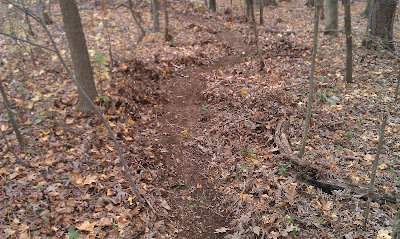 I took these photos, and did a little more finish work to the first section. After completing it, I rode back to the house to get Lunchbox. He put down his bowl of Fruity Pebbles, grabbed his bike, and we went for a little test ride.

Me: What do you think?

LB: It’s pretty fun for being so short. Can we put some jumps in?

Me: Yup. Just be here for the next trail workday.


After laying out the next section, we found some good-sized logs to use as jumps/rollovers. The plan is to cut the next section of trail this weekend, and it will have some jumps, bermed turns, and a fast downhill section. I’m pretty excited about it, which explains why I’m posting about it up here. When it’s all finished, only a privileged few will get to partake in its goodness. It’s not a destination trail by any means, but if word gets out on its location it could see more traffic than I intended. You can bet your ass I don’t plan on blabbing that all over the Internets.


It’s designed to me my own private playground, and also for Lunchbox to get in a few laps after school without having someone drive him to one of our local trails. Trailbuilding is fun, and even better when it’s so close to home. While I’m not the master of trail design and construction, this should be good for me when nothing else is rideable. I should’ve done this a long time ago.


In other news, we did another night ride last night. I didn’t get a chance to go through the photos, but if they are worth a shit then I will have a ride report. If not, then I probably won’t have a damn thing to talk about. Tune in next time to see what happens.


One last thing. Dicky did a write-up for the new Dirt Diva calendars, with lots of previews and such. Don’t worry, no women were harmed in the cropping of photos. Go check it out, but make sure your boss isn’t watching over your shoulder.
Posted by TheMutt at 8:13 AM