Instead of going up a little bit further to one of the PMBAR checkpoints, I decided that I’d rather just keep riding.  I knew that if I saw someone I knew working at said checkpoint I’d waste most of the day shooting the shit with them.  After that, I wouldn’t feel like riding anymore.  So, I turned around and headed back down Black Mountain.  I stopped when I saw this sign: 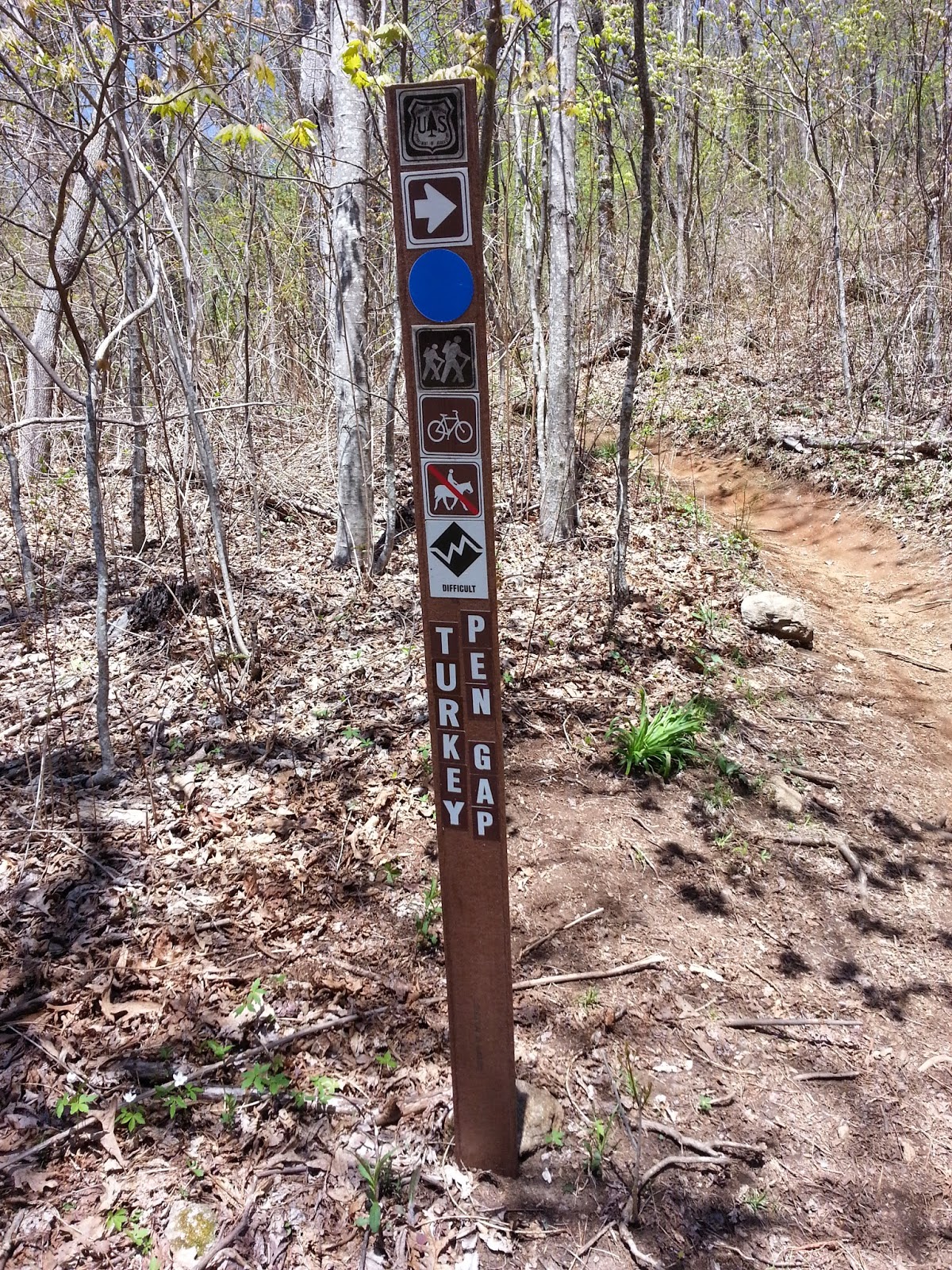 I’d never ridden Turkey Pen Gap before, but I’d heard about it.  Also, there was a checkpoint out that way so I figured that I might run into some racers.  I took off, enjoying some fun, fast downhill for a while.  There were quite a few trees down blocking the trail, and a lot of the first part was a vegetable tunnel. 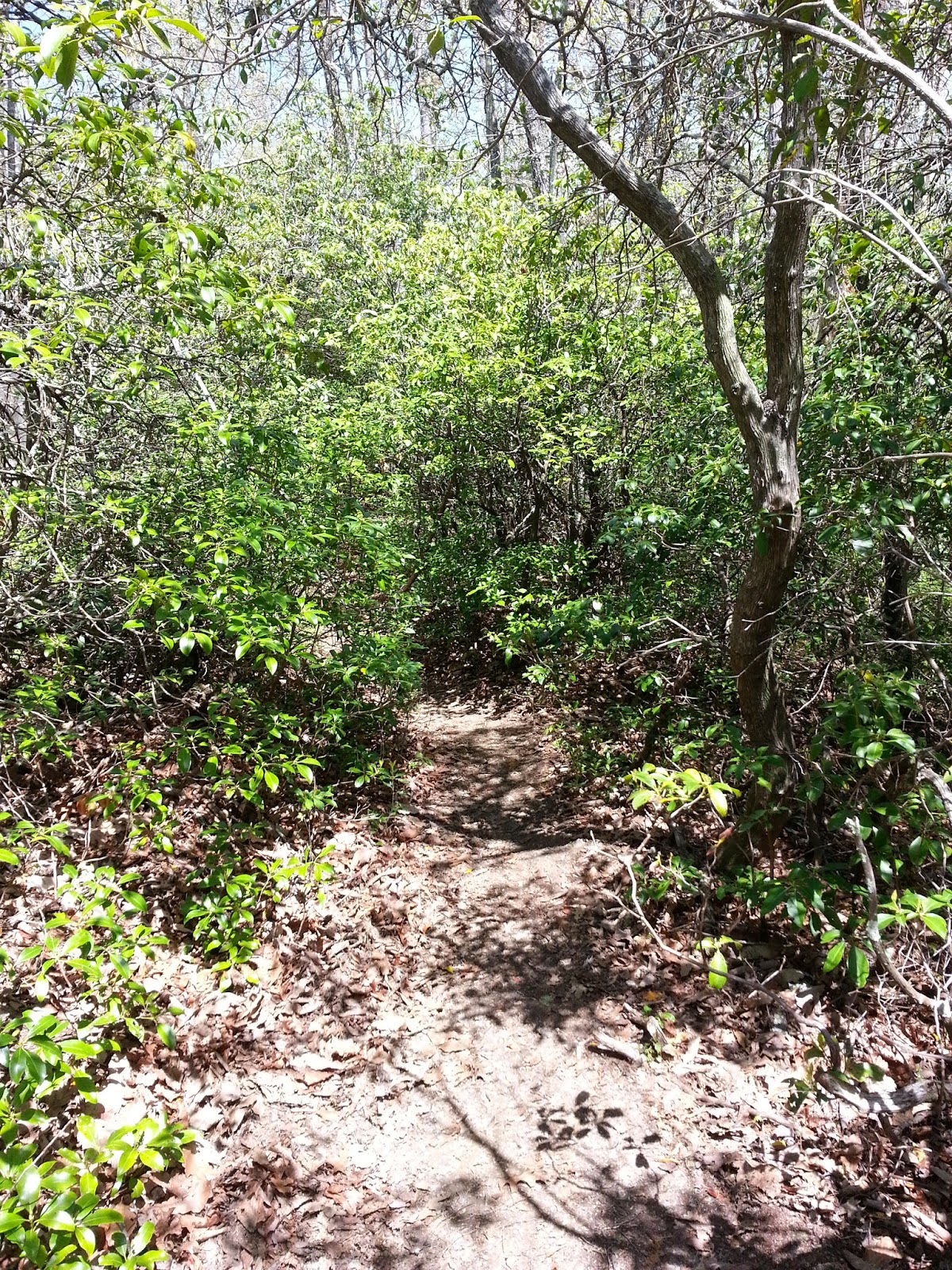 My GoPro (attached to the top of my helmet) kept getting stuck in the trees above me, nearly ripping my head off on quite a few occasions.  I decided to remove it and put it in my pack, taking it out later to record some video when the trail was a little more open.  After a long downhill I came to a big climb, and decided that I’d found a good place to hang out for a while. 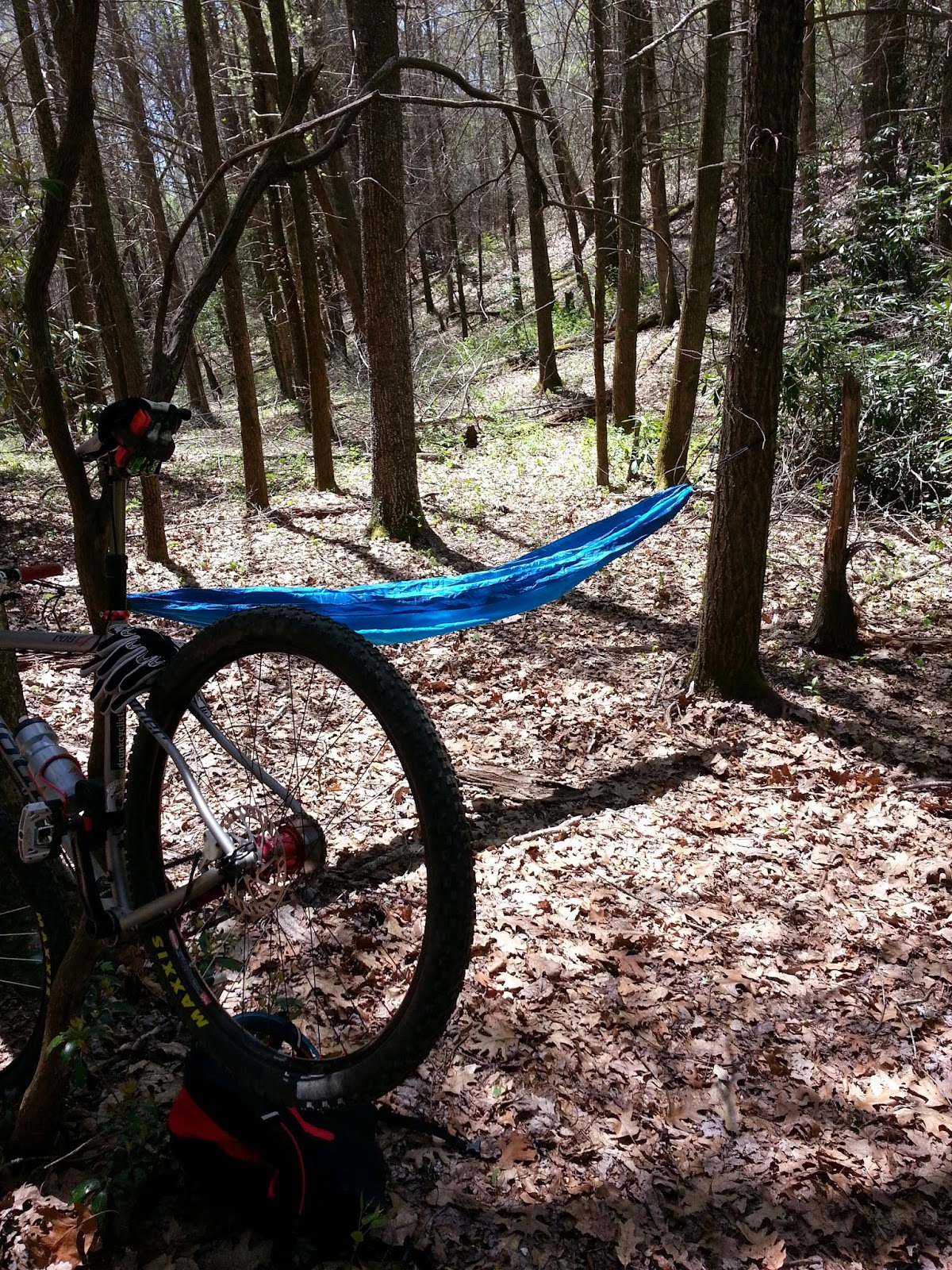 I relaxed with a beer and watched for anyone (or anything) that came by. 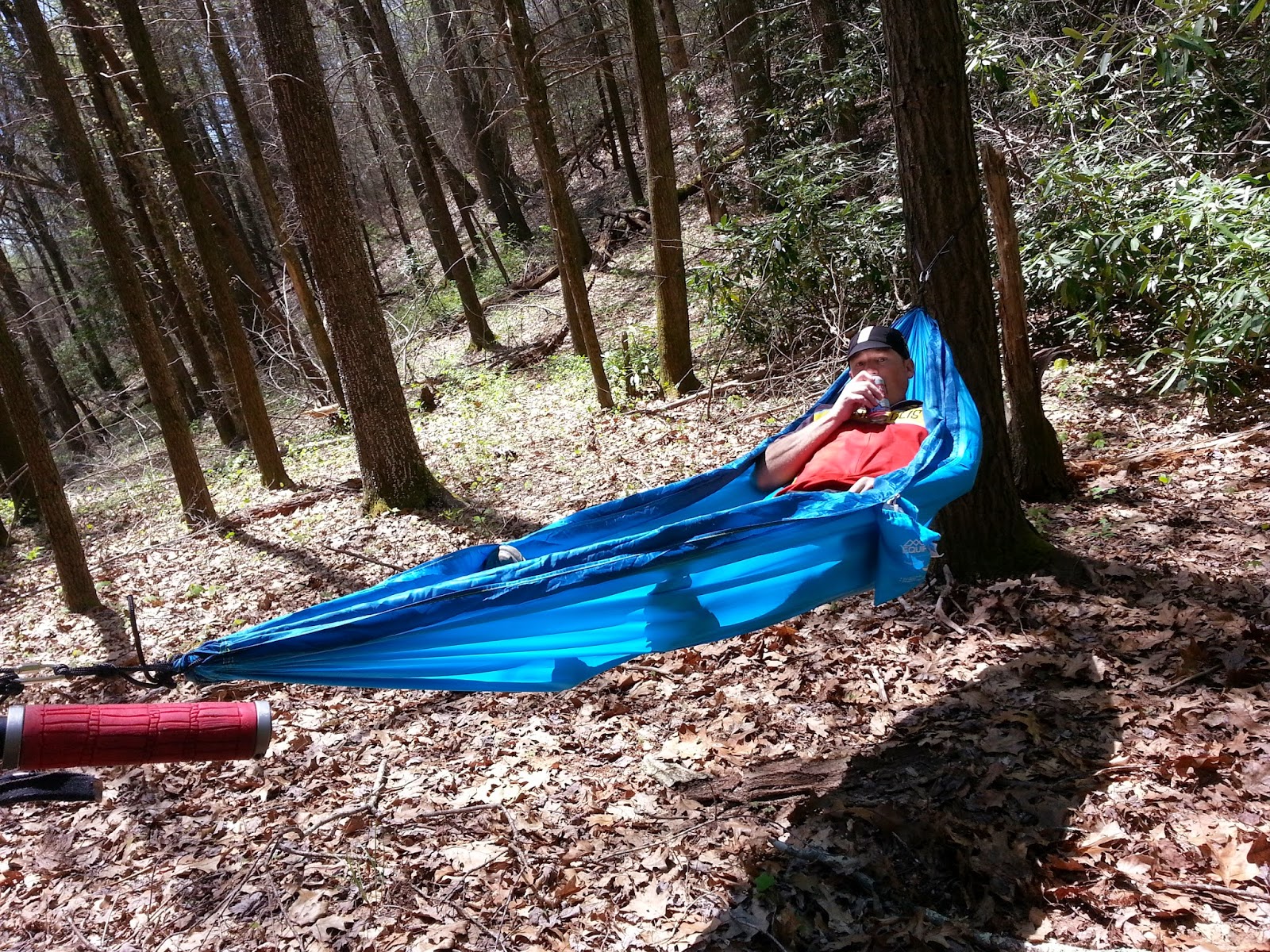 I hung out there for a good bit but no racers came by.  I heard a bear off in the distance, and I think the fact that I wasn’t making any noise made him a little curious.  The clicking sounds and rustling in the bushes started getting closer, so I decided that I probably should move on.  I mean, I set up a hammock in a bear’s living room so of course they wanted to check me out.  I really didn’t want to doze off and wake up later with a bear snuggling with me.  I’ve encountered them in the wild on camping trips before, so packing up and leaving was a little weird.  I didn’t plan to stay out there all day anyway so I climbed back on my bike and took off.

Turns out I'd setup my hammock in his bathroom, and he just wanted to go pee. 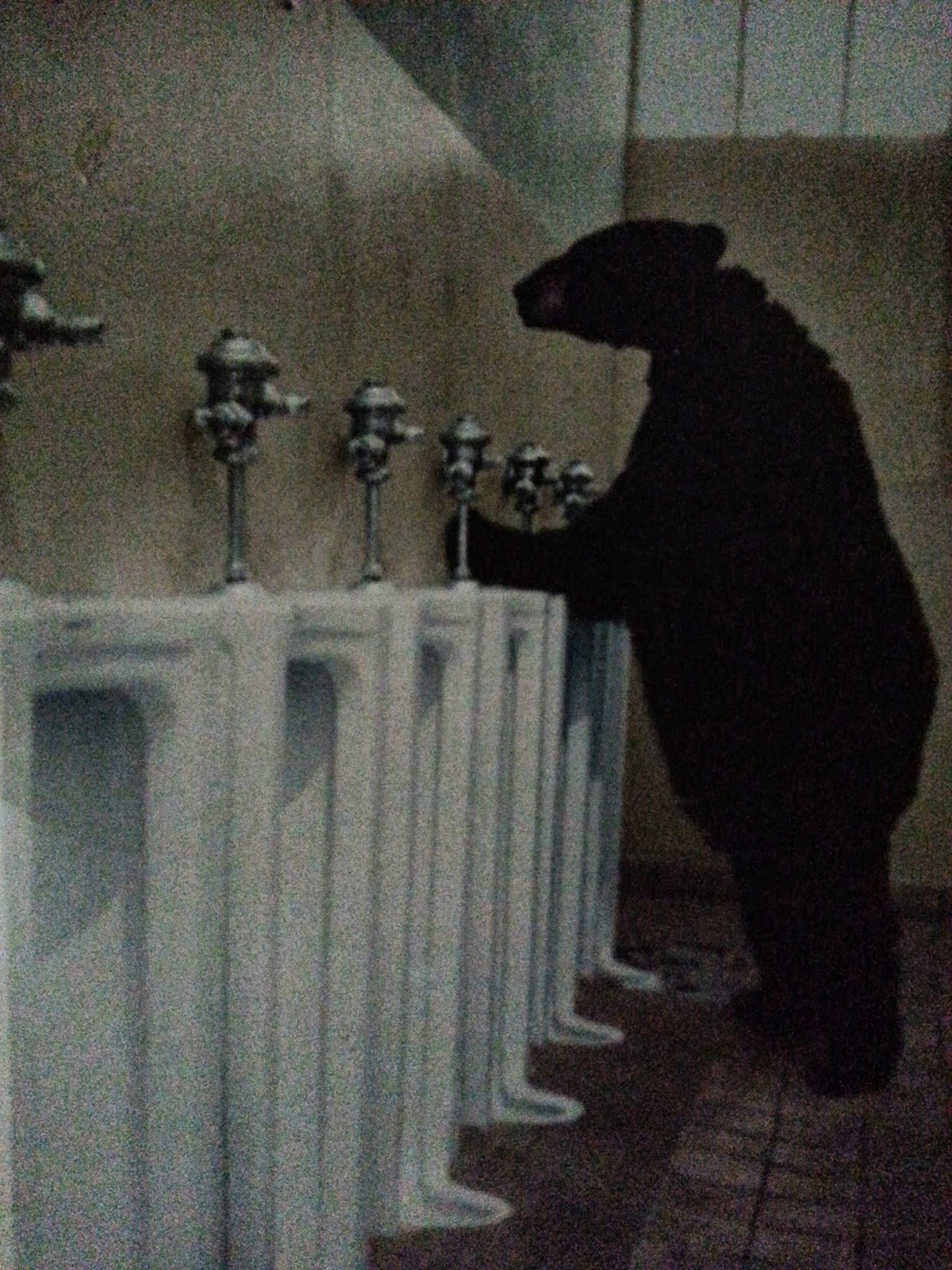 Eventually I decided that I was done riding.  I saw very few racers out there (and no one I knew), so when I ended up back at the intersection of Turkey Pen and Black I figured it was time to head back down to the Ranger station.  I mounted up my GoPro, turned it on, and set out for some rad downhill.

I rolled back to the finish line around four, and I saw that a few teams had come in.  After getting myself cleaned up I grabbed the hammock again and decided to walk back up the trail to see if I could catch some of my people riding to the finish.  I found a good spot a little bit from the end of Black, setup my hammock again, grabbed a beer, and relaxed. 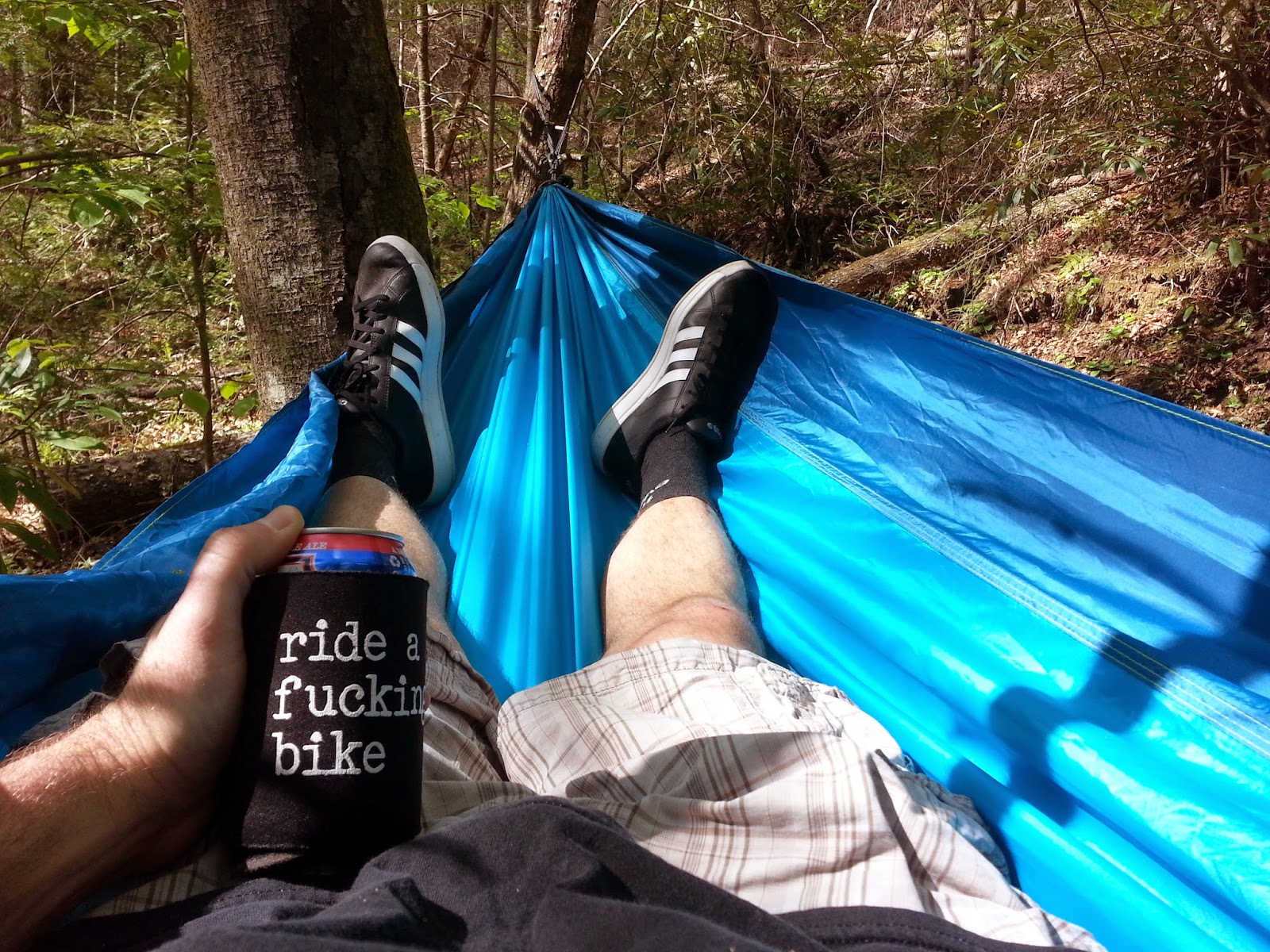 It was so peaceful. 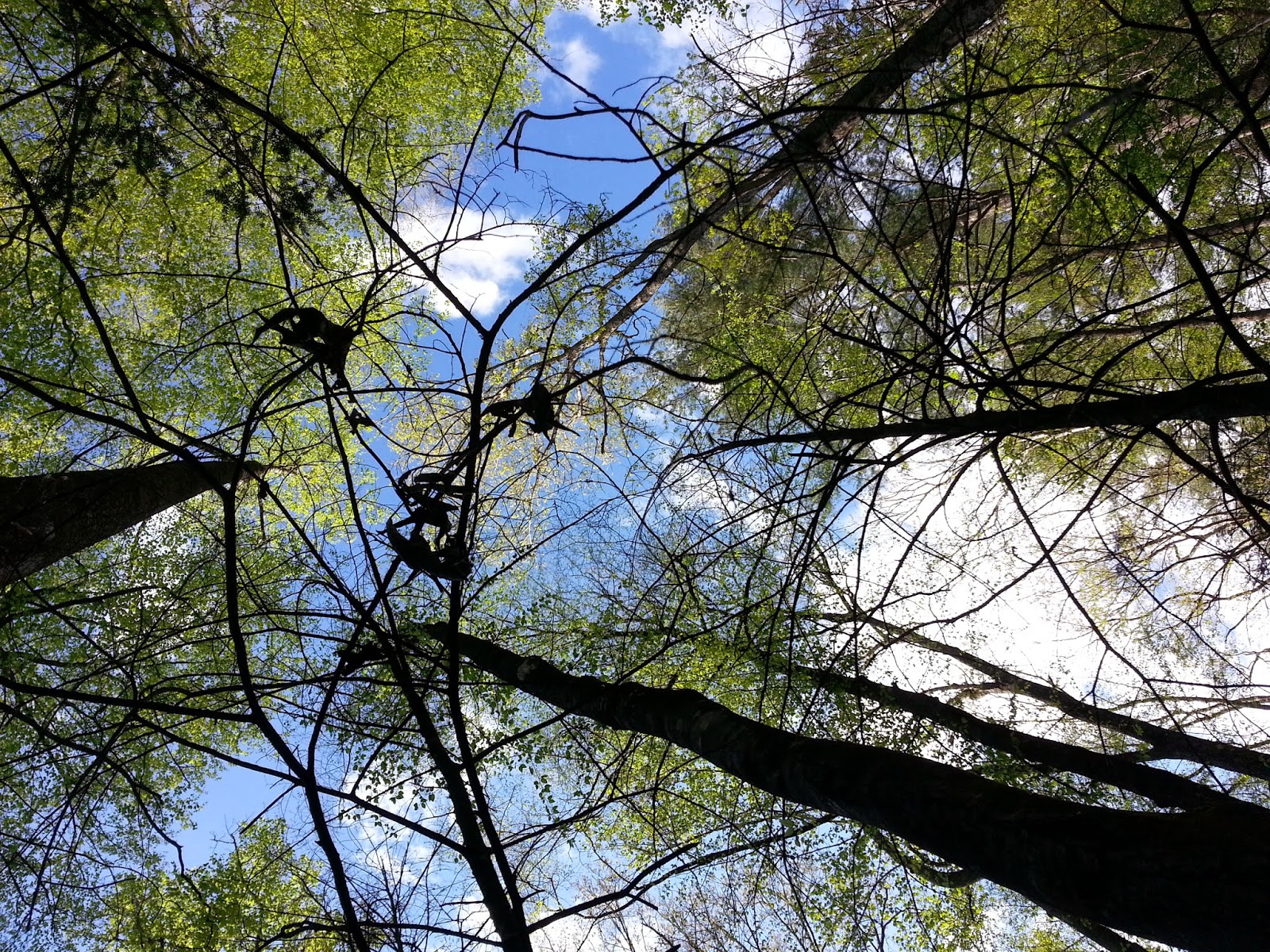 When someone would come by, I would grab the camera in case I knew them.  I saw nothing but strangers.  I fell asleep for a little bit, until some shit came crashing down from the trees. 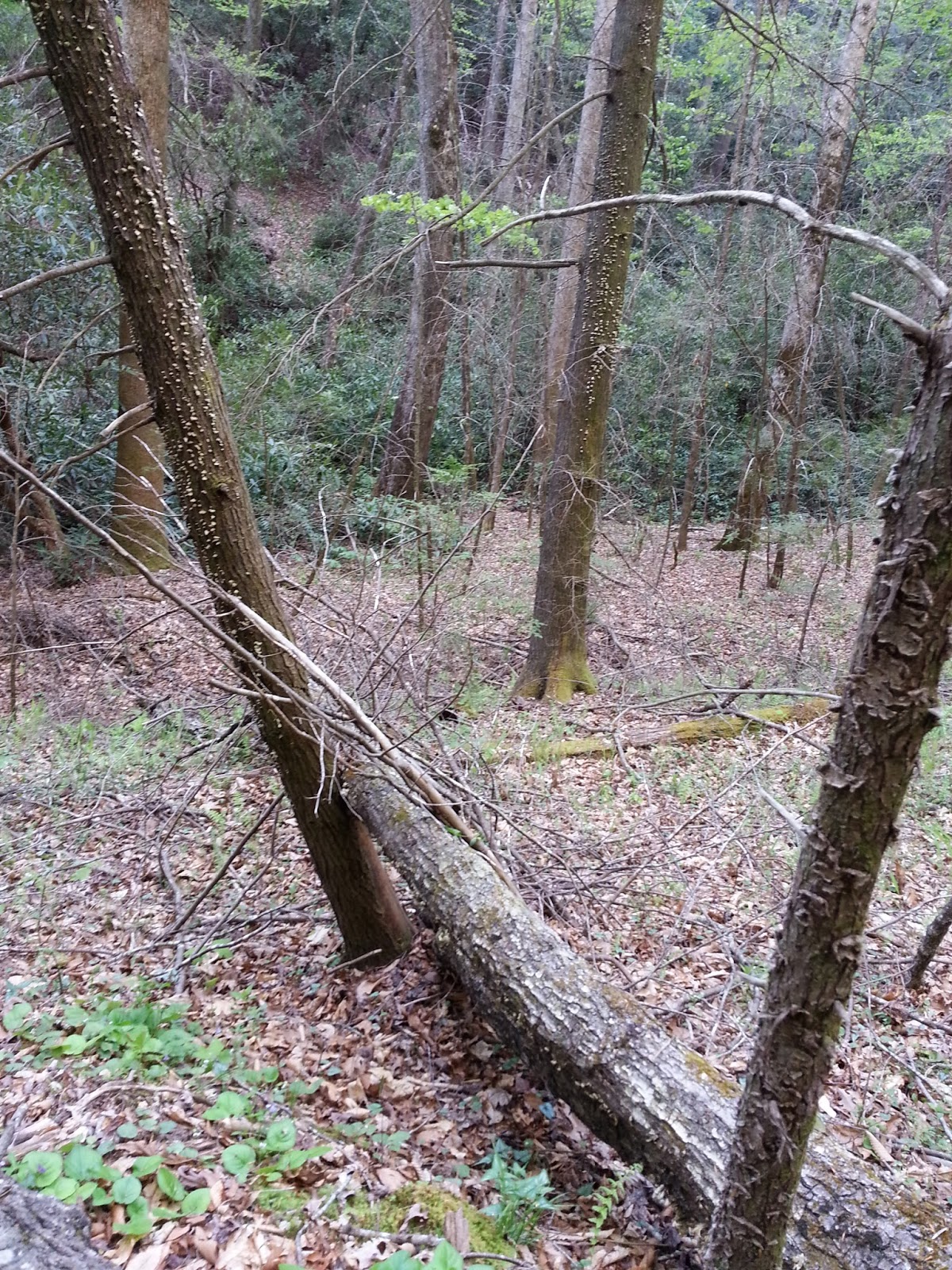 It was a really windy day, and branches were falling all over the place.  I gave myself fifteen more minutes to stay there to see if I could get a photo of anyone I knew.  Just then, I saw a familiar face. 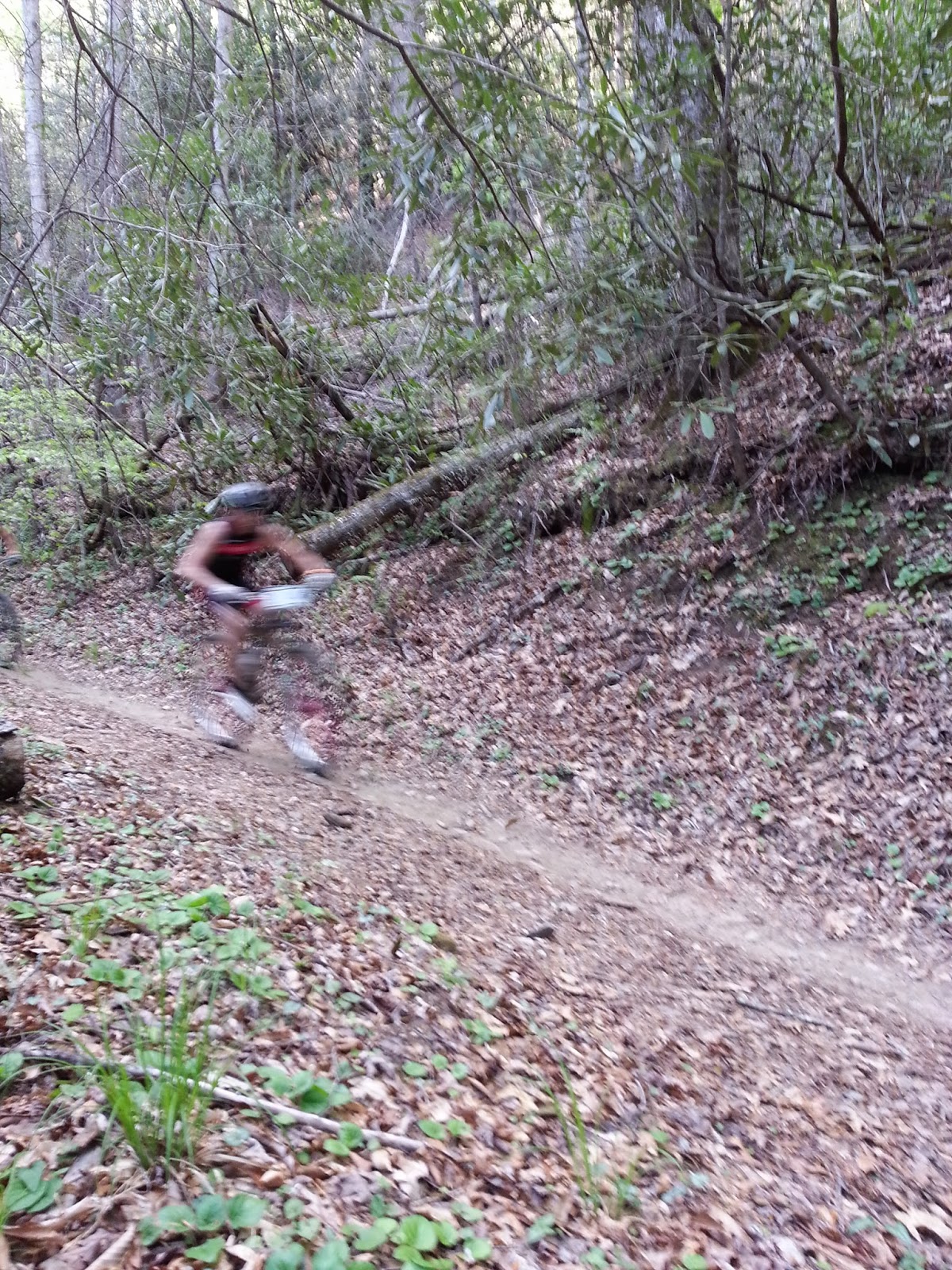 It was Dicky, hauling ass to get to the finish line.  I yelled something encouraging (too late at this point), but I don’t think he knew it was me.  Oh well, I knew who I was.

I hung out at the star/finish for a while, drank some beers, and heard some of the stories of those out there suffering.  I had a great day in the hills all by myself, and I didn’t feel one bit guilty about it.

I was a little sad to see the mountains in the mirror on the way home though. 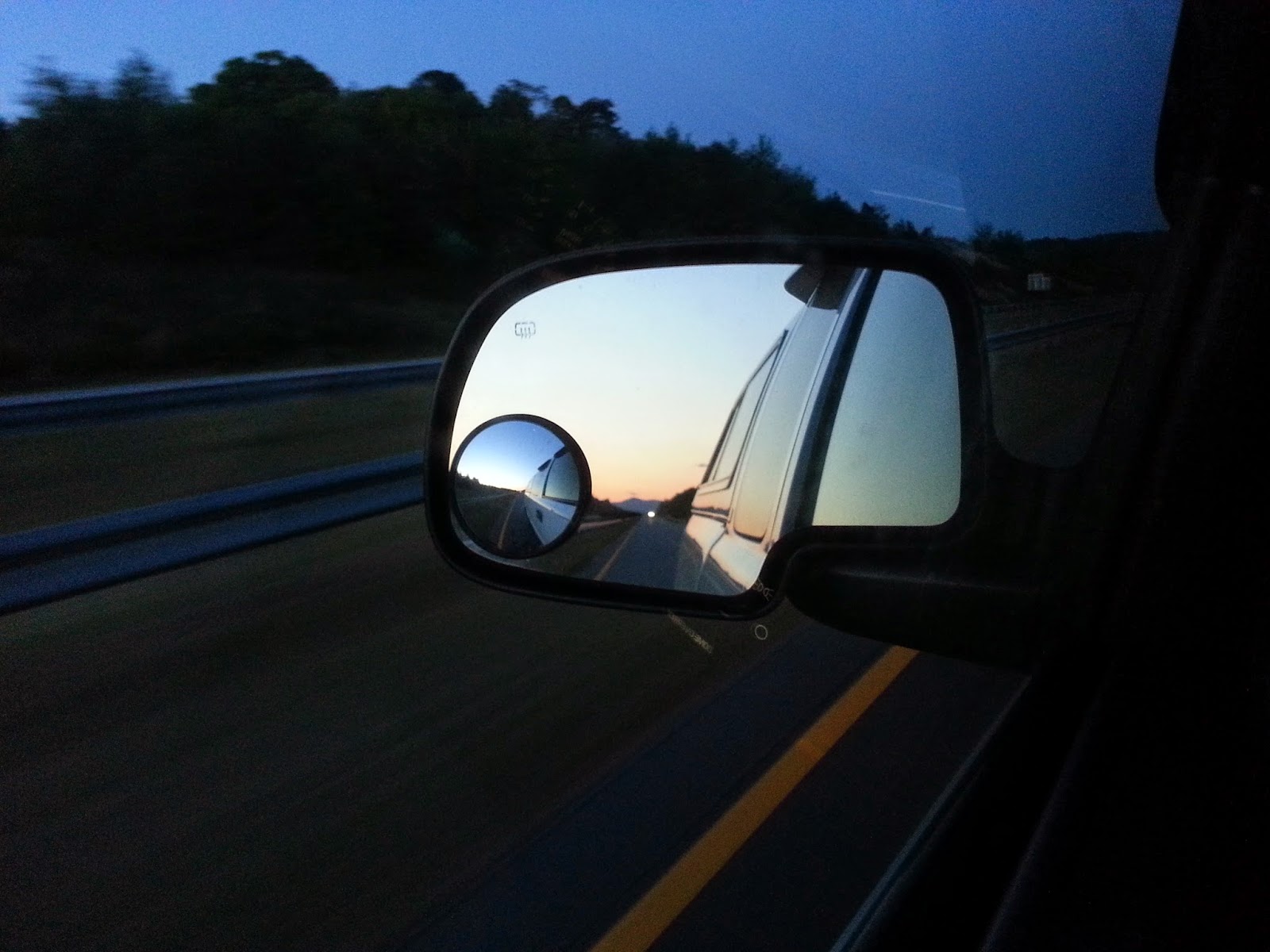 What an awesome day.  Just what I needed.
Posted by TheMutt at 8:43 AM