My shoulder is still in piss poor shape.  A lot of the pain has subsided (as long as I don’t overdo it), and the swelling has gone down a bit.  It still keeps me up at night and every once in a while it hurts like hell when I move my arm the wrong way.  However, I have a new issue and it kinda sucks.  My arm is a little numb, basically from where I injured my shoulder all the way down to my fingers.  It’s only a mild annoyance, although I guess it could be something more serious.  Little Miss Sunshine is making me follow up with my doctor, but not being the kind of person that actually likes going there I sent him an e-mail.  I haven’t heard anything back yet, and honestly I’m not that worried about it.

My Beer of the Month Club shipment showed up and I have plenty of “medicine” to make me feel better. 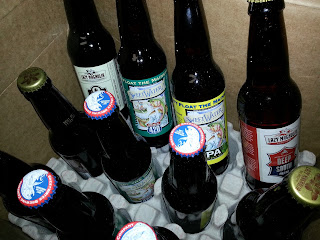 My shoulder will eventually heal (hopefully), but my bike will not.  In my accident I damaged more than myself.  I noticed that my front wheel had developed a wobble and I didn’t think it was that bad.  I’m an optimist I guess, but I figured that I would head up to my local shop and have him just straighten it out.  When I got there he proceeded to inform me that, like my shoulder, my wheel was fucked.  Luckily he had a new rim in stock, so I’m getting a fresh build (keeping my Industry Nine hubs of course.) 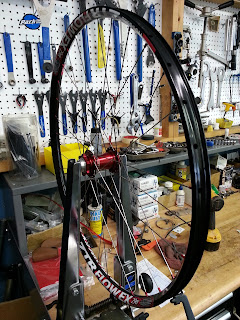 Since I’m running a rigid crabon frok now, running a Stan’sFlow EX  up front just makes sense.  I was planning to get it rebuilt anyway, so I guess this is a blessing in disguise.  I’ll have to wait a while to try it out though, because I’m off the mountain bike for a while.  You remember that, right?

When I do finally get back on the mountain bike, I’ll probably avoid the rigid for at least a few weeks.  I have a barely-used, squishy single speed that can get some love, and riding it probably won’t impede my recovery.

In the meantime, I’ve been given clearance to ride on the road.  Dreading the though of actually riding a road bike, I came up with another plan.  I took a bunch of spare parts and built myself a “town bike.”  I used an old frame from my previous frame supplier, some cross tires mounted on 29er wheels, and a mish mash of other shit to get myself rolling without having to be all roadie.  And of course, it’s a single speed.

The maiden voyage was up to the store to get some supplies, and I hooked up my beer, I mean kid trailer so I could have maximum cargo capacity. 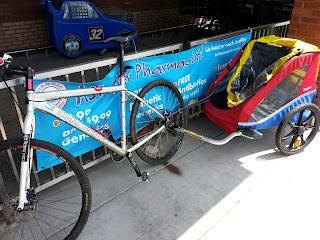 I think I can give that cart back there a run for its money.  Especially if it’s driven by a small child.

So yeah, my rides for the foreseeable future will be on that piece of shit.  Rides to and from the store and other points of interest around the neighborhood shouldn’t be too bad.  You know, because I can bring a shitload of beer along for the ride. 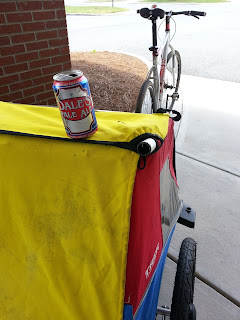 Hell, I’ve even had out it on a pub crawl already. 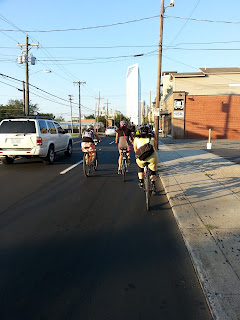 This recovery shit won’t be so bad.
Posted by TheMutt at 8:36 AM