Are you tired of hearing about Single Speed  or my busted shoulder yet?

My shoulder is a little better, by the way.  Some good old fashion ice, stretching, and self-medication have been the key to help me return to whatever the hell normal is.  The numb feeling down my arm is a little bit less today, mostly because the swelling around the nerves in my shoulder has gone down a bit.  It’s gonna take a while to heal completely I know, but I can’t wait until the next time I can actually ride my bike in the woods.  I have something big coming up in a few weeks (announcement coming next week or so), and hopefully I’ll be able to actually ride something other than the road.  I also have at least two more races before the “season” is over, but I can’t commit to them right now.

Yeah, it was fun.  I spent a shitload of (valuable?) blog space covering my journey to and from, the actual “race” itself, and all the other shit we did.  Was that enough?

Check out this video from 29nSNGL with the “lost footage.”

Lost footage?  Looks like they missed a lot of the good stuff, although there were a couple of shout outs to Drunk Cyclist in there.

In other news, with no mountain biking in store for the weekend I’ll have to find some other stuff to get into.  The most important?

Tomorrow is this little guy’s birthday: 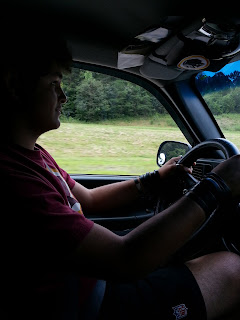 Yup, Lunchbox celebrates his anniversary of escaping from the womb.  Since he’s driving my truck in the photo above, it’s safe to say that he’s not a kid anymore.  He’ll be seventeen, which means that the time has gone by faster than a jackrabbit on moonshine.  Before too long, he’ll be off to college starting his own life adventures I guess.  He’s a great kid, and I’m glad he’s been by my side all these years.

So tomorrow, we celebrate.

See y’all Tuesday.
Posted by TheMutt at 8:20 AM