Running Out Of Things To Do

Even though it was a short week due to the “holiday” on Monday, I can’t believe I actually had enough shit to talk about.  I’m getting tired of being injured, and I’m sure you’re tired of hearing me talk about it.  Be glad it wasn’t worse I guess.

I need to get back on the trail.  Soon.  Although I love all kinds of bicycles, I just don’t feel right without singletrack under my tires.  It’s gotten so bad that I’m contemplating a long road adventure tomorrow, most likely while everyone else I know is out enjoying a trail somewhere.  I know my boys have been out tearing up the trails, and it kills me that I can’t be there with them.  They know that too, which is probably why they don’t mention it too much.

TomTom stopped by the house da udda day to check on me, and he was hesitant to mention that the crew had just been out in Pisgah for a ride.  I guess he didn’t want to tell me about it since I wasn’t able to ride, but it was nice hearing about how much fun (and suffering) they had.  I’ll be back out there real soon.  In the meantime, I’m getting my bike ready. 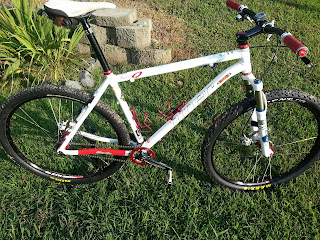 Even when I do get back on  the trail, I won’t be riding rigid for quite some time for fear of re injuring myself.  This bike is supposed to be for the actual mountains, you know, with it’s squishy fjork and all that.  I haven’t ridden it much since I took the gears off of it, but it looks like it will be my “go to” bike for the foreseeable future.

So, I put a more “local-friendly” cog on it. 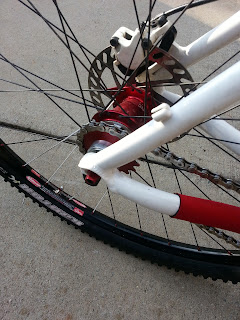 An 18 tooth cog, and of course it’s from Endless, just over there in the hills of .  Did you notice that there’s not any sort of tensioning device?  I hate those damn things, and I try to avoid using one if I can.  The trick was to ad just a little bit of “extra” to the chain. 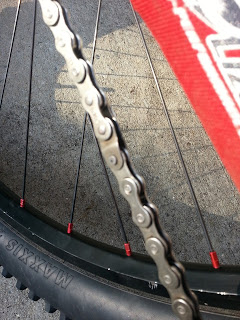 Thanks to Peter for that.

With short rides on the road and small amounts of mechanic work (due to owning single speeds), I’ve ended up with quite a bit of time on my hands.  Sure, I’ve been drinking lots of beer still, but I have to have something else going on while I do.  It’s kinda weird to drink alone, right Dicky?

So, I’ve decided to finally do something I’ve been meaning to do for many years now.  Many moons ago, I bought a brand spankin’ new guitar.  I bought a few books to tech myself to play, but I never got around to it.  I would pick it up one day, then put it down for weeks (or even a year.)  You might guess that I didn’t learn shit that way, and it became frustrating when I did pick it up again.  That’s been going on for the last ten years or so.  Well, I’ve had enough.

With all this extra time I have now, I’ve picked up the guitar once again.  This time though, I’ve actually “played” it nearly every day since I started back up.  And, I’m getting somewhere with it this time.  So much that I brought it up to Lunchbox’s room to show him what I’ve learned so far. 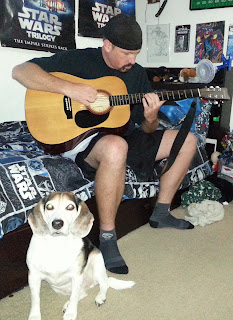 I really wish I could have Star Wars stuff in my room, but I can’t.  No fair.

I’m progressing a bit, and it looks like I may even go for some actual lessons.  Will I ever be any good at it?  Who knows.  Maybe I will, and then I can beg CroMoly to let me play with them.

Or maybe I’ll just forget about this shit when I get back on the trail.

Well then. When I can actually play we'll start a band. We can be cycling's second rock band.