Two Knives To A Gunfight


2013 6 Hour Grind on the Greenway. Six weeks to the day since my accident in Minnesota and for some reason I thought it would be a good idea to go out and “race” a rigid single speed for six hours. I'd ridden a total of three times off road since I got hurt, and that was good enough. Honestly, ready or not I just wanted to get back to as normal as possible before I went crazy. Sensing that I might have an issue riding on a rigid crabon fork for multiple rooty laps, I brought both of my single speeds. 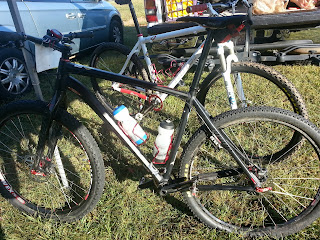 Before I get started, I have to mention that Lunchbox didn't accompany me to the race. He was busy doing teenager stuff, so I don't have any “action shots.” You'll have to rely on my words.


My morning started off with a proper breakfast. Well, most of a bag a Krispy Kreme doughnuts anyway. 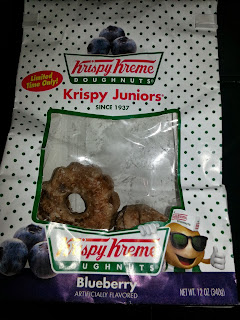 They were juniors, so it was okay that I ate almost a whole bag.


I usually eat Pop Tarts before a race, but for some reason I decided to switch it up. It worked, because when I lined up at the start I felt pretty damn awesome. So, I made a plan. Line up at the front of the group, spin my ass of on my 32X20, and ride until I can't ride anymore. I was sure it would work.


We started, and after riding around a bit in a vain attempt to spread us out I passed through the start/finish line. Three minutes in, and my legs already hurt. Without any hard efforts on a bike in weeks I thought maybe I was in for a long day of suffering.


Turns out that would be the least of my worries. We hit the singletrack and I got my breathing under control and my legs started to come around. Sitting solidly in 3rd place and feeling like I could ride all day, I didn't have a care in the world until the trail started getting a little technical. All of a sudden it was like I'd never been on a bicycle in the woods before. I was scared to death that I would crash and re-injure my shoulder, and with my confidence shot I was barely moving. Even on the downhill sections.


Before I knew it, Big Crom rolled right on by, and rather than try to chase him I decided that I could deal with fourth place. My skills and confidence would come back, I figured, but it wouldn't be soon enough. Moments later Good Guy Greg came up behind me and I let him by. I stayed with him for a while, even passing him again in a rock garden after he stopped to check his bike. He went by again, and I was left wondering why the hell I was even out there in the first place.


I rode the rest of the lap at a cautious pace, slowly starting to feel like I knew how to ride a bike again. A few people passed me here and there and I passed a few as well. With a short distance back to the finish line (and only half of a water bottle consumed), I made the decision to blow right by my tent and keep this party going. My legs still felt awesome, and my confidence was slowly coming back.


Good Guy Greg didn't stop either so I knew I was chasing him down. I had a lot more control on lap number two so I went much faster this time. As a bonus, my shoulder didn't really hurt, aside from a dull ache that was there before I started. I mashed up climbs, powered over roots, and at one point I felt like the baddest mountain biker on the planet.


Just me, my crabon fork, and one fucking gear.


I didn't see too many people on that lap, and with my new-found confidence and still strong legs I decided to bypass my pit once again. I'd only gone through one bottle at that point, and I had plenty of stuff from Honey Stinger to eat. 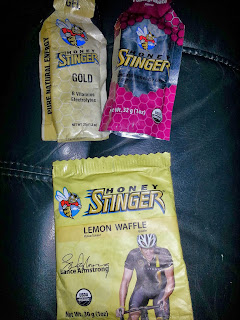 I was out on lap three and making good time. No pain, legs felt good, and my bike practically steered itself down the trail. Things couldn't get any better.


They could get worse though.