It’s when your sponsors send you shit and make fun of you at the same time. 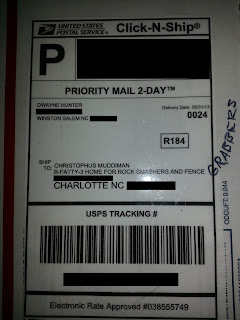 B-Fatty-3.  Love from one Clydesdale to another.

Actually, D-Wayne (of D-Wayne Hunter Design Co. fame) shipped the unsolicited package pictured above, and just like the rest of the fan mail I get I was suspicious.

My security team cleared it for entry into the house anyway. 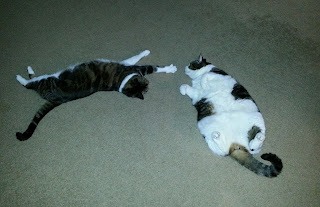 When I opened it, I found a nice surprise stuffed inside that tiny little box. 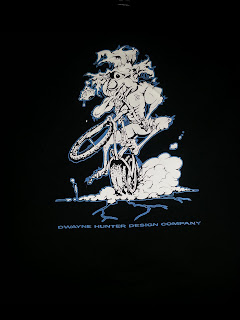 An original design by D-wayne himself, and it is sofa king rad.  Sure, other people here in received shirts with this same design before I did (including Little Miss Sunshine), but mine is better.  He had to special order thread to make it in a big boy size, and apparently that was no small task.  I guess since I haven’t been on the bike as much lately I’ve put on a few pounds.

Nah, I’m kidding.  That shirt looks good on me, even though I thought it would make me look like ten pounds of shit in a five pound bag. 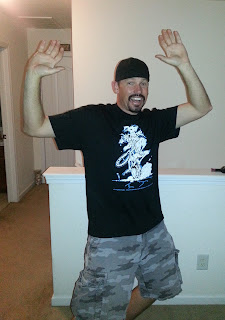 Also in there with my awesome shirt were a couple of stickers.  D-Wayne knows clowns scare the piss outta me so he made sure I had double the terror. 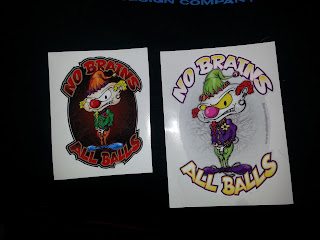 Another original design (based on a self-portrait methinks), and this shit is the creepiest of them all (creepier than my moustache even.)  I dig the design though, and even though I have an unhealthy fear of clowns I’ll make sure these get stuck on my single speeds.  Whenever I finally get back to racing, don’t be surprised to see me DNF because I ditched my bike in the woods and ran away like a little bitch.

So yeah, big thanks to Dwanye Hunter Design Company for hooking me up with some pretty awesome goodies. I will eat, sleep, and shit in that shirt from now on.  On second thought, with those clowns lurking around I probably won’t sleep at all.

Maybe as a thank you I can take him out to dinner or something.  I found a place he might like. 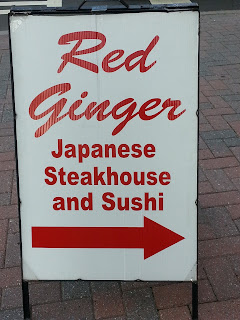 I mentioned an “announcement” da udda day.  I may wait until next week for that.

Unless the clowns get me first.

You know the clowns actually come to LIFE if you utter this magic word: "BEER"