I was gonna share some post-race thoughts and all that today, but I’ll save it for another time.  It will be soon, because I have something else to share that’s sorta related.  So instead, I’ll bore you to death with tales of what kind of race prep I did.

Since Sunday was sure to take up my whole day, the little lady wanted an “us” day.  She had it all planned out and all I had to do was drive us there.  I was down, so we left the house and headed up to Lazy5 Ranch up in Mooresville to check out the animals.  This isn’t your normal zoo or anything like that.

You drive through the herds of animals to get all up close and personal. 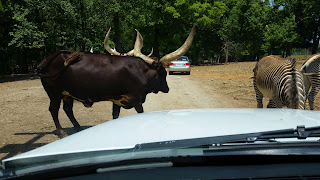 They sell you buckets of “food” (similar to what you’d get at a petting zoo), and once you drive in the critters know exactly why you’re there.  They ain’t shy either. 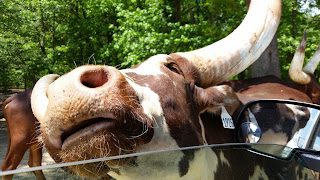 You just hold up the bucket and they stick their heads in and take whatever the hell they want (slobbering all over the interior of your vehicle sometimes too.) 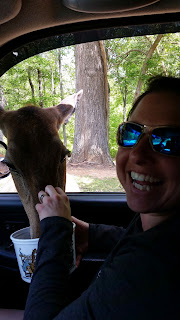 Some just stare at you.  Like this ridiculously photogenic goat: 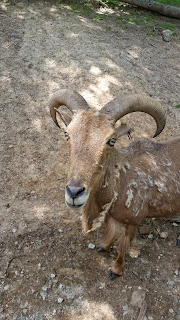 It was actually pretty neat.  We had fun and it was a nice way to spend a few hours (and more importantly, stay off my feet to give my legs a rest.)

The next stop in our journey took us to a new (to me) brewery.  Ass Clown Brewing was tucked away in an industrial area near Cornelius, and although I’d never been I'd heard a lot about it.  We walked in and I thought it had a good vibe.  The two dudes manning the bar were friendly, and offered up a flight of beer for our drinking pleasure.

They had a huge selection of beer.  So much that I had a hard time deciding.  Since I do love the IPA, I perused the menu to pick out a few to “sample.” 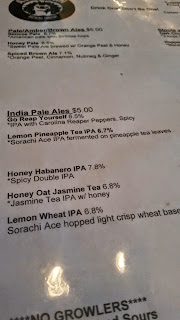 The little lady picked hers out too, and moments later we were sipping on some of their finest ales. 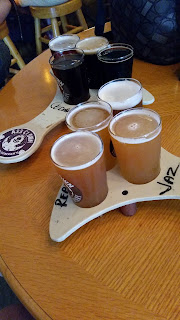 The beer was definitely different.  Not your run of the mill, “I can brew generic beer so let’s open a brewery” stuff either.  Ales brewed with orange peels and honey, IPAs with Carolina Reaper Peppers, and even a Jasmine Tea IPA made for an interesting afternoon.  I don’t normally get into putting all that extra stuff in my beer, but in this case it worked.  If you’re ever in the area, I’d suggest a visit.

The craft brew scene is certainly blowing up.  I’m not sure if that’s good or bad.  Sure, I can get craft beer almost anywhere now because of it, but so can the masses.  What concerns me the most I guess is the fact that I see young crowds in these establishments.  You know, kids that should be drinking shitty, cheap beer because they don’t know the difference yet.  I kinda feel like you should have to earn your way to drinking good beer.

I drank the shittiest of beers (Old Milwaukee's Best comes to mind) when I was a youngin’, and worked my way up through Bud, Michelob, and even Sam Adams before I could really appreciate the good stuff that brewers are making now.

That’s the way the world is now I guess.  Or maybe I’m just too old to understand.

Luckily there are a ton of craft breweries popping up everywhere so I can enjoy the good stuff and be cranky to the kids while I reminisce about the good ol’ (shitty beer) days.
Posted by TheMutt at 8:23 AM