But Carl is moar excite: 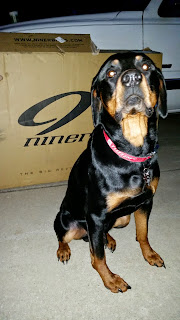 You see, Monday was New Bike Day.  One of my perks as a Niner Ambassador is that I had a chance to get a new bike.  I didn’t really need a new bike, but the temptation was there anyway.  It shipped last week, and when I got a notification from the shipper that it was delivered I got pretty giddy.

Except that I was at work and no one was home.  Shit.

I got in touch with Lunchbox, and he was heading home but not soon enough.  I didn’t like the idea of my new bike sitting in front of the house (in plain view for would be thieves), so I texted The Chili Man to see if he was around.  He was, and kindly hauled the box down to his crib for safekeeping until I arrived back home.  A few hours later I got home, went down to his house to retrieve my new toy, dragged that sumbitch up the hill to my house, and got ready to build it.  At that very moment TomTom rolled up and got to witness me opening the box.

While it did come mostly assembled, I had to make one change.  I removed the stock tires and replaced them with Maxxis Ikon (front and rear), and after a few minor mishaps I got it all together.  I rode it up and down the street to make sure shit wouldn’t fall off (it didn’t), and prepared to take it on its maiden voyage the next evening. 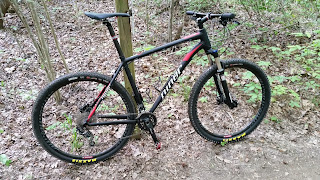 I gots a new EMD9, and yes, those are gears.  With the option to choose anything they had, I sorta went practical.  I had no use for fancy full suspension nonsense, but after racing with gears last Sunday I did have a need for those pesky things (once in a while anyway.)  Plus, as an ambassador I figured that I can show people that Niner does indeed have an affordable option instead of all crabon this and that.

One ride with a group isn’t enough to tell the whole story, but my first impression is that I really dig it.  While I’m probably never gonna be really efficient trying to shift gears, I will find them useful on really flat sections when I need some top end speed.

The handling of the EMD9 was really a nice surprise.  With basically the same geometry as my ONE9, I was comfortable digging into corners and sprinting out of them at at high rate of speed.  The front suspension will take a while for me to adjust to it, but I guess it was nice having a little bit of cushion over small bumps.  My shoulder has been hurting a lot lately from my crash nearly two years ago, so riding this will be a nice break.

I’m sure I’ll ride this thing quite a bit more around here to get a better feel for it, and I will definitely be racing on it next weekend when the Southern Classic Series resumes.  By no means am I permanently giving up single speeding, but this bike will be a nice change of pace every once in a while.  I guess that’s another reason why I got it.

Besides, single speed is dead.