Race To The River

From what I remembered about the trails Harbison State Forest, they were mostly flat with one section that had a few punchy climbs and rocks.  Since I didn’t have a big enough gear to run on my single speed, I borrowed my kid’s bike. 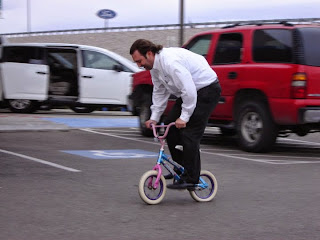 Okay, so it wasn’t like that.  You’ve all seen Lunchbox.  At 6’5” and 255 pounds, his bike is just my size.  More importantly, it has gears for the flat stuff I’d end up riding.  It sounded like a foolproof plan, especially since I had an issue with the flat stuff in my last race.  I was still nervous, but at least I knew I wouldn’t get dropped when the climbing stopped.

So, we all took off from the start line.  Down a fire road for a while, where I used all those gears to push the pace. 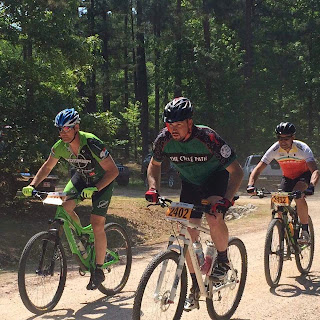 It worked for the most part, but I still ended up standing up and mashing.  I pushed hard, and when we entered the woods I was in second place.  My heart was pounding and I was out of breath.  I felt like I was dying, but the trail sorta leveled out and I was able to keep the leader in sight…

For a little while anyway.

Once the climbs started, I forgot I had gears and didn’t bother to downshift.  I tried to mash up a few steep sections and it was wearing on me.  Just then, I saw someone right behind me.  The way I felt I figured that it was the whole pack coming to get me.  Luckily, it was my old pal Jack.  We raced together a few years ago, and when he was ready to pass he said, “Just like old times.”

I tried to keep his wheel but I was wearing out fast.  There were many more climbs than I remembered, and having all those gears didn’t help since I could never remember to shift.  I had a terrible pain in my stomach and honestly, I thought my race would be over soon.  At one point I could still see the two leaders, but I was hurting so bad that I just couldn’t catch them.  I tried not to give up, even though I really wanted to.

Suddenly the trail started going down again.  It was fast and swoopy, and other than the twitchy handling of an unfamiliar bike I was having fun.  More importantly, I was recovering.  When I reached the next climb, I spun up in a reasonable gear and didn’t get too winded.  When the trail went down, I recovered again.  It just kept repeating like that until a couple of long, flat sections where I shifted into the biggest gear I had and let it fly.  My confidence was up, but I had another problem…

I was going through my water bottles too fast.

It was hot down there in South Carolina.  Even though I though I started out properly hydrated I was still really thirsty.  I tried to ration my water but my mind kept coming back to the fact that I had a long way to go and no one to hand me anything when I came through the start/finish line.  Because of that nonsense, the rest of the lap went by without me remembering much of it.  I passed through the start/finish line, hot as hell and with really tired legs.  I really didn’t think I could make it through another lap, but I wasn’t about to quit.

I was all alone for the second lap for the most part.  My back was tight, my legs were tired, and my mind wanted me to just pull over and take a nap on the side of the trail.  I was daydreaming and just going through the motions for a while, at least until I heard some voices.  On a switchback climb I looked back and saw a guy in my class gaining on me.

“Where the hell did he come from?” I asked myself.

I didn’t think I had the energy, but I dug in and tried to lose him.  Just when I thought my legs couldn’t take anymore, I saw a familiar part of the trail.  I was almost at the end!

I dug in and gave it everything else I had on the final two miles, crossing the finish line with nothing left.  My head was spinning and I was really dehydrated, but I finished.  And, my effort was good enough to get on the box. 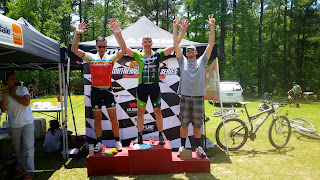 I really didn’t expect to win, so third place made me happy.  With a goal of only one podium trip per “season”, I’ve gone above and beyond what I expected so far.

And I have another race coming up in two weeks.

Tomorrow, maybe I’ll get into some details about gears, the “loaner” bike, and the actual event.