I’ve missed a few days.  I had some things going on.  Some good stuff too.  Who gives a shit.

Anyway, I’ve mentioned several times before about riding on the local unfinished interstate near my house.  The latest news on it is that it’s currently “on schedule” to be finished by the end of this month.  I really enjoy riding on it because I don’t have to worry about getting run off the road by drivers and I can take up as much of whichever lane I choose.  I figured that I better get in one last ride. 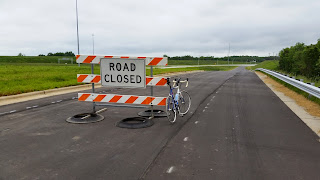 Closed to cars, yes.  Who gives a shit.

The ride there is relatively short, but when I got on the wide open interstate I let it go.  It was nice as usual.  I went all the way from one end to the other as far as the barricades would let me (and traffic from the “finished” road.)  If you do it twice it’s almost fourteen miles. 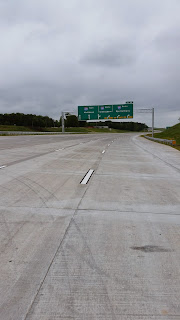 While I don’t normally believe the reports of being “on time”  for projects like this, looking around I could tell that they might be right this time.  The road is complete, and the only thing left was to paint a few lines here and there.

Most of them were done though. 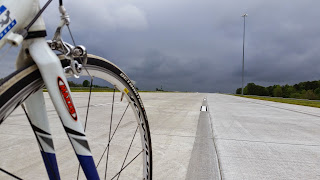 Check out those clouds.  It started to turn shitty after I got back on regular roads, but riding in the rain didn’t bother me too much.  What did bother me is the fact that I’m losing my private training road to “real” traffic.  At least I did get to enjoy the shit out of it for the last few years though.

Training kinda sucks, but things like this can make it a little bit better.

Aren’t you glad I took a few days off from here?