I don’t like training.  In fact, I don’t know too many people that do.  Among those that do “like” it, most of them are probably full of shit.  You might think that you like working hard and denying yourself life’s simple pleasures, but the reality is that you only like the end result (better body, increased performance during races, fame and fortune gained by getting on the podium, etc.)  It’s okay to bullshit yourself.  Seriously.

What the hell are you talking about?

People lie to themselves and make up excuses all the time:

I’m not that overweight.
I’ll work out tomorrow.
It’s too cold (or hot) to ride.
I’m on a new diet that doesn’t require me to workout to lose weight.

You get the picture.  We’re all guilty of it.  Job stress, injuries, laziness…all these things pop up and create one helluva reason to keep you from getting up off of your ass.  It’s more fun for me to sit around all night drinking beer than it is to drag my ass outside when it’s 20 degrees outside to do “hill repeats.”  Who the hell wants to do that?

A very long time ago, I loved to work out.  A habit I gained from being in the Army turned into religious fitness routines, including running several miles a day and lifting heavy weights until (I thought) I looked good in the mirror.  Then at some point, it became boring.  I wanted to do something “fun.”

I was skateboarding pretty regularly, and one day starting riding mountain bikes.  That was fun.  It was hard though.  Climbing, riding longer distances each time, and learning new skills required hard work.  I just didn’t realize it at the time because I was having so much fun.  It was then that I decided that I should start trying to fool myself.

If it’s fun, it’s not working out.  If I tricked myself into doing fun stuff that was actually hard work, I could gain fitness without getting bored with it.  That’s what I’ve been using ever since and it works.

I haz Klunker bike.  It was fun to build/resurrect it from the dead, and it’s a hoot to ride.  I built it just to cruise around town, and it was meant to spend most of it’s time on greenways and other flat stuff.  However, if I take it to places I never initially intended, it’s pretty damn tough to ride. 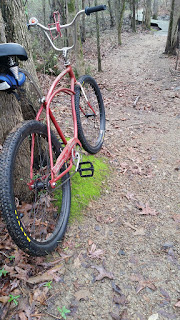 Hills, rocks, roots, and all that other happy horseshit makes for a tough, yet fun ride.  It’s heavy as hell, and the gearing is ridiculously hard on hills.  That makes climbing as tough as a two dollar steak.  So while I’m getting a good workout (and damn near burning off my legs in the process) I’m having an awesome time since I’m on my “fun” bike.

See what I did there?

It works, so yeah, I’ll be riding the Klunker a lot more in preparation for the upcoming season.  I’ll also be spending a lot of time on my road bike, although I have no idea how to make that fun again.  I’m open to suggestions, although I’ll probably be able to figure something out.  And don’t worry, I’ll be on my mountain bikes plenty.  Maybe even in the actual mountains too.

In the meantime, maybe you should think about lying to yourself to get your lazy ass in gear.  That’s how you get ahead in life.

I'm no expert. Obviously.
Posted by TheMutt at 8:18 AM

This will work Chris. Tie a 20# dumbell to the back and do hill repeats. Hell when you get back on the "light" bike you'll fly past everyone.

HAHA! Guess I don't lie to myself too often! :O That's why I'd rather ride my bike or do trail work. Both are fun but don't feel like working out. MOAR FUN is also riding a CX bike half on the road and half on the mtb trails. :)